America is at least as violent today as in the 1960s. 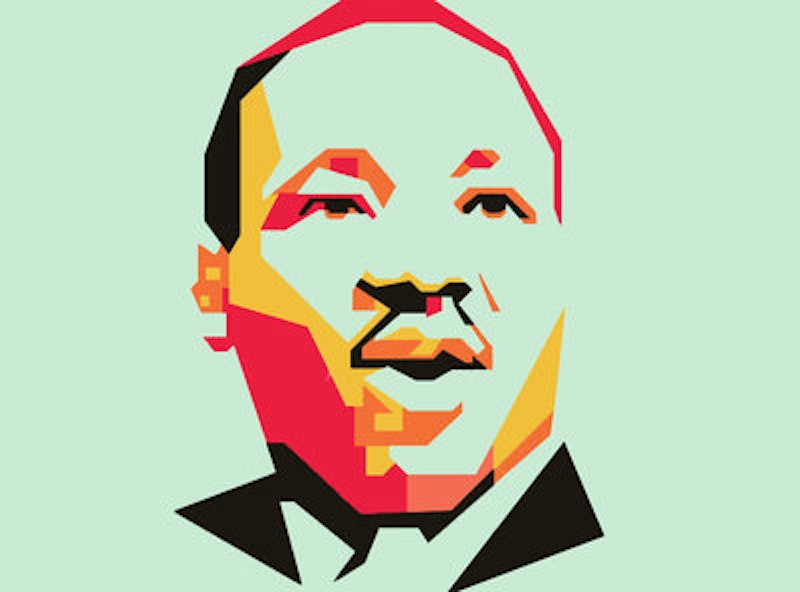 As my children slid through the American education system, they were treated at least yearly to hagiographies of Martin Luther King, Jr., in films, textbooks, and field trips. It’s been a standard of American education for decades, perhaps the most consistent element of an anti-racist training that only a few backwoods homeschoolers could possibly have avoided. The tributes have flowed in all media since the 1970s, as they did yet again last week, on the 50th anniversary of King's death.

Commentators said over and over that King is the most universally idolized American: our icon, a kind of essence of our identity and aspiration. And yet, as many commentators also noted, the society that produced and hyperbolically praised all those King representations—the movie Selma, for example—is still a racially divided society, almost as segregated residentially and educationally as it was in King's time, still bedeviled by questions of race and law enforcement.

Many or even most Americans purport to admire King's non-violence, but America is at least as violent as it was in the 1960s, and is engaged in military interventions all over the world. People often regarded Barack Obama's election as the realization of King's dream: "Martin marched so Barack could run." But Barack could pay tribute to King in the morning, and in the evening order a drone strike or a wave of deportations.

In other words—and this runs far beyond King—we’re a society in which the representations have come radically apart from the reality, in which the values that are presented to us in words and pictures are nothing like the values we actually apply in the world. This is a very typical human situation: Caligula is represented as a god, and behaves like a beast; North Korea represents itself on television as an egalitarian paradise, but its starving people know differently; every cast of every children's show, and every workplace on every sitcom is diverse, which has no effect on any particular office or group of friends.

I think people wonder how racism or sexism could persist in the face of 40 years of Sesame Street. This is an astonishing confusion.

Pundits and politicians typically blame representations—pictures, films, television programs, social media posts—for reality and prescribe fixing representations as the way to fix realities. Facebook, with its insidious memes, is to blame for the election of Donald Trump, for example. Violent music or video games lead to school shootings. We could fix our children if we could fix their textbooks or their television programming. This has gone on for decades, and I’d bet that somebody blamed the World Wars, or the Depression, on radio or the telephone.

The idea that representations alter the world, or indeed that the world actually consists of representations, makes leftists blame Fox News, and rightists blame "mainstream media," for just about anything. It makes columnists for the Guardian think that fixing award shows is striking a substantive blow for social justice. It made people greet Black Panther as though it were the Poor People's March on Washington. Now, perhaps Black Panther enhanced someone's self-esteem to some extent for a brief period, or until the next barrier or put-down emerged. If you want to do that in some sustained way (as the Marcus Garvey movement did, for example), you're going to have to actually do something, not just sit in a theater gazing at state-of-the-art CGI effects.

Here's an assertion: you could have a completely, beautifully politically correct media in every single respect, and not have any effect on the ground, or have only effects that run directly counter to what you are trying to accomplish. Every cast of every film and television show could embody diversity of all kinds, and draw uplifting lessons at the end of each episode, and we could still live in a society riddled with all the same prejudices. It would be a society, however, that (except for the people on the receiving end of the bigotry) was perfectly self-deluded, that believed that it had overcome its racism, sexism, homophobia, ableism, and whatever other prejudices it possessed, while possessing them all the same.

This has happened with race, and the representations of King are an excellent example. In proclaiming their admiration for King non-stop for decades, many white people convinced themselves that they couldn’t possibly still harbor racist attitudes, or even that American society as a whole was overcoming or had already overcome its race problem. Meanwhile the problem ticked along.

Representations can depict reality, or they can distort and disguise it, and they often do. But their ability to re-make the world is excruciatingly, limited. You could make a CGI utopia, and you could even force people to experience it, or try to prohibit them from experiencing anything else. Everyone can chant together their admiration for King, mechanically, in an endless repetition. But reality—the hard truths about ourselves and about our world—can't be fixed by wishing or by drawing a prettier picture. It can't be fixed by giving kids a compulsory reading list, or another film about King, or by boycotting Roseanne, or by editing the memes on Facebook.

We've blamed television, video games, comic books, music and now, incessantly, social media, for all that ails us. But looking at the uses of King and a thousand other matters ought to have shown us that our reality is not as easy to erase and revise as our pictures.