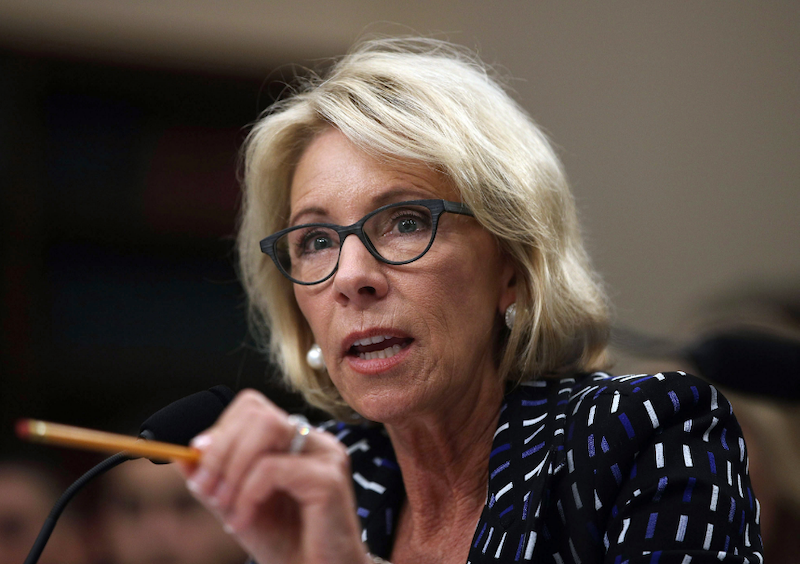 “Ending Title IX Guidance Isn't Just Evil—It's Profoundly Stupid.” This headline from Broadly, VICE’s feminist offshoot, epitomizes the over-the-top reaction from the left-wing media to Secretary of Education Betsy DeVos’ much anticipated speech last week when she announced she’d begin the process of revising the Title IX college campus sexual assault guidelines that Obama’s Education Department stipulated with its Dear Colleague letter in 2011. Calling DeVos evil and characterizing her decision as pro-rape, as some have done, is a cheap attempt to emotionalize the issue and obscure the relevant facts. Just business as usual for the politicized, polarizing media.

If journalists making DeVos (mother of four) out to be a rape-supporting shrew had to cover the controversy straight-up, they'd have a difficult time backing up their hyperbole. That's assuming they even understand the issue in all its complexity, which is a stretch. Instead, they resort to the modern-day tactic of ignoring inconvenient facts and opting for demagoguery. It’s effective at persuasion, because most people just want their biases confirmed, and it requires much less work.

Simply put, the way the Obama administration established its new interpretation of the Title IX legislation as regarding sexual assault was a prime example of government overreach and poor planning. Schools were threatened with withdrawal of crucial federal funding if they didn't institute the new rules, which were arrived at arbitrarily, on their campuses. The result was kangaroo courts administered by academics and college staff members wholly unprepared to investigate and adjudicate a possible felony. Many of them have felt overwhelmed at being expected to pass judgment on what happened during private sexual encounters which often took place under the influence of alcohol. Sometimes charges were brought months after the liaison had taken place. Most egregiously, the Dear Colleague letter set the burden of proof of guilt at “a preponderance of evidence,” which is essentially the same thing as flipping a coin to make a decision that will destroy a life. It also requires schools to conclude all proceedings swiftly, regardless of the timing of a pending criminal investigation.

Slate chose to cover the story from the angle that DeVos’ decision reflects the views of Donald Trump, who has a checkered personal history that probably includes numerous incidents that could be legally considered sexual assault. While it's true Trump has no particular interest in bringing justice to women who've been sexually assaulted, this is a red herring.

Had Hillary Clinton being elected, the Dear Colleague letter wouldn't look any better. The Slate article points out that DeVos invited some sketchy men’s rights groups to advise her on the Title IX policy, suggesting that this is particularly relevant, which it isn't. While it was a cosmetic mistake, one meeting has no more bearing on her decision than Trump being POTUS does. DeVos did receive hundreds of letters from students who claimed their lives had been wrongly ruined by campus kangaroo courts, a fact the Salon story, along with all the others from left-leaning media, conveniently omits.

Vox, which falsely represents itself as a neutral interpreter of facts, never offers the reader even the hint of a surprise in its coverage of knotty issues like this one. It didn't disappoint this time either. The lede to its story on DeVos’ speech was, “Her Title IX speech sent a message to survivors that they can't expect justice from the Trump administration,” as if there's not a legal system already in place, independent of Trump, to deal with sexual assaults. The questionable presumption that educational institutions are best equipped to adjudicate one particular crime leads to such false conclusions. The president is not responsible for directing how American universities police and prosecute sexual assaults on their campuses.

The Obama administration's Title IX interpretation requires schools that receive federal funds not to discriminate on the basis of sex but there's no mention of sexual assault in the original legislation passed in 1972. The Dear Colleague letter asserted that colleges not addressing sexual assault were guilty of discrimination, just as if they weren't allowing women equal opportunity to participate in sports. Ironically, what happened was that schools were forced to use a system biased toward finding an accused student guilty of sexual misconduct, which in itself constitutes discrimination.

DeVos stated that “a transparent notice-and-comment” process would be instituted, meaning that the Education Department will receive comments from the public intended to “incorporate the insights of all parties.” This is the standard legal process for federal agencies making binding legal rules, but it's one that Obama's Education Department skipped. You won't read about that in any of the left-wing coverage of the story. Just as Obama signed the DACA executive order that could be—and has been—nullified with a few pen strokes from the next president, his Education Department chose not to follow a legal process that would prevent the very same thing from happening. Perhaps Obama bears some responsibility for what ended up happening in both of these cases. The current Education Department is creating a new set of legal guidelines that can't be overturned by another letter. DeVos chose to be forthright by announcing her intentions in a speech, as opposed to just sending a letter it composed in a closed loop like the previous administration did. There's something to be said for that approach.