Loud and proud from Queens. 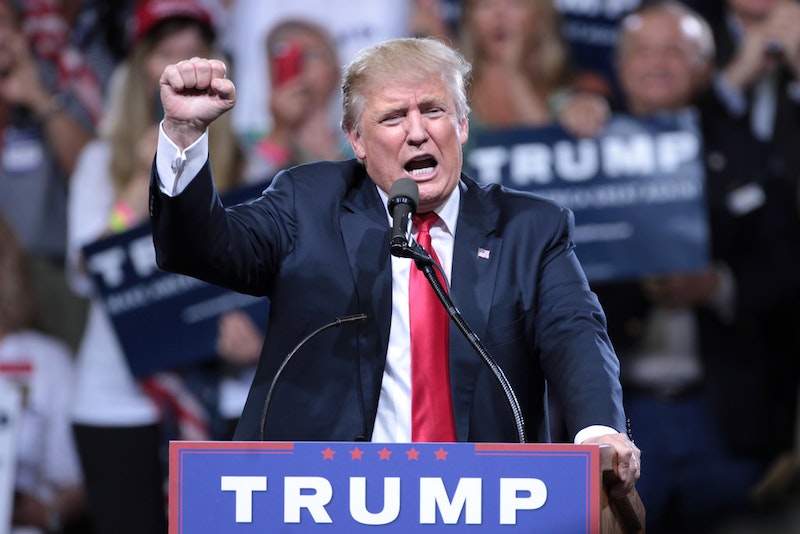 Sometimes I feel sympathy for Donald Trump. This isn’t something I bring up in polite conversation. And before any of you angrily close this page, understand that I don’t sympathize with his policies. I’ve been a “Never Trumper” since the mid-1980s, when he demolished Bonwit Teller to make way for Trump Tower, destroying Art Deco bas reliefs and grates he’d promised to preserve. But as a proud son of Queens (now living in L.A.), when I hear Trump speak, it sounds like home.

When Trump comes closest to sounding “presidential”—something he tends to do when talking to men in uniform: his Afghanistan announcement at Fort Myer, his speech to the American Legion—he echoes the wheedling voices I heard in my father’s law office on Queens Boulevard, down the block from Borough Hall; the angry Trump sounds just like Gloria, the old woman who lived in the ground floor apartment of the building where I grew up in Kew Gardens. She’d lean on her windowsill overlooking the courtyard, and yell, “Youse kids get off the grass. The grass has just been seeded, I tells ya. The grass has just been seeded.”

We also share a sense of Outerboro Resentment. When he started ranting about “the elites” during his Phoenix tantrum, “I went to better schools than they did, I was a better student than they were. I live in a bigger, more beautiful apartment,” he wasn’t so much “unpresidential” as non-presidential; nobody—not the founders, not Abe Lincoln, Franklin Roosevelt, or Richard Nixon—ever expected for the president to sound like someone thumbing their nose at the members of the co-op board who rejected them.

It’s something the media gets exactly wrong about Trump. He’s not from New York so much as Queens. In its profile on Breitbart’s Editor-in-Chief Alex Marlow, The New York Times Magazine included Trump and Marlow as examples of the “preponderance of today’s right-wing leaders who emerged in the toniest quarters of the nation’s bluest states.” It’s a list that included Andrew Breitbart and Steve Bannon (from Brentwood and Beverly Hills), while Marlow, Julia Hahn (a White House staffer known as “Bannon’s Bannon”), and Ben Shapiro, a Breitbart writer who quit when the site took the side of then-Trump Campaign Manager Corey Lewandowski over reporter Michele Fields and went on to start The Daily Wire, are all from Santa Monica and graduates of the elite Harvard-Westlake school.

This not only gets Los Angeles wrong (which is expected from the Times), but also New York. The Jamaica Estates of Trump’s youth is a different world entirely than Santa Monica or Brentwood. In Los Angeles terms, Trump would have come from Encino. An affluent neighborhood, to be sure, but the Valley.

Much like the San Fernando Valley and Los Angeles, Queens shares a municipal government with Manhattan, but is apart from it. Growing up in Queens, life feels like a compromise. You’re not quite the suburbs, but anyone from Manhattan (referred to by everyone in Queens as “the City”) thinks you’re from the sticks. This might’ve changed somewhat in the 20 years I’ve lived in LA, as the city’s locus of cool moved from downtown across the East River to Williamsburg, but here’s Rex Reed, a critic whose knowledge of the world is encased in the same midcentury amber as Trump’s, reviewing Good Time in the New York Observer: “The setting is the borough of Queens, an outpost on the New York horizon few Manhattan mainstream moviegoers have ever seen except through the windows of taxis on the way to the airport.” Some of my friends avoided the issue by setting their sights on Long Island, but my antennae were pointed to “the City.”

I don't have much of an accent—when people ask why, I tell them my parents had it removed with my tonsils and adenoids—but it didn’t make a difference. No matter what I wrote, whom I wrote for, or where I lived, I’d forever be marked as from Queens. My aunt and uncle might live on 5th Ave., but I’d be always be a visitor there.

(My younger brother, a television producer who moved out to Los Angeles some 20 years before me, uses his accent strategically, giving his sinuses a workout and moving his voicebox to the east, so that "butter" becomes "buh-duh" and "brother" becomes "bruh-duh,” when he's pissed, or wants to make a point, in much the same way that Obama or Hillary Clinton would drop the final r's and g's when they wanted to seem folksy.)

Being from Queens is worse in many people's eyes than being from out of state. Those people chose to come here; I might call Manhattan my home, but didn’t even have the sense to be from Manhattan. Queens lacked the charismatic earthy swagger of Brooklyn or the lost empire of the Bronx; we can't even rag on Staten Islanders, who really should be part of New Jersey, but have the Ferry. In the Safdie Brothers’ Good Time, Queens comes off as NY's Australia, a place where the brain-dead dregs of society have settled. Tom Wolfe, in  “Honks and Wonks,” his essay limning the granular differences in upper-class New York accents, Bayside, Queens stands in for all outré Boro speech. It’s “a certain desolate area of land,” in The Great Gatsby, a “valley of ashes,” overseen by the eyes of Dr. T.J. Eckleberg. In other words, the boro for New York’s lovable losers: Archie Bunker. The Nanny. Kevin James, lumpen and hangdog in King of Queens. The Mets. Peter Parker (but not Spider-Man, who slings his webs between Manhattan’s skyscrapers).

Trump is many things, but loveable is not one of them. But he makes no attempt to hide his accent. He is—to appropriate an expression—loud and proud from Queens. Even in a 1980 interview with Tom Brokaw, a surprisingly self-possessed Trump sounds like he took the F train to Rockefeller Center. The worst you could accuse him of is attempting to push his dropped r’s across Jamaica Bay and up the seaboard to Hyannis Port. But it’s recognizably outerboro, which didn’t hurt him on his initial Manhattan project, turning the decrepit Commodore Hotel into a gleaming Hyatt.

Sure, it looked like a block of Dallas dropped across the street from Grand Central, but even Ed Koch, who eventually had little good to say about him, complemented Trump, saying he “made a silk purse from a sow’s ear.” But the gaudy excess of Trump Tower, his near-constant appearances on Page Six of Rupert Murdoch’s downmarket Post, and bumptious credit-hogging over his Wollman Rink restoration, (which should’ve endeared him to everyone, but instead he jacked up the prices—including adding a fee to watch others skating—and acted like he had invented ice), and Graydon Carter and Kurt Andersen’s Spy indelibly painted him as a “short-fingered vulgarian.”

While his personality and taste may have gotten him blackballed from the toniest parts of New York, it hasn’t hurt him with the electorate. Whenever Trump sits down with a box of KFC, or orders a steak well-done (as my father would), the “elites” might shudder, but there are thousands of guys who have endured the scowls at their local steakhouse, cheering him on. He’s a rich man with plebian tastes. Someone who doesn’t know what fork to use, or how to pronounce foreign words. In other words, a guy from Queens.