Why Donald fell in love with Chuck and Nancy. 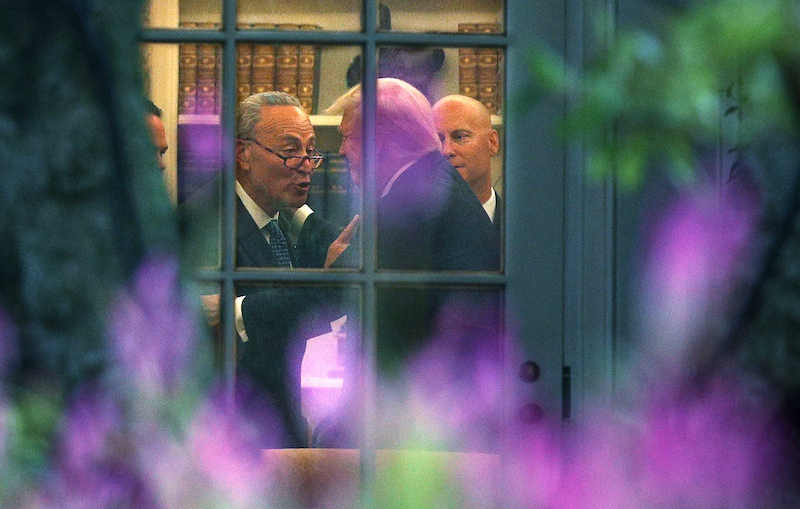 A tsar pulled something like Trump’s latest stunt. The old tsar died, and the new tsar admired Frederick the Great, so Russia went over to Frederick’s side and started fighting against the countries that had just been its allies. Now Trump has swung toward the Democrats and away from his own political party. In the tsar’s case (he was Peter III, one reads in Wikipedia), there was the pull of Frederick the Great’s star appeal. Frederick was making Prussia a great power, and the writing folk of Europe beat the drums about his military and administrative genius. Whereas Trump just flipped over Chuck Schumer and Nancy Pelosi.

He’s going to flip in a few other directions before his term is done. But he does have a few motives that stay with him from dodge to dodge. First, Trump wants to look at the TV and see himself win. The Republicans can’t give him any wins. Their agenda dissolves on contact with public opinion, as when they tried and failed to repeal Obamacare. Chuck and Nancy, by contrast, can make Trump a deal maker simply by accepting his yes when he agrees to their vote-scheduling demands. They want more than one vote on the debt limit ahead of next year’s congressional elections. This will mean embarrassment for Republican members of Congress, whose voters hate for them to raise the debt limit. But that’s a problem for congressmen and senators, and Trump is neither.

Second, Trump has investments, and anybody with investments can see the hit they take when Congress dithers about raising the debt limit. Now Trump and Schumer have a “gentlemen’s agreement” to see if they can repeal the limit and free the market from fear of U.S. default. Admittedly, the agreement has a shortage of gentlemen, but one sees a dollar motive for Trump to follow through.

Next, there’s the Ivanka factor. Apparently Trump likes to bring her into meetings, most often when he wants to get off a subject. He did so right after announcing his turnaround. “Republican leaders were visibly annoyed by Ivanka’s presence,” says somebody unnamed who was “briefed on the meeting,” according to The Atlantic. In The New York Times one reads, “Mr. McConnell, who is barely on speaking terms with the president, quietly seethed, according to two people familiar with the situation.”

The Ivanka drop-in took place just after Trump’s switch. For the Republican leadership her visit was a capper, the cherry on the sundae that has been their lousy Trump experience. The moment was “instantly iconic, and not in a good way,” the Times says, paraphrasing their feelings. To take Trump’s view, I bet he’s seen the Republicans make faces—or be “visibly annoyed”—on many other occasions when his little girl stepped into the room. Yes, Trump engineered the occasions to put the fellows off-balance, and he might reflect that their resentment had been of his own making. But he wouldn’t reflect that. He’d see the Republicans pulling faces. He’d notice the ordinary politeness of the Democratic leaders, who expected nothing from meeting with Trump and could wait out diversions without strain. A sentiment would form behind his brow, and eventually a storm would break on the Republicans.

The errant tsar, Peter III, was 34 when he did his flip. That’s old enough to know better, but being a flake at 71 is worse. How long are the Republican leaders stuck with their treacherous chief? Peter lasted six months before his wife cooperated with Russia’s powers-that-be to take him off the throne. Trump’s six months are up and he’s in overtime, but his wife isn’t ambitious. On the other hand, Mitch McConnell is quietly seething.