$600,000 in security expenses bought his right to free speech. 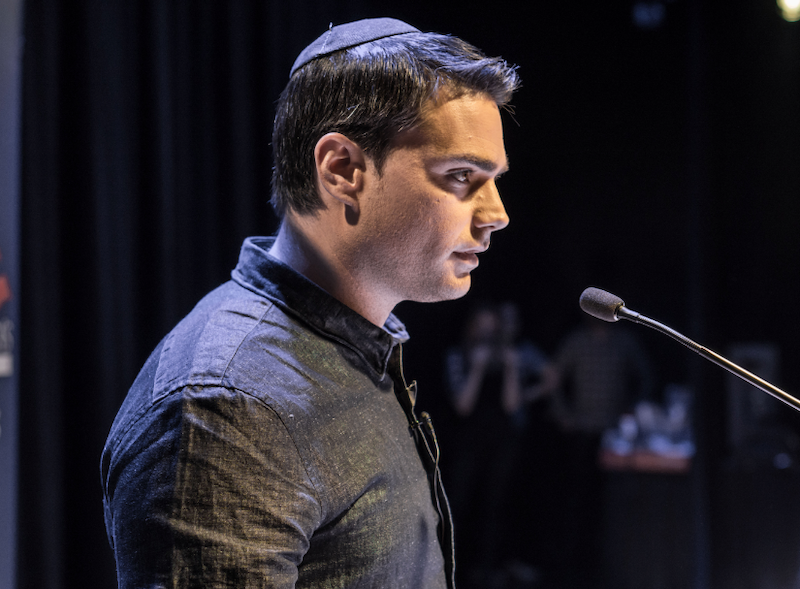 “Berkeley braces for right-wing talk show host Ben Shapiro's visit,” read the Los Angeles Times’ headline on September 11. Upon seeing it, one might wonder what mayhem the conservative flamethrower was planning for his upcoming speech at UC-Berkeley on the 14th, where school administrators were so concerned they offered counseling to students and faculty traumatized by his words.

The city of Berkeley announced it would shut down its main street for the event, Bank of America boarded up its windows, and concrete barriers were erected on the Berkeley campus. What the campus was really bracing for was left-wing violence in response to the editor-in-chief of The Daily Wire’s presence on the UC-Berkeley campus, but mainstream media like the Times didn’t like the way that sounds. They needed to remind us of who the bad guy is.

Antifa activists, hardly known for their sense of nuance, announced that Shapiro is a “white supremacist,” which he found strange since he's an Orthodox Jew who the Anti-Defamation League has named as the number one online recipient of anti-Semitic harassment. As the Times article stated, Berkeley was “girding itself for a visit from another polarizing political figure” by taking some extreme measures. The university administration decided there would be a “closed perimeter” around Zellerbach Hall, the venue for Shapiro’s speech, and an “increased and highly visible police presence.” Buildings near Zellerbach would be closed on Thursday, with scheduled classes moved to other buildings. Reacting to rumors that protesters would rip seats from the floor, school officials closed the Zellerbach’s balcony, although the proper response to such a threat would be to increase security. Capitulating in this way eliminated 1,000 spectators from the lecture.

Antifa activists, who apply the loaded “fascist” label without any precision, have a hard time discerning exactly why they're protesting certain events. They often turn out to bully harmless free speech rallies, as in Boston and San Francisco recently. A sign in Berkeley protesting Shapiro’s speech read, “The problem is fascist intellectual thuggery in service to the Trump/Pence fascist regime,” which makes little sense given that Shapiro didn't even vote for Trump. Shapiro finds Trump to be an objectionable man who lacks the character to hold the presidency, and has written that he despises Trump's “nastiness toward women and tacit appeals to racism.”

Shapiro regularly speaks out against racism on his podcast, completely avoiding the usual conservative dog whistling against blacks. He's for a strong military that will intervene whenever U.S. interests call for it, adamantly opposes abortion, champions the free market and free trade, opposes gay marriage for religious reasons, believes gender dysphoria is a mental illness, and feels that climate change is occurring but doesn't agree with all of the remedies the political left is proposing for it. In other words, he's a hardcore conservative. Apparently, that's all it takes to make a Berkeley student feel threatened or need counseling, without having even attended the speech.

Shapiro’s appearance puts UC-Berkeley’s reputation at stake. When Milo Yiannopoulos was invited to speak in February, there were protests with molotov cocktails detonated and people beaten and pepper-sprayed in the streets. Then Ann Coulter was invited, but she was forced to cancel too. The university, to its credit, hasn't given up though. It's named 2017 Free Speech Year, and has a number of other conservative speakers lined up in the coming months.

On the day of the event, “Free speech isn't hate speech” was chalked on the sidewalk in front of Zellerbach Hall. The campus was crawling with cops in riot gear several hours before Shapiro was to take the stage. A police helicopter was hovering over Zellerbach, a SWAT vehicle was spotted, and police officers stood perched atop buildings. A very long line of riot police took their places, prepared for the worst.

In the end, Shapiro gave his speech without incident, but the fact that this particular conservative speaker required such an extreme level of police presence is alarming to anyone who values the concept of free speech. Ironically, it’s sure to boost Shapiro’s profile on the right, which isn't surprising, given that the left often accomplishes exactly the opposite of what it intends to. Viewed from another angle, the $600,000 UC-Berkeley spent on security represents a strong commitment to preserving free speech, something that's been in question. Shapiro had a message to Antifa activists: “Go to hell, you pathetic, lying, stupid jackasses.” It's hard to argue with that sentiment, whether you like his politics or not.