Cozying up to Democrats another weird twist for this president. 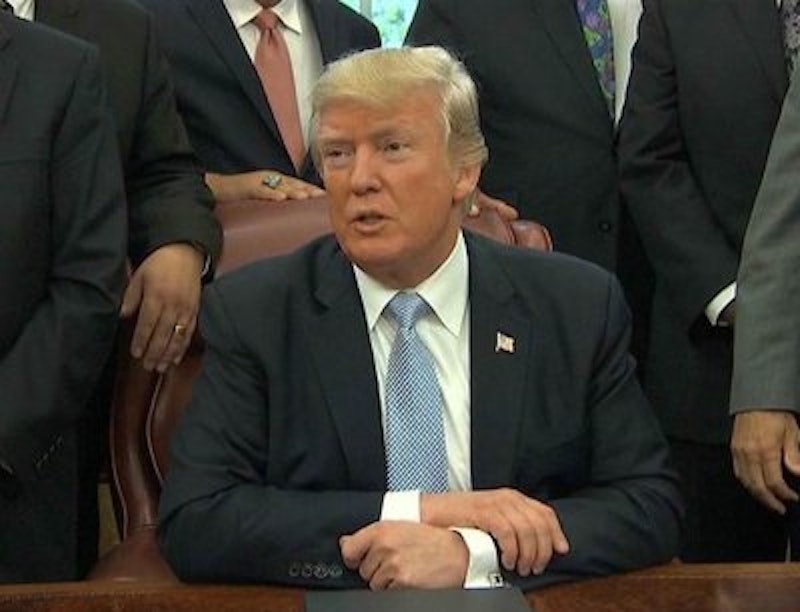 Which is it, Mr. President? Are Dreamers here to stay, or are they merely on call-waiting until the next whisperer bends your ear? Normally, and President Trump rarely accedes to normalcy, a deal is a deal when everybody walks away happy. And right now, the Republican party is in an unforgiving mood with its own president. He dealt them out behind their backs. And Democrats are rightly suspicious of their new best friend.

Dreamers to the left of him, his base to the right of him, Trump, seeking a narrow window of escape from a punishing decision, reverted to a familiar strategy on DACA—blame Congress. For an added measure of protective coloration, Trump bucked the weasel-word job of conveying the expulsive message to his toady at the Justice Department, Attorney General Jess Sessions, Trump’s xenophobic mentor on immigration and long-time foe of undocumented foreigners.

Then, House Minority Leader Nancy Pelosi, of California, the state with the largest number of dreamers, cornered Trump and extracted a favor. Trump tweeted in return: “For all of those (DACA) that are concerned about your status during the 6 month [sic] period, you have nothing to worry about – No Action!”

Pelosi said at a later news conference: “This is what I asked the president to do and boom, boom, boom, the tweet appeared.” The tweet of Pelosi’s reference followed Trump’s abandoning of Republicans in favor of a deal with Democrats that sent blindsided GOP leaders reeling after months of delicate negotiations on their own plan. Trump agreed with Democrats to tie extending the debt ceiling to December with Hurricane Harvey aid. House Republicans had wanted an 18-month extension and separate legislative action on the debt limit and Harvey aid to assuage conservatives.

Even more of a slap, Trump and Democratic leaders agreed to try and eliminate altogether the need for periodic raising of the debt ceiling by Congress. The tie-in embraced by Trump and Democrats whizzed through Congress with $15 billion in aid for Harvey victims. Trump promptly signed the bill—finally, a long-sought legislative victory. (There are 44,000 DACA participants in Houston alone. It’s estimated that 40 percent of Texas flood victims are undocumented immigrants and 85 percent do not have federal flood insurance. Four Texas Republicans voted against hurricane relief.)

Elimination of the debt ceiling lift is another example of the old reverse English for Trump and a break from Republican orthodoxy. As a candidate, and Republican, Trump always favored raising the debt ceiling as a weapon for a corresponding decrease in government spending, even at the risk of shutting down government. Now, in another major reversal, he wants to do away with the reoccurring exercise in who-blinks-first altogether.

As for the Dreamers, the Trump gambit is a legitimate public relations device. Known for what it is, it’s called ducking the issue and deflecting responsibility. It works like this: When the news is good, the principal makes the announcement; when the news is bad, pick a handy and willing fall guy to take the hit. Trump, over the years, has had more positions than the Kama Sutra on immigration and the Deferred Action for Childhood Arrivals (DACA).

Niccolo Machiavelli, the 15th-century Italian courtier and the world’s first political consultant, counsels his prince to “Beware of abrupt changes in character lest the populace become suspicious.”

The Trump Administration began its cleansing operation with terrible swift force. It circulated a talking points memo, obtained (or leaked) by the media that forewarned DACA participants “to prepare for and arrange their departure from the United States.” That stern warning plays against the six-month grace period contained in Trump’s repudiation of President Obama’s executive order creating DACA.

The delay is baloney. Congress tried for a dozen years to modernize the immigration laws and couldn’t get the job done. That failure is the reason Obama issued the DACA order five years ago. And now, voters are expected to believe that Congress can accomplish the task in six months. No need. Trump seemed to walk away from his harsh manifesto (at least temporarily.)

All of which raises the question—which has been raised many times before: is Trump really the dealmaker he claims to be, or is he simply a frenetic blusterer who leaves the heavy lifting to others. There are about 800,000 Dreamers who’d like an answer sooner rather than later. And Democrats had best proceed with care and caution before they believe that a tweet has sealed the deal. Republicans now know better.

The key to deal-making is consensus building, and Trump is no slave to bringing people together. Trump’s bona fides as a wheeler-dealer hark back to his earlier days as one who prowled New York for real estate deals and later expanded his franchise to national and international markets—all on a hunch and a bequest from his father. He’s had some lavish successes and as many notable failures—the bankruptcies and losses of Eastern Airlines, the Plaza Hotel in New York and several casinos, to name a few. He finally made his mark and his notoriety as a reality show host and a branding name. And you can bet that throughout the successes he was surrounded by teams of lawyers and MBAs who made the calls and closed the deals for which Trump got the credit and, along with it, his cachet as a dealmaker.

What Trump is offering is not a new-found pragmatism, or a re-born style of governance. It’s simply the latest whim from an amateur who’s still feeling his way and likely will never find it. Trump is often in error but never in doubt, a man not to be trusted either in word, deed or tweet.

No matter which way, Trump still has the final word about the destiny of Dreamers. If they’re here to stay, as Trump seemed to imply, he first must call off his immigrant-hunters from ICE and Homeland Security. And if Congress finally does act to preserve their stay within the prescribed six months, it must be Trump’s signature on the legislation that makes it official. The worry is that his base—if he still has a base left after his erratic acts of betrayal—might pressure him into resisting. Also at risk in the 2018 elections is control of the House. Three more moderate Republicans have chosen not to run, further exposing the GOP to historic bye-year rejection.

The four states with the largest concentrations of dreamers are California, New York, Texas and Illinois. In Maryland, though there are about 24,000 persons eligible to participate, there are an estimated 10,000-11,000 persons enrolled in DACA, the Obama-era program that shields them from deportation because they were brought to America as children by undocumented parents. DACA enrollees must meet stringent requirements on education, employment, taxes and can have no serious crimes on their records. And they must re-enroll every two years.

To add to the pressure and counter-pressure on DACA, the attorneys general of 15 states and the District of Columbia have filed suit in federal court in New York to save DACA from Trump’s cruel decision and Sessions’ contemptible act.

The contradictions of Trump’s feelings and actions on immigrants are compounded by statements he made at a news conference earlier this year about eliminating DACA: “We’re going to show great heart. DACA is a very, very difficult subject for me… You have these incredible kids, in many cases… They were brought here… We’re going to deal with DACA with heart… because you know, I love these kids. I love kids! I have kids and grandkids.”

Truth be told, the closest we are to consensus in America today—except for the troglodytes who fan Trump’s ego—is that DACA enrollees should stay in the only country they really know. So, Mr. President, the question lingers: Which is it? Do they go, or do they stay? You can’t have it both ways.