Betsy DeVos Is Up to Something Good

Obama administration's guidelines for Title IX need to be changed. 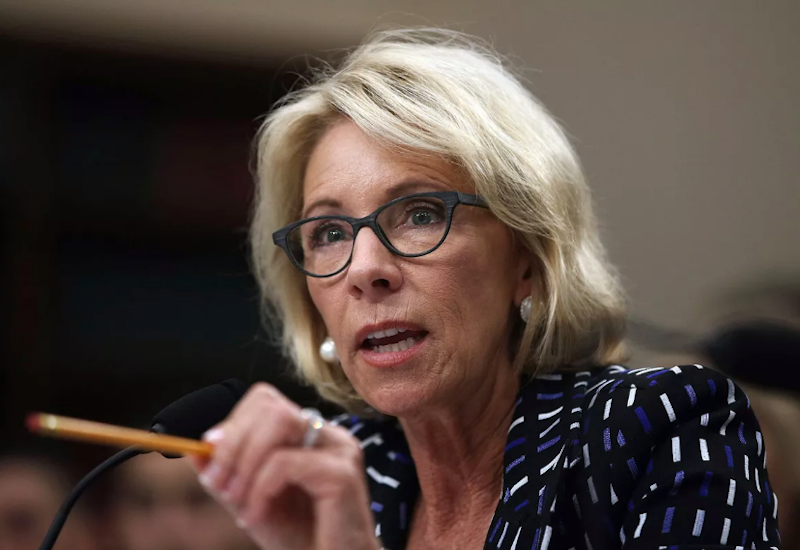 A feminist professor writes an essay arguing that the new campus codes banning professor-student dating infantilizes students, who should be free to make their own choices. A group of infantilized students then marches to the president’s office with a petition against her, and two of them file Title IX complaints against her because, they claim, she created a hostile environment on campus with her ideas. Those old enough to remember when Congress passed the Title IX legislation back in 1972 might find this scenario puzzling. Perhaps they're asking themselves what this has to do with providing equal opportunity for women on American college campuses, which was the original intent of the law.

The Title IX Educational Amendment Act was drawn up to ensure campus equality for women in athletics, career training and education, employment, STEM education, standardized testing, and technology. A quick look at the history of the legislation demonstrates that the main impact of the law has been centered around women's sports. It's the main reason the U.S. soccer team competes at such a high level today. Now it's used in an attempt to censor what professors can write, as Prof. Laura Kipnis of Northwestern University discovered when The Chronicle Review published her essay.

Title IX’s also used to require American colleges and universities to investigate and adjudicate charges of sexual assault on campus in a manner that's slanted towards the accuser. One might wonder what this has to do with equal opportunity too, but these things are happening because of the new guidelines on Title IX compliance that the Obama administration required institutions of postsecondary schools to follow if they want to continue receiving federal funds.

Secretary of Education Betsy DeVos is taking a strong stand on this issue. She’s reevaluating the fairness of Title IX’s updated interpretation after receiving hundreds of letters from students accused of sexual assault, branding them as “rapists” for life. The Obama administration gave little thought to the possibility that so many men would be falsely accused and judged guilty of sexual assault because of its new directives. It didn't think they deserved the legal protection all other Americans have a right to when accused of a serious crime, decreeing that the burden of proof for a guilty verdict handed down by college tribunals would be merely a “preponderance of evidence,” which isn’t much different from a coin flip. All it takes to wreck a young life, often to the point of suicidal thoughts, is 50.1 percent of the “evidence,” collected by non-law enforcement people, stacking up against the accused. It's hard to find another example of institutionalized inequity in this country that runs so counter to basic American principles.

In her Teen Vogue column, feminist Lauren Duca writes, ”At every turn, Betsy DeVos has refused to commit to enforcing Title IX.” This is deceptive, because the Secretary of Education is only wavering on committing to enforcing the law as it's being applied to cases of sexual assault, which was never the intent of the original law. DeVos has expressed no distaste for Title IX in general.

Candice Jackson, acting head of the Education Department's Office for Civil Rights, told The New York Times that in many of the campus sexual assault cases there's “not even an accusation that students overrode the will of a young woman. Rather, the accusations—90 percent of them—fall into the category of, 'We were both drunk, we broke up, and six months later I found myself under a Title IX investigation because she just decided that our last sleeping together was not quite right.'"

While it wasn’t appropriate to set the figure so high without supporting data, Jackson brought to light a secret that campus feminists and their allies would prefer not be discussed. Duca, in her Teen Vogue article, states that the highest estimated rate of false accusations of rape is only eight percent. While that statistic applies to cases of forcible rape where the perpetrator and victim aren’t acquainted, it doesn’t apply to the drunken hookups that Candice Jackson is referring to. Many campus sexual assault charges have been filed months after the alleged incident. Sometimes there have been friendly, post-incident texts exchanged between the two parties involved, including the high-profile case of Columbia University's “mattress girl (Emma Sulkowicz) who texted fellow student Paul Nungesser that she “yearned” for him after the day of his alleged assault on her. There's no way that even close to 92 percent of the men judged guilty by campus Title IX tribunals, composed of left-leaning professors and administrators politically predisposed to favor the accuser, are actually guilty of any crime.

The Washington Post reported that, since 2011, “more than 150 lawsuits have been filed against colleges and universities involving claims of due-process violations during the course of Title IX investigations and proceedings related to sex-assault allegations… In the two decades before that year, only 15 such lawsuits were filed against universities.” The Obama administration’s Department of Education submitted its Title IX sexual assault guidelines in 2011, with its Dear Colleague letter, a clear-cut case of the federal government bullying, given how badly the colleges need its cash handouts. How does an academic institution, which is neither a law enforcement nor a judicial entity, provide women equality by incompetently investigating and adjudicating sexual assault cases? Perhaps there's something amiss when giving rights to one group requires depriving them from another group.

There's plenty of coverage of the damage the new interpretation of Title IX has been causing, if you know where to look for it. The MSM avoids it, as it doesn't fit their narrative. The most egregious case lately is that of USC football player Matt Boermeester, who was recently kicked out of USC after a neighbor saw him roughhousing with his girlfriend, Zoe Katz, outside of his apartment. The neighbor told his roommate about it, who then told the USC football coach. When Katz was summoned to a Title IX hearing, she said the two were just playing around. A school official told her that she must be afraid of Boermeester, which she denied. Katz said that she has “never been abused, assaulted or otherwise mistreated by her boyfriend,” and that the Title IX office made her, the “victim,” feel “misled, harassed, threatened and discriminated against.”

USC expelled Boermeester, and Katz has now hired a lawyer to help clear his name. “Matt Boermeester did nothing improper against me, ever,” Katz said. “I would not stand for it. Nor will I stand for watching him be maligned and lied about.” The neighbor who saw the alleged abuse didn't call the police. He didn't go outside to intervene either. He simply told his roommate about what he thought he'd seen. That was enough to seriously mess up the life and reputation of someone who never got a chance to defend himself. Betsy Devos may or may not be qualified to serve as Education Secretary, but if she can put an end to travesties like this, stop kangaroo courts from ruining young people’s lives with sketchy evidence, and make sure college professors aren't censored to provide safe spaces, she’ll have accomplished something significant.