The Penis Takes a Walk 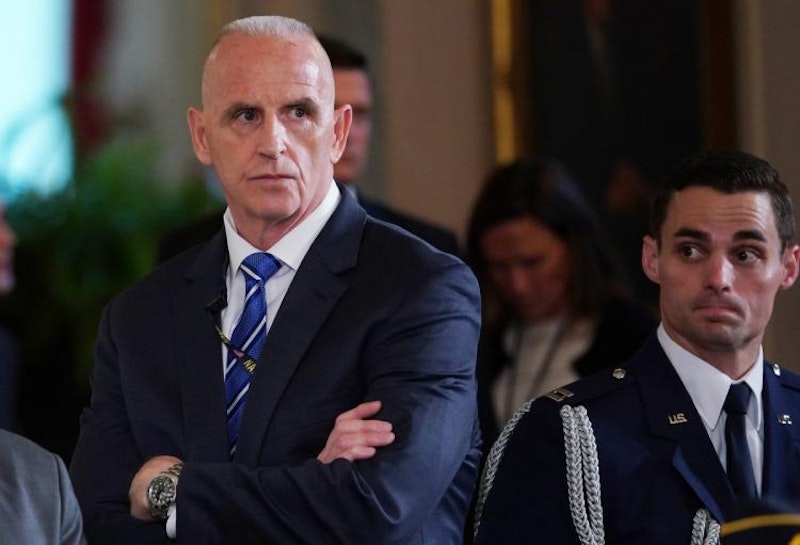 Bloomberg gives the lowdown on why Donald Trump’s favorite guy has decided to take off. The problem is Iron Mike Kelly, the hard man who’s now chief of staff. “Schiller has told friends that working under Kelly is very different, and that he doesn’t like the job as much,” Bloomberg tells us. “He has said he believes that Kelly doesn’t like Trump personally and is serving as chief of staff predominantly out of a sense of duty to country… That has been deeply demoralizing for Schiller, who is accustomed to Trump being surrounded by devoted employees, two people said.”

I wonder if the people at Bloomberg fine-tuned that language to get in a dig. Seeing duty to country demoralizes him—good lord. Not only that, but he’s “deeply” demoralized. The headline tells us that Trump’s allies are “rattled,” and the second paragraph quotes a Trump intimate as saying the big man is “crushed.” And what of the fallout? “Two people close to Trump said they worry that Schiller’s departure will leave the president and the West Wing off-balance, given the deep relationship the two men share,” Bloomberg warns.

Feelings count around here. “Multiple people interviewed described Schiller as an emotional anchor for the president in a White House often marked by turmoil,” Bloomberg says. For “emotional anchor,” you or I might say “security blanket.” By the account given, Schiller’s on staff to keep Trump’s morale pointing up. If he can’t buddy with Trump, there’s not much point to having him: “Schiller lost his privilege to walk into the Oval Office at any time when Kelly took over. And he now views his job as somewhat redundant, people close to him said. The president has Secret Service to protect him, valets to fetch what he needs, aides to dial his phone—people to handle every facet of Oval Office operations.”

Schiller’s title is director of Oval Office operations. A CNN profile tells us he started as a New York City cop. “I was the rammer,” he says, recalling how he busted up drug houses. Schiller got a job as bodyguard to Trump, eventually moving up to chief bodyguard. He’s six feet, four inches, and weighs 210 pounds, and he spent almost 20 years moving people around for Donald Trump. “He would go with Trump to dinners, fashion shows and baseball games—always restricting who got close to the boisterous businessman,” CNN says. After Trump became a candidate, Schiller dragged Jorge Ramos out of a news conference and punched a demonstrator in the face. After Trump became president, he sent Schiller to FBI headquarters with the letter that terminated James Comey. A couple of weeks ago, when the Phoenix rally proved thin, Trump sent Schiller to fire the rally’s organizer. Not unexpectedly, Trump’s security blanket is a large, phallus-shaped thing that he uses to swat people.

Now Trump’s dick is going to leave because there isn’t enough love on hand (so to speak). The Rammer just doesn’t like the job as much. I’ve encountered men who gave reasons like that, and their voices always rose when they did so. The idea was that we were breaking through to true feelings, the underbed that makes each of us who we are, and that this state could be represented by the voice of naivete. I hope the Rammer doesn’t talk like that. But he’s been saying the same sort of thing.

This isn’t a surprise so much as a confirmation. Trump, the soppy tough guy, has a similar type around him. Psychologically, they can’t thrive without a warm bath of love for Donald Trump, and that love has been drying up: the chief of staff gives none, the crowds are kind of a fizzle. Trump demonstrates signs of adoration withdrawal, a condition that features punishment of people he’s recently seen. Perhaps Schiller registered that the man he fired after the Phoenix rally had organized all of Trump’s rallies going back to when Trump started having them. If so, the Rammer was being messed with at the center of his dog brain. Results: the going is tough and the tough guy is going.