Politico Lies to Itself and Everyone Else

Digging in after the Carson fiasco. 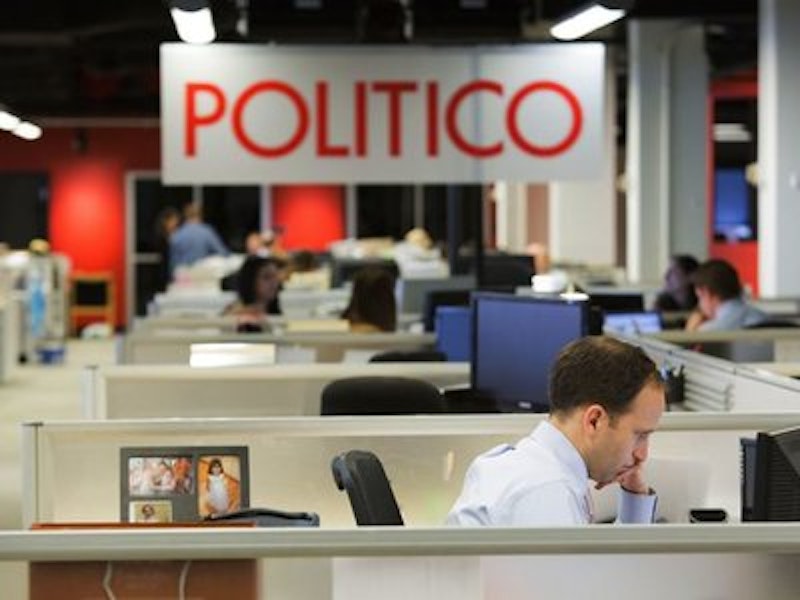 Politico is telling itself a story. Look at this quote from its Nov. 13 article about Ben Carson and Donald Trump. “The retired neurosurgeon is trying to show more discipline, a week after losing his cool during a press conference,” the site says. It claims that Carson is “eager to right his campaign,” the reason being a recent “barrage of criticism.” These assertions are lobbed into the piece. There's nothing to support them, you're just supposed to wave them on.

Because Carson is so eager to right his campaign, the site says, he is laying back in the face of Trump's attacks and “refusing to fan Trump’s flames.” But the article gives no evidence that Carson's campaign needs help. In fact the article notes that the doctor has been “eclipsing Trump in some state and national polls.” Nor does Carson's present behavior differ from his pre-barrage behavior. He has always waved off Trump's noise and paid him a decent minimum of attention. Many intelligent people would do that when faced with Trump. Well, Carson's one of them. The guy doesn't have a low opinion of himself. He looks at Trump from beneath those half-raised lids and sees a man trying to do surgery with a butter knife. Carson figures the fool will soon disappear from his path.

All right, that's my opinion. I don't try to pass it off as a simple fleshing in of background for a news story. Politico, on the other hand... That shabby operation is pretending it was Carson that suffered a hit the fateful day of Nov. 6. On that day, at 11:29 a.m., Politico posted a lead article headlined “Carson Admits Fabricating West Point Scholarship.” By nightfall the headline was dead, replaced at 5:32 p.m. by “Exclusive: Carson Claimed West Point 'Scholarship' But Never Applied.” It had been a harsh few hours. People, led by an extremely vocal Carson campaign, had noted that the dictionary in no way supported the headline's use of “fabricating.” A fabrication is put together to deceive; the campaign statement on which Politico's claim was based said nothing about the doctor's frame of mind, let alone saying he had wanted to deceive. Anybody who read the two paragraphs could see they listed events—the operative version of the doctor's youthful encounter with West Point—and left it at that.

A reporter might ask the campaign why this version didn't match the one the doctor had always given. But Politico didn't. It didn't look at a dictionary either. Politico shat the story out and splattered it across the top of everybody's screens, and pretty soon everyone but Politico's editors began to notice the smell. Now we're supposed to believe Carson is on the defensive, exhibit A being his “losing his cool.” From what I saw of the doctor's press conference, he was like a deeply ticked authority figure who was going to stamp out some nonsense. I think Republican voters will be just fine with that. They knew he was a spiritual guy, but now he's a fighter—great.

Again, my opinion, but Politico gives no reasons against it. To accept Politico's line, you'd have to believe that Carson got so out of hand that he was a spectacle. I bet he didn't and wasn't, and that's why you don't see memes or clips mining the alleged incident. Ben Carson may have been all wrong in that news conference, and he's deep into wingnut lore, but he didn't do anything that needs living down.

Instead Politico has to live down Nov. 6, and its solution is to act like the other guy farted. Hype is one of Politico's bad habits. The writing there is crummy, and the site tries to pound stories into being more interesting than they are. If there's shouting during a conference call, Politico will say the call “spiraled into chaos,” even if the call proceeded as planned. (The shouting was by Republican operatives unhappy about some debate rules, and the call was to collect their opinions about the rules.) But this time Politico has upped its shoddiness by half a dozen levels. As far as I can tell, it now shoves pro-site propaganda into its copy.