The Defense Budget Is a Threat

Out of control defense spending makes us less safe. 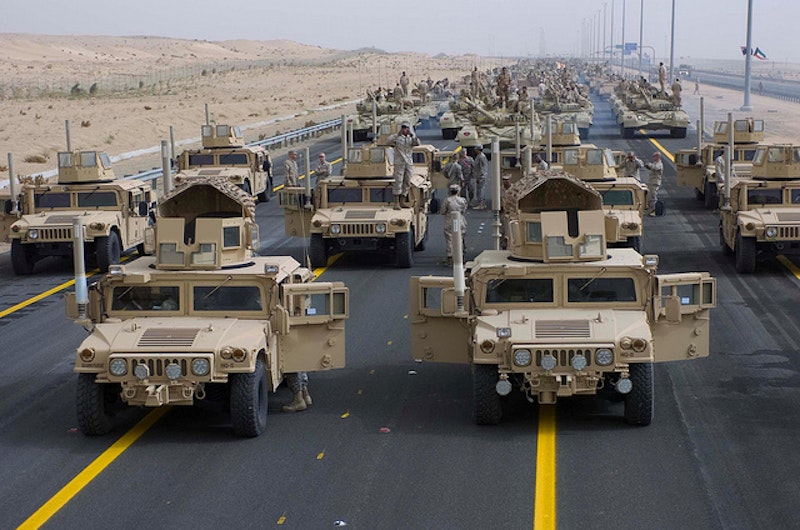 "The world is a very dangerous place," Martin O'Malley declared at the Democratic debate over the weekend in Iowa. Hillary Clinton pointed to the threats the US faces, like Russian "plans for a drone submarine that could carry a tactical nuclear weapon." Bernie Sanders argued, "We need major reform in the military making it more cost effective but also focusing on the real crisis that faces us."

All the Democratic candidates are agreed. The US faces serious threats, and it has to be smarter and tougher to face them.

And all the Democratic candidates are wrong. The world is not "a very dangerous place." At least, it's not dangerous by any reasonable historical measure. Currently, the United States is more secure—exponentially more secure—than it's ever been.

That's a controversial thing to say after the terrible violence in Paris last week—or after the 9/11 tragedy of 14 years ago. Terrorist attacks are traumatic, shocking, and deadly. Governments want to do everything they can to prevent them, and protect their citizens.

America, and other Western nations, are not invulnerable; they still face security threats. But it's simply false to say that those threats are historically large or dangerous.

The United States at the moment has, by far, the world's largest military. On our borders, we have strong allies. The idea that any other nation could realistically invade us is absurd. In truth, there’s no nation that even vaguely pretends to challenge US military dominance anywhere near our own shores. In World War I, World War II, and the Cold War, America faced enemies who could, at least to some degree, be said to present a threat to our country. There’s no such threat now. Not in Afghanistan. Not in Russian drone submarines. Not from international terrorism. We aren't invulnerable, because invulnerability is impossible. But Americans have less reason to be afraid now than at any time in our country's history.

And yet, our military budget remains at levels that suggest that we are in constant danger of all-out war. We spend around $600 billion on the military. That's more than the next seven countries combined. And most of those countries, including Germany, India, the UK, France, and Saudi Arabia, are our allies. If we cut our military budget in half, to $300 billion, we'd still be spending more than the $210 billion that China and Russia spend combined.

What could we do with that additional $300 billion? We could invest in infrastructure. We could bail out flailing state governments, and address the catastrophic drain in public sector employment and services. We could improve the social safety net, which would help stabilize the economy when recessions hit. Which is more of a threat to the US at the moment: long term economic stagnation or military invasion? That's not a hard question to answer. But we spend money as if the answer is the second, even though anyone who's not an idiot knows that it's the first.

In addition, spending less on the military would make us less able and less interested in fighting wars. Currently, the US stance towards the world is that if something goes wrong anywhere, it threatens us, and we should drop bombs. Libya, Syria, Afghanistan; these nations are not going to invade the United States. We make ourselves a global target by interfering in conflicts where we have no national interests. A smaller defense budget would mean fewer US wars, fewer US soldiers in harm’s way, and fewer people killed by US troops. Massive expenditures on weapons creates an incentive to use all those exploding toys. If you want fewer wars, build fewer bombs.

The world is never going to be perfectly, completely safe. But overstating the dangers doesn't make us more secure. In many cases, it can do the opposite. The Republicans are mostly a lost cause on this issue, Rand Paul notwithstanding. But it’s past time that the Democrats acknowledged that our massive military budget is not too small, but too large, to protect us.