All likely responses to terror are wrong. 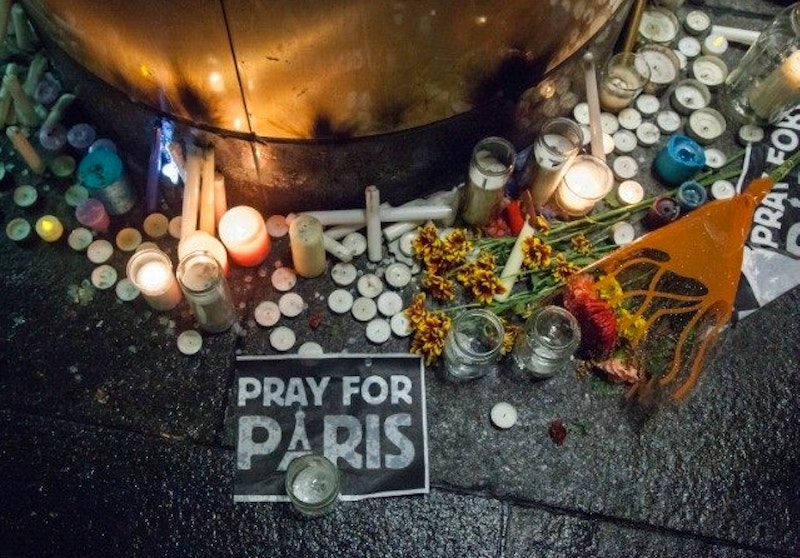 I wish it were possible, especially after events like the Beirut and Paris terror attacks, to calculate what meager percentage of human effort is productive. That is, what’s really left over—even at the best of times—when you eliminate the violent, the irrational, the pointless, the satisfying but short-sighted, and so on? I’m guessing it‘s not much. The expressions of solidarity—throughout the world, not just in the West—are good but fleeting. Much as I hate to be a naysayer, the concrete actions, from all political and philosophical factions, will be ones I suspect are counterproductive.

The religious will pray and long for a more spiritual world, though a secular one might at this stage be more peaceful. The admirably angered and courageous will want more war, though it’s war in the Muslim world (and simultaneously the unnecessary drug war against Latin America) that causes the refugee crisis and occasional terrorist reprisals. Western intelligence and military services will funnel arms—and often immense piles of cash—to the wrong people overseas, encouraging bolder terrorism, rationalizing that it at least makes life harder for Assad or some newer enemy (radicals now being preferred to authoritarian leaders in the way that authoritarians were once preferred to totalitarians by U.S. policymakers—progress?).

Naïve leftists will pretend that sheer tolerance, as if by telekinesis, will make the bad people stop doing bad things to us. Right-wingers will want borders closed (whether in Hungary or Michigan), which is certainly understandable, and if they merely wanted more thorough screening for criminals and terrorists, I might applaud the move. Yet Muslim (and/or Mexican) migrants are still but a tiny fraction of the violence that goes on within Western/Northern societies, and non-terrorists from other parts of the world have as much right to flee war zones as we do, and should hardly be declared monsters for hoping to find food, TV, and jobs when they reach safer shores. Sounds pretty normal, actually.

On the other hand, in the places that do welcome migrants, they may well go years without learning to integrate into society, as welfare-state left-liberals with no grasp of economics try to shovel welfare money toward detention centers and free housing that slowly ferment into angry, immense ghettoes (supported by rightly resentful taxpayers, who also funded those unnecessary wars creating the migrant crises in the first place). That‘s the sort of dynamic that makes France a dangerous and divided society.

Few in positions of power think of solutions that involve anything other than a further exercise of power—more spending, more surveillance, more bombing, more free housing, in some incoherent combo—though casual commerce tends to soothe people more effectively and far more cheaply in the long run.

The elite won’t leave bad enough alone, and so on top of all our current migrant-related woes, it’d be wise to anticipate an array of horrible new responses from the media, Saudis, the decadent UK elite, jihadists, slow-to-act cops, overly-hasty cops, separatist groups, detached intellectuals, idiot populists, Mexican cartels, CIA, clerics, street gangs, left-wing activists, defense contractors, academia, the Vatican, the UN, China, and so many other noxious, power-worshipping, manipulative, peace-derailing groups that I sometimes have trouble remembering which small remainder of the human race I still side with.

Eagles of Death Metal and their fans, at the very least, still have my sympathy. I wish I were more confident their future would be less frightening than their recent past.