ISIS: As Advertised on CNN 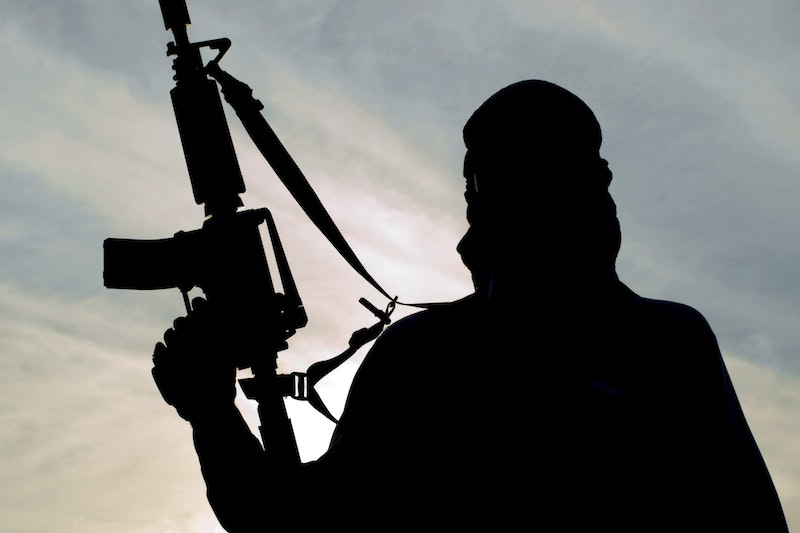 During the shootings in Paris, everyone in the room was watching one TV. “Well, you know, it tells people in the Quran that it's okay to kill people,” I overheard someone say. I’m not a scholar of the Quran, nor am I Muslim, but I knew this wasn't true. “Are you Muslim?” I asked. She said she was not. She was a non-practicing Catholic. “You remember the Old Testament?” I asked. They told me that outside of some vague scary images and language they were at a loss. “That was written in a different time,” I said.

I am in no way interested in a theological or statistical argument about the percentage of violence in one religious document versus another. They are historical documents, and statistics are as arbitrary as the moment in history in which they were determined. This gets back to my original quip, “That was written in a different time.”

As the CNN ticker scrolled by, I kept talking. “You know some people just want power and they will use any symbol to prop that power up. Look, I know what you're thinking,” I said with a half smile.

ISIS is so sensational that if they had their own cable news channel they would rival the big American news networks for viewership. The thought seems ludicrous, I know. Who would watch that sort of thing? What's their angle anyway? I believe that their angle is a politics of power, with the door leading to it propped open by an ancient religious book because it was conveniently the thickest door stop on hand. The thing about power is that you can't just go out to and say, “Hey, I want power.” It is far wiser to go the roundabout way and appeal by way of the lowest common denominator. Everyone has a religion. Even atheists, in that peculiar logic of the negative, are forced to reckon with the religion of their a-religion. "Hey, I want power,” roughly transforms into the following exchange:

ISIS: “Hey, you know that guy over their with the cowboy hat?”

Random Dude: “What about him?”

ISIS: “He said something about your brother.”

Random Dude: “I don't even know him.”

Random Dude: “You sure?”

Random Dude: “Do you think I can take them?”

ISIS: “I think you're chances are better if we take them together.”

This is a conversation that has played out throughout history, even before there were cowboy hats. In the case of ISIS, it's a bit late for a fundamentalist group to extract the extreme parts of an ancient religious text and say they work in their original context. De-contextualization here is necessary, allowing the definition of enemies or targets to become infinitely broad and elastic. ISIS claims that infidels or the West is in the midst of receiving a comeuppance, but they never say who precisely has to answer. Is it the current or former U.S. President? Is it doctors in a clinic in Spain? Is it teenagers in a Parisian music club wearing leather jackets and swearing in English? The enemy is whoever ISIS needs them to be at the time. They are a moving target subject to change.

The politics amounts to the obscene way that every time civilians die, politicians in the West have to respond emphatically, thus coming one step closer to fulfilling the belief that they are always scary and rhetorically dancing with blasphemy. This is a feedback loop that increases recruits and increases the response to those recruits.

The question of where the beginning of a feedback loop starts isn't always evident. Obviously there was a time before ISIS. In doing some research on YouTube I found a time in Fox News' archives within the last ten years when there was not a red-faced man screaming about the “situation” in the Middle East, without referring to ISIS.

They're a DIY revolutionary group seeing how big they can get. Advertisers would say that ISIS is a very effective brand. As Edward Bernays knew, a brand was doing good business only so long as it could still convince the consumer that they should buy something they essentially don't need.

What you need in 609 CE is not the same as what you need in 2015 CE. This is true because the context is different. Men with swords on horses (or Popes with swords on horses, as would come shortly later) would be a strange sight today. The world in a way is much less flamboyantly epic than it used to be. It is also less demanding of martyrdom. Anytime that a new religion was formed, someone had to die in some radical way. But Muslims today seemed pretty well established and organized. The self-styled leaders who are calling for some radical moment are both in the minority and selfishly attempting to dial back the clock to a time in which their particular zeal for power and disciples had more capital.

For now, CNN still flickers on. I alone am left to watch it. It's doing its best to convince me that there is some watershed moment looming for the U.S. and France; that they together can combat the scourge of ISIS. Somewhere in a bar down the street, there is someone talking to their bartender about how some religious groups are just trouble. Somewhere in a hotter climate a young man, alone somewhere, wearing leather boots, is using his Blackberry to tweet something that the other two parties may read in his attempt to replace the feedback loop of politics with the Mobius strip of religion.