A philosophy professor grapples with how remote he ought to be. 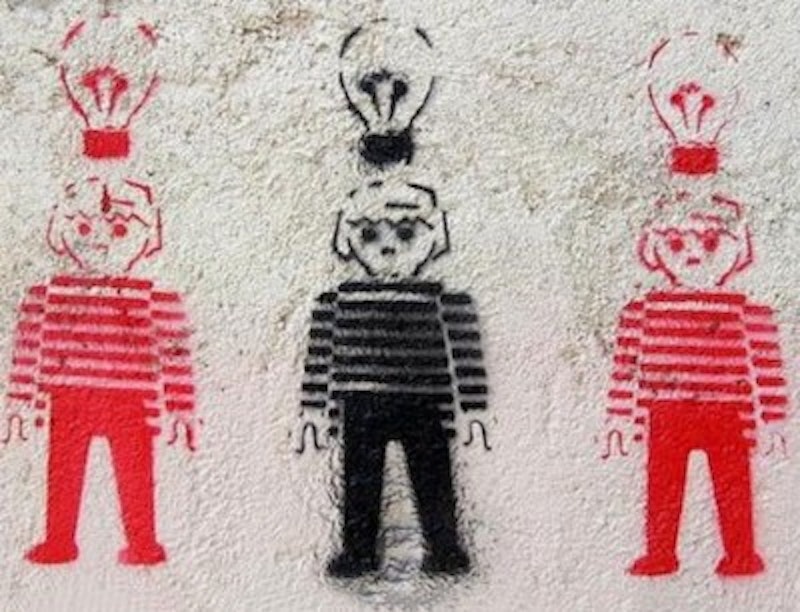 A fundamental question, conducting a human life, is "How much distance?" How far away should I be, in my head, from politics, or from the war in Syria, or from you, for example? "The earth is in a death spiral," wrote George Monbiot in The Guardian recently, yet again. There are many reactions one might have about this, such as "Oh no! How can I help save the planet?" Or one might go on a hunger strike or put one's body in front of a coal train or contact one's representative. Or one might, as I’d do under such circumstances, think about what one could say about the earth's death spiral, how to use it to make a point or show one's cleverness, and so on. And the question is, in this and so many other circumstances: how far away should I try to get, or be? It's a question about what morality demands of us emotionally. Should I sob? Should I analyze? Should I get so far away from the unfolding disaster or crisis that I start snickering as people suffer?

This is a fundamental dimension of human experience, and it’s too little explored. The question arises over and over, as news accretes into history. But it arises too on the job, in the family, at the bar, on Instagram: how remote can I be, or should I be, or am I? How much, and in what ways, and about what, do I care or can I care?

On the one hand, if you have too little distance—from almost anything, but certainly from politics—you're liable to be driven insane. On the other, if you have too much, you're liable to be driven sane. So sane, in fact, that you never really experience anything or anyone; you're too busy standing back and analyzing. That keeps a sort of baffle between yourself and reality, but on the other hand it renders you not fully present, or puts a distance even between yourself and your emotions, to say nothing of yourself and fellow persons.

It's worried me on and off through much of my life that I think too much and care too little. As people are suffering, I’m pondering, or playing around with them in my mind as though they were pieces in my headgame. Your suffering might be my symbol, or something I can use to make a point. Worst of all, it might just be boring; I might not even get a column out of it, much less some sort of new slant on history. Sometimes I worry, as the latest human disaster pours through the news feed, that I'm simulating emotion, that the tear the escapes my eye for Puerto Rico or Paradise, CA is the mere image of a tear, as the hurricanes and wildfires are, for me, images on a screen.

One thing I realize, looking back from this magnificent distance at a rather ill-assorted life, is that a lot of what I've done and the ways I've thought about myself are pretty distancing, pretty disengaged. I'm a philosophy professor and an opinion journalist, and one of the pleasures and dangers of both these stances is that they require you to take a couple or many steps back, to look at stuff from far away, as through a telescope. They both suggest stances of detachment, though I admit that Trump has turned many opinion writers and also many philosophy professors from analysts into end-is-nigh screechers. Not me, though, man; maybe nothing can really penetrate my Kevlar.

You get this flavor at its maximum in certain philosophers, who seem to watch humans from way outside, as though they were alien visitors to this plane. You're not going to disturb G.W.F. Hegel's equanimity, or even surprise him, according to himself. Whatever strange conniptions his wife, or the Emperor Napoleon and his armies, may have performed in his proximity, it's all part of history unfolding, just as it must. It's like spending your life in the lab observing ants. Even as I try it myself, I wonder about the decency of this approach, as well as its sincerity.

If it strikes you that this sort of detachment is an artifact of privilege, you have a point. It's a lot easier to regard Trump's slightly-coded racism clinically, or find the re-rise of racism in mainstream politics to be one interesting historical phenomenon to be explored among others, if you’re a white person, even if you're also trying to be anti-racist. For me, the question of whether Brett Kavanaugh's presence on the Supreme Court will lead to curtailing or overturning Roe v. Wade is worth discussing. Now let's go on to something else. I might get stuck right there and feel that I ought to engage in some action if I were a young woman rather than an old man.

The "objective" standpoint, that is, or as I prefer to think of it, the distanced attitude, is a luxury, it might be said, that not everyone can afford. Of course, that in itself wouldn't show that it's not desirable in some ways as well. There might be some things that you can’t see clearly in any other way, and to some extent on some matters on some occasions this sort of distance is possible for almost anyone. Or it's necessary, really.

I can’t help feeling that my particular version of the problem doesn't come fundamentally from privilege, however. I think it comes fundamentally from fear. Not feeling too much too often is a way to try to make myself less vulnerable to other people. I started out, perhaps, in a resolution not to let a particular person or situation make me mental, as it were, and the most effective way to accomplish that seemed to be to step back and examine the situation with clinical detachment, to apparently de-emotionalize. And then perhaps to use that distance for just a little cruelty or sneering; I'm detached enough to sit back and compose an excellent insult.

With regard to politics, I habitually sneer at both sides. Now, I take a great deal of pleasure in doing so, and cynicism, which is itself a great American tradition, can emerge from and embody insight. On the other hand, it's not liable to change much of anything in the world. I'm not trying to do anything about the things I'm sneering at, or all the issues that I'm treating as playthings. Or it's as though I'm taking pleasure in them. I've given up on fixing the world even in small ways, and maybe that's not good.

It's also probably too late to fix even that, though, and I'm probably not going to start trusting the world and other people enough to try to help make the world a better place for everyone. I might inch that way on some occasions, though. I'm trying? Meanwhile, the safety of distance beckons and is also, like many pathologies and moral failings, perhaps a source of truth.