The Dogs of Wha?

Here are political matters about which to miscommunicate. 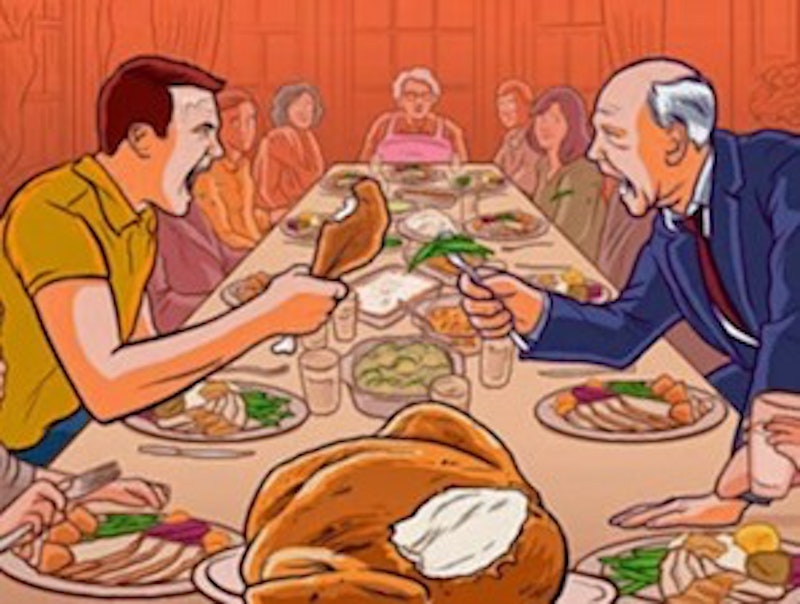 How likely are political miscommunications and arguments with your loved ones over the holidays? I put the odds at about 100 percent. Consider the following political splits, misunderstandings, and veiled threats that’ve occurred (among professionals who should know better) this month alone.

Norm Macdonald, who has for some time displayed the demeanor of a declining stroke victim yet been hailed as a quick-witted hero by some on the right, unwittingly came close to rendering all political dialogue impossible when he condemned the whole post-18th-century world, in which at long last free speech overrides aristocratic privilege, tweeting, “The Enlightenment turned us away from truth and toward a darkling weakening horizon, sad and grey to see. The afterglow of Christianity is near gone now, and a stygian silence lurks in wait.” Jeez, way to encourage independent thought.

Well, if we can’t even unite around the relative benefits of modernity vs. prior eras, can we unite, some of us for libertarian reasons and some for leftist reasons, around the cause of reduced sentencing for non-violent criminals? Sites such as Infowars have lately been surprisingly good about criticizing the police state, right? No dice. Once talk turns to letting some actual prisoners, specifically drug arrestees, loose en masse, Infowars runs a piece condemning sentencing reform efforts—even with their man Trump supporting such efforts—as a Kushner-backed, Koch-backed plot (with Kushner and Koch apparently being okay when you agree with their policy ideas but terrible warning signs when you don’t). The populace may be common and proud of it, but I guess it doesn’t include common criminals, even the non-aggressive ones.

And don’t expect tolerance and polite dialogue from the Democrats, either. California Democrat Rep. Eric Swalwell just gloated on Twitter that the government has nukes and could thus make short work of anyone who resisted the repeal of the Second Amendment, making it likely that some sort of compromise on the issue can be talked out. Horrifying that he’d consider that a civil conversation—though his arrogant threat is no worse than the routine Orwellian use of the word “voluntary” in many government edicts, really.

It’s in the interest of government and the experts allied with it to pretend they can’t tell who started it once fighting breaks out—that would require some sense of justice instead of just counting punches, after all. The ruling elite tend to err on the side of saying, like a lazy parent watching too many neighbor kids: I don’t care who started it, you’re all punished now.

So it is that over two decades ago, Congress issued a report mindlessly declaring Star Trek: The Next Generation one of the most non-violent and uplifting shows on TV and Star Trek: Deep Space Nine one of the most violent and anti-social (because of more phaser use, I guess), as if there were a real difference in ethos there to anyone paying attention. Likewise, similar experts have just spat out a report saying superheroes commit more acts of violence than supervillains in popular films. I leave it to the reader to decide if that means there’s a problem with superheroes or a problem with the shallow experts studying them.

And since everyone feels comfortable assuming your motives are terrible these days, obviously you end up condemned no matter which parts of contradictory regulations or p.c. rules you try to obey. The Boy Scouts, not too long after permitting gay scoutmasters, decided to go the extra mile and admit girls—leading immediately to the Boy Scouts being sued by the Girl Scouts for poaching the latter’s brand in callous, patriarchal fashion.

Likewise, poor Twitter CEO Jack Dorsey tried gamely holding up a sign saying “Smash Brahmanical Patriarchy” to please some Indian feminists with whom he was meeting, and for his trouble he was condemned for trashing one ethno-demographic subcategory like an imperialist interloper. The only winning move, increasingly, is not to play.

You may have hoped a generation ago that South Africa might by now, with over half its population too young to have experienced Apartheid, have become a land of tolerance, since it made a relatively smooth transition from authoritarian Apartheid regime to democracy—but alas, with it now barring white males from some government offices and turning a blind eye to certain forms of violent crime, it may switch from one form of evil to another without stopping to try tolerance (which doesn’t seem to be a natural stopping point for most people).

For somewhat similar historical reasons, more and more suburbs in the Southern United States are now toying with the idea of seceding politically from their urban centers instead of trying to get along with them. Sometimes staying away from each other is the closest people get to civility—and I suppose that’s better than violence.

Sometimes the only thing that can unite people, given their propensity to fight, is the common threat posed by nature, and indeed Gov. Jerry Brown of California showed some ability to learn from mistakes amidst his state’s giant fires this month when he said, after dismissing such ideas in the past, that he now agrees with the idea of clearing timber to reduce fire hazard.

Adversity rarely seems to bring out people’s pro-free-market sentiments, though, and when Kim Kardashian and Kanye West admirably used their own resources to hire fire suppression workers—and even deployed them to save the homes of their neighbors—they merely earned themselves condemnation from lefty Californians for possessing resources other fire victims do not. No one ever seems to draw the real lesson, which is that private companies handle all emergencies better than government and we’d all have more money with which to hire those companies if there were no more government to pay for.

And lest we get too hopeful that things will get more peaceful in the future, and that we will all be rich people in cordial interracial relationships with large homes, note that that professor who about a year and a half ago called for letting injured white people die now calls for the end of civility itself, seeing it as heteropatriarchal and capitalist. Maybe it is. And if so, maybe there are worse things than heteropatriarchal capitalism—like constant political bickering.

As long as people’s idea of what’s nice and civil means fighting to impose yet more legal restrictions on their neighbors instead of letting them be, we will have to fear and resist each other. In late 2016, a Montreal city council member briefly pushed a bylaw that would have required all dogs in public parks to respond to bilingual commands. I’m sure he thought that sounded nice for dogs and owners alike, not to mention the linguistically diverse human visitors. Yet, to anyone with common sense: what an obvious colossal pain.

Mon Dieu, as a first pass at civil discourse and a formula for ending the constant hostilities, can’t people try just minding their own business?