A Year Of #MeToo Excesses Produced the #HimToo Movement 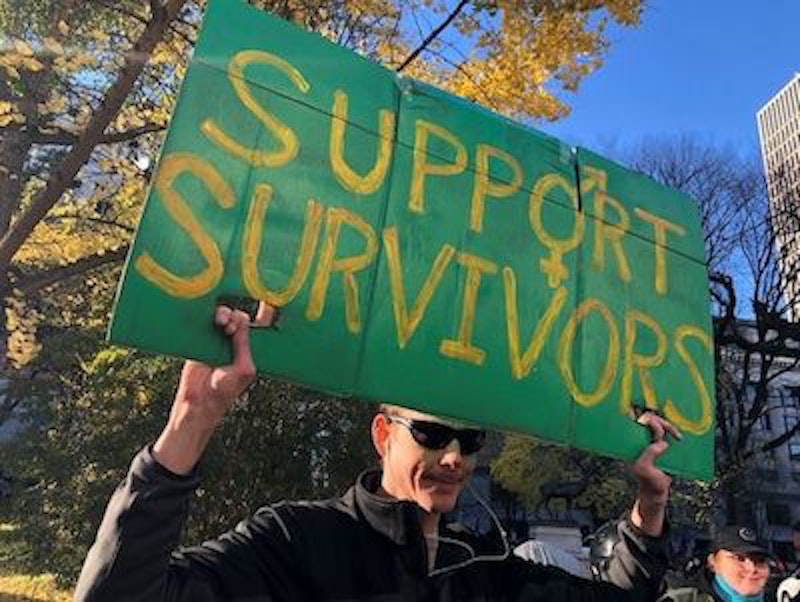 Independent Journalist Andy Ngo, a favorite journalist of the Intellectual Dark Web, attended a #HimToo rally in Portland last weekend and received the usual welcome from masked antifa soldiers. They screamed at him, told him he wasn’t welcome in the park, called him fascist, Islamophobe, rape apologist, and tried to physically intimidate him. Ngo

Videoed masked men clad in black punching and kicking people leaving after the event had concluded. The Antifa were following their normal pattern, but as Don Lemon has explained, it’s all for a good cause and “No organization is perfect.” Presumably this is the reason CNN doesn’t cover Antifa’s routine violence while never failing to cover right-wing violence.

Disparaging the #HimToo movement, a hashtag that went viral when a mother tweeted that her son was afraid to date due to the potential of false rape accusations (he then denied this was true) and was given a boost by events surrounding the Brett Kavanaugh Senate hearings, is considered a good cause by progressives like the CNN host who generally view those who’ve been falsely accused of rape or sexual misconduct as unavoidable collateral damage not worthy of much attention. These victims of #MeToo interfere with the new axiom that we’re supposed to believe all women.

It’s left to conservatives and libertarians—in particular, Reason’s Robby Soave and Cathy Young—to defend men in the “collateral damage” category. Regular liberals who buy into the ill-conceived #BelieveAllWomen ethos won’t physically assault you at a peaceful event like the one in Portland, like Antifa will—they’ll just call you a rape apologist.

The Proud Boys and other unsavory right-wing groups may be involved in #HimToo protests, but that hardly invalidates the entire concept. Julie Swetnick, who The New York Times reported was claiming she saw Brett Kavanaugh “at parties where women were verbally abused, inappropriately touched, made ‘disoriented’ with alcohol or drugs and ‘gang raped.’” She’s forgotten now, as are her lies, at least by the Democrats.

One of Canada’s preeminent novelists, Steven Galloway, had his life and mental health ruined (he was on 24-hour suicide watch for a time) even though a former Canadian Supreme Court judge—a woman—found that forcible rape and other sexual misconduct charges brought against him when he was department chair at the University of British Columbia were not credible.

The above examples involve public names, but there are many more male #MeToo victims. Doyin Richards, writing for Huffington Post, speaks for most of the Left in writing, “#HimToo is the #AllLivesMatter movement of sexual assault.” The writer offers this ludicrous piece of advice to parents worried about their sons being wrongfully accused: “Your fears would be better directed toward them being sexually assaulted themselves. The odds are certainly greater.” No doubt he’s using the broadest possible definition of sexual assault, so parents are supposed to worry more about their sons getting grabbed in the ass than having their lives ruined by a Title IX tribunal composed of sociology professors and associate directors of admissions.

Those who think like Huffington Post writers try to minimize the devastating impact a false sexual assault accusation can have by pointing out the fact—as Richards did in his piece—Kavanaugh was approved for the Supreme Court. But Kavanaugh would have had his life ruined if the Democrats had controlled the Senate Judiciary Committee, and that’s despite the fact that his accuser can hardly name any key details of her alleged sexual assault, including the year or month it happened. Nor will one person who was allegedly at the drinking party in question confirm that the party ever occurred.

Pointing out injustice of any kind is necessary if the concept of justice is to continue meaning anything. Movements like #MeToo aimed at punishing certain people can easily turn into mobs. The only way to prevent this is to establish guidelines ensuring the process is fair. This never happened with #MeToo, with predictable results. To talk about the innocent men who’ve been shafted by the #MeToo movement isn’t to imply, as many progressives do as a smokescreen, that false accusations against men is a problem as serious as women who are sexually assaulted.

If you’re for #BelieveAllWomen, then you’re against #HimToo. How do you explain what happened in the 2013–14 academic year at Colgate University, when even though only 4.2 percent of the students were black, black male students were accused of 50 percent of the sexual violations reported to the university in the same year? Emily Yoffe, who wrote about this in a three-part series on sexual assault on campus, claims that Colgate’s not an aberration. “Male students of color are,” she wrote, "vastly overrepresented in the cases I've tracked."

What’s going on? Perhaps school officials are ignoring some allegations against white men, but this alone wouldn’t account for those numbers, which are wildly out of balance. Are white women who had a few drinks feeling race-based regret the morning after and using Title IX tribunals to fix that? There’s data supporting this theory, so it should be looked into. But of course it’ll be swept under the rug, because the thought that the white college women who feminists portray as victims might actually be victimizing black men is just too hot to handle—it’s destined to remain a dirty secret of the #MeToo movement.

The #MeToo and #BelieveAllWomen movements created the #HimToo movement by accepting all accusations as evidence of guilt and denying due process to the accused. Asking people to accept something they instinctively know isn’t true is dishonest and self-defeating. Feminists, Antifa, HuffPo writers, leftists, progressives, and liberals who disparage #HimToo would benefit society more by looking inward and resolving to eliminate the mob behavior they’re prone to. This is unlikely, however, because they think way too highly of themselves for serious self-reflection.