Appreciate the fresh air while you still have it. 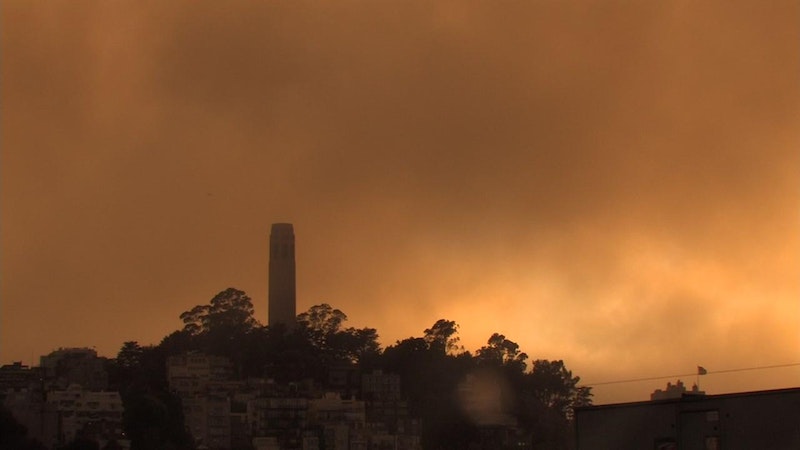 Fire is supposed to be cleansing. Fire is symbolic of our potential as humans and of a flickering sense of awareness. We use clichés related to fire every day. Something inspirational is said to “light a fire” within you. Bonfires bring us together in celebration. Campfires are supposed to bring a natural calm. But this particular wildfire, named the Camp Fire, has brought Californians death, displacement, destruction, mass confusion, eerily quiet streets, and days where the natural world feels entirely unnatural. Without sunshine, birds, and countless people, old and young, developing or exacerbating respiratory problems.

About 120 miles north of the Bay Area, this fire has devastated an entire town, and wreaked havoc on the air quality of Northern California. The town, located just east of Chico, was called Paradise. The stories of evacuation are harrowing and apocalyptical. The fire erupted more than a week ago and is still only 60 percent contained. According to CNN's latest reporting on Sunday afternoon, over 1200 people haven’t been accounted for, while 76 are dead. Nearly 10,000 homes have been destroyed. Meanwhile, the Woolsey Fire in Southern California's Ventura County, took three lives and torched more than 96,000 acres north of Malibu. This comes 13 months after Northern California experienced the Tubbs Fire, destroying huge areas within Napa, Sonoma and Lake Counties.

As the blaze continues to the north, life in the Bay Area moves on… sort of. A gray haze has blanketed the sky for days. The air went from bad to worse on Thursday and Friday, registering over 200 on the Air Quality Index (AQI). Over 150 is considered unhealthy. When the particle index tops 200 it becomes “Very Unhealthy.” Chico, Oroville and Sacramento reached 300, which is officially “Hazardous. Masks are mandatory and streets are empty.

The evening English class I teach was cancelled Thursday night. My wife started losing her voice and getting sick. Now my 17-month-old daughter’s cough has turned into a cold and slight fever. One of our dogs had serious dental surgery a week ago, so thankfully he’s been heavily sedated and recovering. The other dog isn’t sure what’s going on. She seems to be thinking I’ve lost my mind, making up games to play in the kitchen and on the steps with the toddler.

We get used to our routines. They’re a way to hold reality together. Morning coffee with morning news. Without exercise, we lose motivation for other things. I’ve dealt with long lulls in my life before. Anxiety leads to depression, which leads to questionable decision-making, which can lead to further isolation. I’m not there now. I’ve done enough work on myself (and with trained professionals) to figure out how to avoid that sinking feeling becoming semi-permanent. My life is organized around a delightfully bonkers little girl who moves fast enough to steal bases in the Major Leagues. I’m not there, but a sky that never turns blue, never seems to bring rain (until next week…) and has no hint of a sunset... that’s a sky that doesn’t bring calm or contentment. And all of this coughing reminds me of the pneumonia I dealt with just a month before my wife went into labor and our daughter arrived.

I zoom out from this perch in this mostly comfortable life I’m lucky enough to have today and realize that my frustrations and disappointments needn’t become fixations. That dipping your hand into the river, you’ll never hold the same water twice. I listen to music with my daughter and wife. We sing together. We laugh as she dances to Elmo. Despite not feeling like herself today, despite tears and a feverish malaise, she dips her knees and shakes her arms with exuberance… because Elmo is happily dancing on the television.

After the rain puts out these horrific flames and sucks up all of this filthy smoke, there will be a cool crisp morning again, with a shining sun bringing cinematic steam where the dew sits. But many aren’t so lucky. All of it up in smoke.

Donations are needed. Here are a few places you can help.