Polarization and the Counter-Factual Crisis

Increasingly, The New York Times is a mirror image of Breitbart. 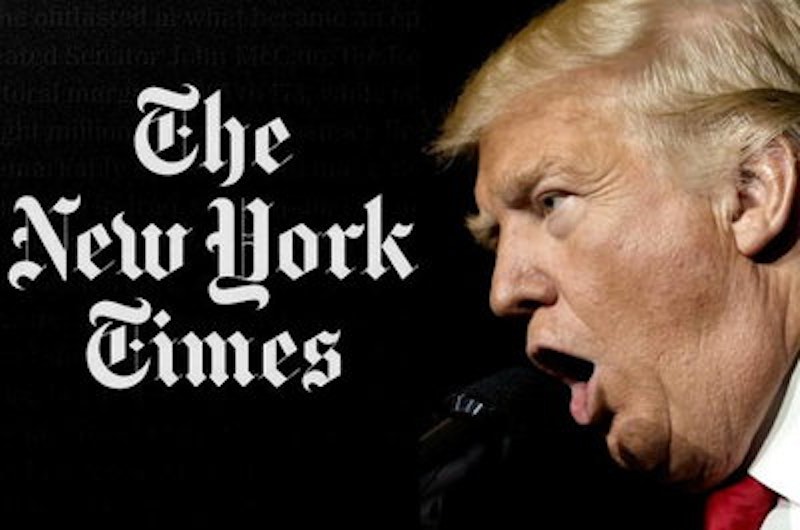 It seems impossible for people at the moment to grasp that I'm not on their side and also not on the other side. So, for example, when I predict that Trump will be impeached and declare that it will be richly deserved, I'm taken to be a Democrat. Or when I describe and sneer exhaustedly at the way CNN and The New York Times have transformed themselves from news organizations into obsessive anti-Trump ranters, it's obvious that I'm a Republican.

I don't even understand this line of thought: a society in which you could infer someone's whole politics from his prediction of whether Trump will be impeached is entirely irrational, because the whole edifice of anyone's political beliefs is completely irrelevant to the factual claim. If political ideology correlates across the population with whether people think Trump will be impeached, the right conclusion is that everyone is operating on the same standard of evidence: wishful thinking.

Be that as it may, I think that in 2017 CNN and the Times and many others compromised their own mission, as they themselves purport to understand it. Watching Jake Tapper or Don Lemon in a righteous lather every afternoon and evening: you might as well be watching Sean Hannity. But Hannity knows who he is: a right-wing polemicist. Tapper and Lemon are still purporting to be news anchors. The Times did somewhat better with a news/opinion firewall. But they should understand, as well, that when more or less all your columnists are unanimous anti-Trump verbal abusers and your every editorial hits the same tone of indiscriminate outrage, they’re making their institutional culture evident to their readers. I know and they know that they’d do anything to destroy Trump. That may even be their duty as citizens or something as they understand it. But it’s incompatible with the values and purposes of their profession.

Also, they might want to consider that Charles Blow, Timothy Egan, and Paul Krugman are, as verbal abusers, completely incompetent: excruciatingly repetitive, utterly predictable, indistinguishable from one another or thousands of others of their ilk. You could sell me a year of insults directed at the President, but you’ve got to write better than that.

These organizations may think they can take a virtually unanimous political position as individuals and on their opinion pages and also function as neutral arbiters of the facts and gatekeepers of relevant information. But this distinction doesn’t necessarily come naturally to readers, and they should reflect that they’re giving many good reasons to be suspicious that numerous aspects of their news coverage are consciously or semi-consciously devoted to inculcating their shared ideology, or to motivating rather than informing people.

To all these difficulties, they've managed to add a layer of continual self-righteous defense of their own neutrality. One of the biggest stories they covered last year was Trump's supposed repression of and misunderstanding of journalism. Ruth Marcus in The Washington Post: "How scary it is to have a president who derides us as 'the enemy of the American people.' To have a cable news network that inflames his worst instincts and recklessly flings suggestions of a 'coup' by special counsel Robert S. Mueller III. To have nearly half the public, egged on by Trump’s bellowing about 'fake news,' believing that reporters simply invent negative stories about the president." (How scary is it that Fox News exists? She slipped that one in there, but it's the mirror image of Trump's attacks on CNN, for example.) Like many alleged news stories last year, the underlying events in Marcus' crisis consisted of little but a series of tweets.

Indeed, it couldn’t be more obvious that the self-image of these newsrooms as part of the political resistance infects their news coverage every day. There might’ve been 30 tweets last year that were greeted as actual crises, covered as though they were acts of terrorism or natural disasters. The fake news is the enemy of the people. Mika had a facelift. NFL players shouldn't kneel. Jeff Sessions is “beleaguered.” In the end, almost none had any effect on anything, and yet they filled the pages and airwaves day after day.

An astonishing example of the extreme slant (and we might throw in The Washington Post, MSNBC, and the network news broadcasts) is one of the biggest stories of 2017, which has dominated the news on and off since May: the counter-factual Mueller firing crisis. What if Trump were to fire Mueller? You can ask every guest that question; you can desperately probe for leaks to the effect that he may have mentioned it. In other words, you can cover a story that hasn't happened, and that you have no particular reason to think will happen, heavily for a year. It’s an interpretation of Trump's personality, or a personal takedown. It purports to be objective coverage (of the non-facts, mind you).

Perhaps Trump will fire Mueller at some point. That would be the time to write your "Mueller-firing-constitutional-crisis" story, if you regard your primary function as reporting the facts. Or you could, instead, blame Trump for events that haven’t occurred and call that news.

Media organizations have to think about readership numbers, ratings and page views. I think they're doing well in this regard; their total anti-Trump obsession is paying off in that sense, at least at the moment. But they should also consider what sort of operations they're becoming; more and more, CNN represents a mirror mage of Fox, and The New York Times of Breitbart. Marcus, who is one of the better and more reasonable columnists working today in many ways, pretty much says right there that the job of the Post is to compensate for the existence of Fox. But to do that, all of these publications are becoming more like Fox every day.

Well, it seems like we all are, so now you're probably reading me as a Republican. If so, there's just going to be no point in trying to communicate.