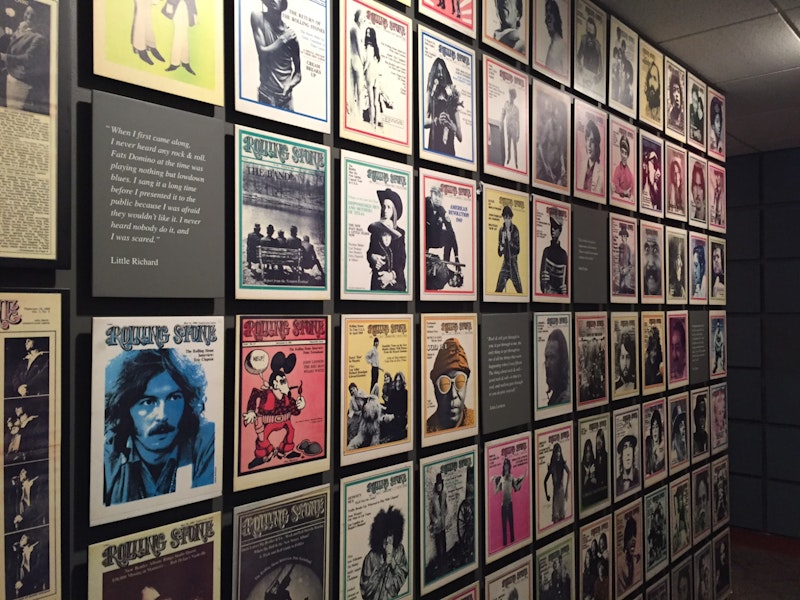 I have a hunch that one day in the 1960s someone bogarted Andrew Ferguson’s joint.

Ferguson’s essay takes the form of a review of Sticky Fingers, a new biography of Wenner by Joe Hagan. Reading Hagan, Ferguson paints Wenner as a celebrity obsessive of “ravenous ambition,” a man who is “as much a fanboy as a journalist, hoping to use his position as editor of a rising publication to bathe in the nimbus of his favorite rock-and-roll celebrities.”

Thanks to John Lennon, who Ferguson claims “had a constant need to generate publicity,” Wenner published a sensational interview in 1971 that enraged Lennon and helped put Rolling Stone on the map. What began in 1967 with $7,000 Wenner borrowed would become a multi-million dollar media empire. “[Wenner] was able to package and kind of define a culture that had, up to that point, not been defined,” Hagan recently told Recode. “It looked like a newspaper that your parents would get, except it had stoners in it. So this was like a revelation. If you’re 18 and you want to listen to Iron Butterfly, here's your magazine.”

So a young businessman sees a market where no one else does, creates a product, and gets rich. Seems like something the right-wingers at The Weekly Standard would appreciate. To a point Ferguson does, which makes his other, more emotional criticisms of Wenner so hollow. Ferguson concedes that Wenner was a brilliant editor. When the 1969 Rolling Stones concert at Altamont ended in murder, Rolling Stone won a National Magazine Award for its unflinching coverage. “The Rolling Stone article placed blame for the calamity squarely on the Stones,” Ferguson writes, “even though Wenner at the time was sucking up to [Mick] Jagger like a DustBuster.”

It was Wenner who sent Tom Wolfe to Cape Canaveral in 1972 to write about a moon launch, a trip that would result in The Right Stuff, a book Ferguson concedes is “an indispensable work of Americana and of narrative journalism.”

Summing up: As a young man, Wenner started a successful business that made him rich and has employed thousands of people. Wenner is an obsequious groupie, yet published a long unflattering interview with a Beatle, honorably blamed a concert riot on the Rolling Stones, helped publish one of the most patriotic books of the decade, let his reviewers pan bad albums by important bands, and discovered several of the best writers of the century.

Does The Weekly Standard allow such intellectual freedom, never mind editorial daring? They don’t. The Standard was founded by William Kristol and John Podhoretz (in addition to Fred Barnes, and bankrolled, initially, by Rupert Murdoch) “nepo-cons" from wealthy and influential parents. Although they never had to work as hard as Wenner, Kristol and Podhoretz have coasted for decades. With little influence in the Trump era, Kristol is turning to liberalism to get attention. Podhoretz is the worst movie critic in America.

This century, the conservative movement has put forward an army of pundits: people like Kristol, Ferguson, Ben Shapiro, Laura Ingraham, Tomi Lauren, who are aces at scolding people who have the balls to get on stage, direct a movie, or create a magazine. Jann Wenner’s star may have faded, but at least he got there on his own steam and imagination.