Did Bannon Really Say That About the Guy’s Mustache?

And how far can we trust Michael Wolff? 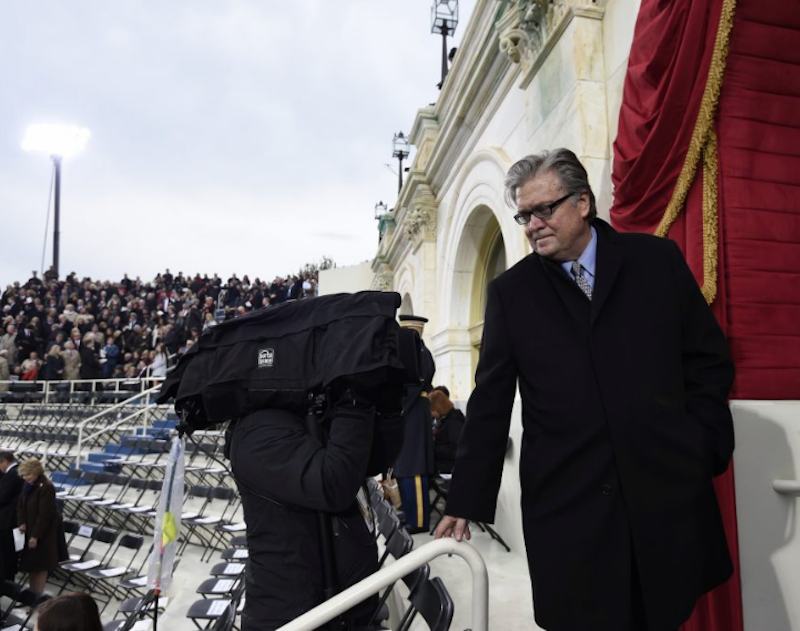 On the one hand, we already knew that Donald Trump Jr. had Paul Manafort and Jared sit down with that Russian lawyer to see about dirt on Hillary. Now we know that Steve Bannon will say the sort of thing about this meeting that the rest of us are wont to say. (“Even if you thought that this was not treasonous, or unpatriotic, or bad shit, and I happen to think it’s all of that, you should have called the FBI immediately.”) In fact, Bannon’s been stealing our lines. Told that Jared and Ivanka think that she has a shot someday at becoming president, Bannon riposted, “They didn’t say that? Stop. Oh, come on. They didn’t actually say that? Please don’t tell me that. Oh my God.”

We’ve all been living in that state of mind during the Trump Age. Now Bannon wants to move in with us.

On the other hand, we don’t really know that Bannon said to Roger Ailes that “Bolton’s mustache is a problem,” meaning the woolly handlebar that hangs off the face of warhawk John Bolton. The quotes in the first paragraph were all made by Bannon during interviews with the journalist Michael Wolff, who then included them in his new book, Filth and Finery: The Trump White House and American Decay. No, excuse me, it was Fucked and Furious: America Goes Trump. Sorry, I mean Shit Bath: Decision 2016 and Beyond. Or possibly Ivanka Knows Bald Spots: A Trump Kind of Loving. Ha, none of these. Wolff’s book is called Fire and Fury: Inside the Trump White House and several big excerpts are being run by New York magazine. These excerpts include things that Bannon said, but they also include things that Bannon reported saying, the moustache critique being one of them.

Bannon told Wolff that he sat down with Roger Ailes, the former head of Fox News, and that the two of them talked over the prospects of the incoming administration. This conversation is presented like dialogue in a novel. The bits between quote marks aren’t snippets. They’re entire lines, with “snorted Bannon” and “asked Ailes suddenly” bobbing at the end. There’s even: “Bannon took a sip of water. ‘He gets it,’ he said, after hesitating for perhaps a beat too long. ‘Or he gets what he gets.’” Perhaps Wolff was there with his cell phone up to his eye, recording everything. Possibly not, though. As it is, this lengthy and high-spirited exchange (“I wouldn’t give Donald too much to think about,” says “an amused Ailes”) would appear to have just two sources. One is Roger Ailes, who’s dead now. The other is Steve Bannon, who may not have earned the trust being shown him.

Admittedly, I have a dog in this fight. One of the book’s marquee claims is that Trump never wanted to be president. His objective, we’re told, was to take his fame from the race and found a right-wing TV network. The thought of actually winning petrified him because he’d be thrown in the deep water. I saw this point of view argued before the election, and I swatted it down based on my superior Trump insight. Trump couldn’t stand losing, I said, and he didn’t know from deep water because he was too stunted and dumb to realize his horrible inadequacy. As often happens with ironclad arguments, this one is now being assaulted by facts. Or, I hasten to say, alleged facts.

A scan of the section about Trump’s election night shock reveals that the few clear attributions are to Bannon and Ailes, the dead man. Presumably the names floating around in the section—Kellyanne Conway, Jared—will speak up in the coming days to wave off any association with Wolff’s assertions. Not that their denials would be worth much, but the absence of any denials might well indicate the truth of Wolff’s claim and the death of my beautiful theory. I can but wait and fret. In the meantime, I have to agree with Bannon about that mustache.