Another Year Gone By 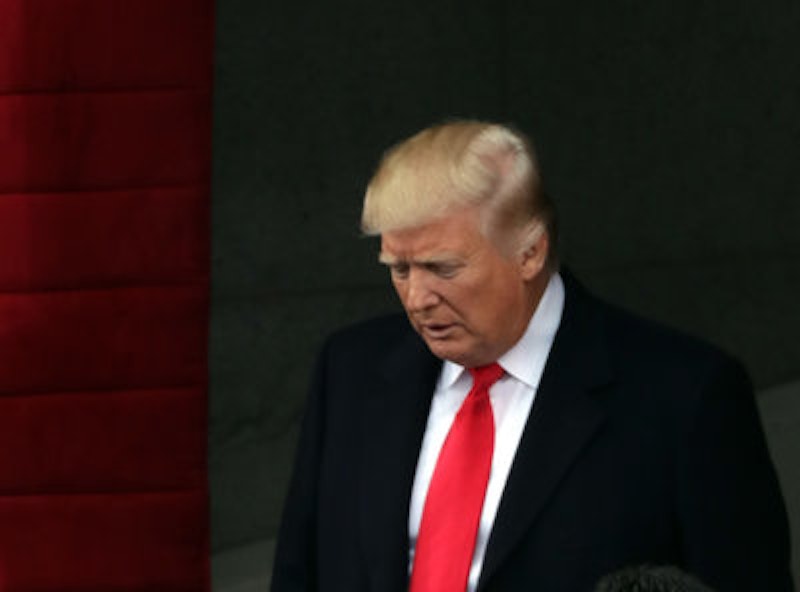 Relax. Take a deep breath. Exhale and chant Om! The panic-packed year of 2017 is over and President Trump didn’t blow up the world. Not yet, anyway. He’s been too busy picking the planet apart piece by piece – defying climate change, defiling national parklands, endangering rare birds and animals, rescinding environmental protections, helping to further muck up the tax system and health care, letting Vladimir Putin play him like a Stradivarius, engaging in spitball diplomacy with North Korea’s Kim Jong Un and, generally, making a nuisance of himself at the expense of America.

In his spare time, which is spent mainly watching (and making) Fox News – basically, news for dummies – Trump has been busy dodging shrapnel from Special Counsel Robert S. Mueller’s probe into campaign links with Russia and in creating a narrative about himself that parallels the universe most of us inhabit (again, news for dummies.)

Trump has discovered that the best way to make America great again is to withdraw it from the rest of the world and pretend that people are applauding when actually they’re jeering. Worse, Trump’s using the White House to line his own pockets and those of his family and there’s not much to be done about it. (A lawsuit based on the emoluments clause was recently tossed out of court.) Most bemusing, the sexual misconduct allegations, a dozen in all, have yet to stick to Trump as they have on others of equal fame and fortune.

On the killing streets of Baltimore, 2017 was the year of the bullet. The per capita rate of homicides was the highest ever, 343 (as of this writing), higher even than New York’s 285 murders, where there are about 8 million more people than in pismire Baltimore. Even a cop was killed with his own gun (and, suspiciously, maybe by his own hand or someone close), but the FBI declined to investigate because it (apparently) lacks a legitimate interest. You’d have thought that $215,000 in reward money would have flushed out the shooter. But Baltimore is a city where life is cheap. A person can get killed and people turn their backs and clam up. Or maybe it’s the beginning of the seventh great extinction.

At the state level, Maryland Gov. Larry Hogan’s only apparent transgression for removal in this election year is that he’s a Republican in a 2-1 Democratic state. But Hogan’s learned the secret: The best way to beat the Democrats is to act like one. If Hogan has a soft spot it’s his weakness for roads over rail, moving cars instead of people. But as an issue, that’s about as sexless as a goose without a gander. The Democrats’ gang of eight candidates will devote the next six months (until the June 26 primary) nuking each other over all the niceties that make Democrats’ hearts go pitter-patter while Hogan’s parade marches by.

Trump’s latest attempt at recessional was his recognition of Jerusalem as Israel’s capital and the relocation of the American embassy there. As a tribute to Trump’s incandescent leadership, Guatemala has agreed to follow. In a stern slap-in-Trump’s-face, the United Nations voted 128-9 to oppose the declaration, and the U.S. responded by threatening to cut its contribution. Right or wrong is not the issue here; enflaming the Arab world is. But Trump has a singular goal, and that is to please his ever-shrinking base which encompasses evangelicals who have long sought formal recognition of Jerusalem because it’s the birthplace of Christ. But Pope Francis, Christ’s vicar on earth, as Catholics believe, leader of three billion Christians disagrees, and prefers a two-state settlement with the Palestinians.

Trump’s year-in presidency bracketed the virtual elimination of the caliphate state of ISIS. And it occurred without Trump admitting that he followed to a crossed T the policies in place of President Obama. Recall that Isis was the latest manifestation of the Sunni followers of Saddam Hussein who rallied around the caliphate following his decapitation and George W. Bush’s misbegotten war against Iraq. But within the Arab world many factions emerge, and the newest bog-down is again in Afghanistan, where the Taliban has reemerged as Isis, fueled and funded by the poppy-seed trade.

Trump’s inward, fetal-position policies included formal notice that he intends to withdraw America from the Paris Climate Change Accord, which was adopted in 2015 by 196 nations. The agreement, meant to limit greenhouse gas emissions, takes full effect in 2020, but has no binding enforcement. Trump, in effect, has yielded world leadership to China on a critical environmental issue just as he has made space for China to seize the trade issue by cancelling U.S. participation in the Pacific Trade Agreement. (Trump also threatens periodically to cancel the Iran nuclear agreement.) Trump has issued tough sanctions against Russia at the same time he butters up Putin personally. And contrary to the judgement of American businesses, Trump’s preparing tough new penalties in the trade disputes with China, whose help he needs to bridle North Korea.

When liberals stack the federal courts with judges, it’s called writing new laws; when conservatives pack the courts, it’s called interpreting existing law. Few presidents have moved as rapidly as Trump to fill federal court vacancies, many of them held open because the Senate refused to act on Obama’s judicial nominations. Trump claims as one of his outstanding achievements the appointment of Justice Neil Gorsuch to the Supreme Court, extending the 5-4 conservative-leaning divide on the bench. Keep in mind these are lifetime appointments. Two of Trump’s federal appeals court nominees were recently rejected. One never tried a case in court; his credential was being married to a White House staff member.

The Trump-Ryan-O’Connell tax overhaul is Trump’s singular legislative accomplishment. Though he signed and ballyhooed it as a major Christmas gift to the nation, the full effects of the plan will not be felt until after the 2018 mid-term elections, in 2019. Already the plan is causing confusion and chaos over the pre-payment of 2018 property taxes in high-tax states (such as Maryland’s Montgomery County.) The IRS has hastily ruled that pre-payment is allowed only in limited situations. That backfire should anger lots of property taxpayer-voters. So, here’s another conundrum: The tax brackets and withholding amounts can be manipulated to show significant paycheck benefits throughout the 2018 election year, only to have the payback come due at tax time in 2019 when workers get slammed with a huge tax bill.

So, it appears that the full intent of Trump’s first year in office was to eradicate any trace or legacy of Obama’s eight years in the White House. It makes you wonder whether Trump would be so fixated if Obama were white. But Trump will do anything to please his know-nothing base (including Fox News). Trump failed miserably to fulfill his promise to repeal the Affordable Care Act, so he’s picking it apart, piece by piece, and failing even at that. And from every indication, Trump will be rebuffed if he tries again to totally dismantle Obamacare. Nine million enrollees are counting on it. And in his first turbulent year, Trump political adventures were a disaster – losses in Virginia, New Jersey and Alabama, where Roy Moore’s defeat reduced Republican control of the Senate to a dime-thin margin of one seat.

In the world according to Trump, 2018 is supposed to be the year of infrastructure, the dreamers (DACA), a government funding agreement and another attempt at repealing Obamacare. But to Democrats, it’s the year of optimism about the 2018 elections and recapturing control of Congress.

Mort Sahl, the comedian, observed that “anyone who maintains a consistent political philosophy will eventually be tried for treason.” Trump needn’t worry.