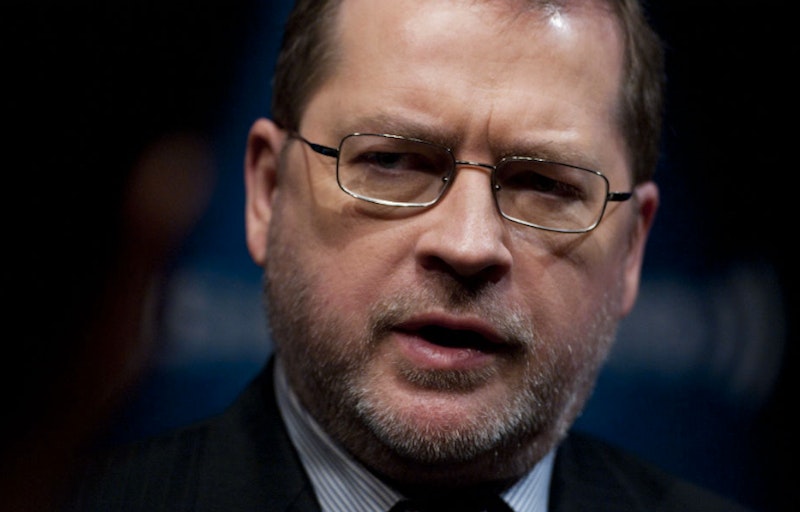 Go look on Grover Norquist’s website for a pledge signed by Donald Trump. You won’t find it. Two months ago Norquist was hopeful about Trump. Time put it this way: “He says he not only supports Trump, but has faith that the New York real estate mogul will be a game-changing president for the cause of small government. In turn, Trump has verbally agreed to the pledge, though Norquist is still waiting for a signed copy to put on his website.” The pledge is the typical Grover Norquist pledge not to raise taxes. And the operative phrase is “still waiting.”

Here we have another sign that Reaganism is done. (The previous sign: born-again pols have no use for born-again Mike Pence and accept him only because of Trump.) Reaganism’s top issue is its ban on raising taxes, and Norquist has made a career of clubbing GOP politicians into respecting that ban. Republicans who wanted to run for office found it smart to sign the Norquist pledge (the Taxpayer Protection Pledge, as it’s called). Doing so showed the party hard core that a candidate was the right brand—Reaganite on taxes. Not doing so… well, it was like he didn’t want to get in the game. In 2012 only Jon Huntsman refused to sign, and look what happened to him.

Pledge-wise, this cycle started much like the others. From The Washington Post (“Nearly All the GOP Candidates Bow Down to Grover Norquist”) last August: “Other candidates who have signed the Pledge either this year or in the past include Marco Rubio, Rand Paul, Ted Cruz, Rick Perry, Carly Fiorina, Rick Santorum, Ben Carson, Bobby Jindal, Scott Walker, Lindsey Graham, John Kasich, Jim Gilmore and Mike Huckabee. In other words, only three of the 17 candidates haven’t taken the pledge: George Pataki, Donald Trump and Jeb Bush.” Today that’s a list of the dead. Except for one name, of course, and Grover Norquist is waiting on that guy’s staff.

Taxes aside, Norquist could see Trump was bad news. A year ago, when Trump was talking about Mexican rapists, Norquist said, “If he got the nomination talking like that, it would be a big problem.” Norquist didn’t seem sold on a Trump pivot: “The question is, is he capable of turning on a dime when the camera shines on him and saying, ‘Here are my standard, boring traditional Republican views’ with maybe a couple of colorful additions?” That was August. In November the problem became bigger, in particular for Norquist and his wife: she’s Muslim, and Trump began saying Muslims should be kept out of the U.S.

But Norquist fell in line. Like many others, he did so during the first week of May, when party loyalists swallowed hard and realized Trump had the delegates. Trump didn’t make life easy for the conquered. On a Sunday show that weekend, the nominee-in-waiting mused about taxes. “For the wealthy, I think, frankly, it’s going to go up,” Trump said. “And you know what, it really should go up.” But Norquist had surrendered and he stuck to it. The Time interview, held in June, is painful reading. “I don’t quite know what he was trying to get at there,” Norquist said, responding to a Trump quote that hinted at deficit spending. When Norquist laid stress on Trump’s Reaganite campaign platform and Reaganite Congress, Time said, “You make it sound like he could be the most fiscally conservative president since Ronald Reagan.” Norquist: “Yes.”

A year ago candidates still kneeled to the Norquist pledge. But they kneeled to a mirage: voters cared a lot less about the pledge and a lot more about Trump. By the time summer was done, the pledge had become an afterthought. Instead the party fussed about pledging Trump to be for and not against whoever was nominated. Now, during the second summer of Trump, Norquist accepts that his pledge is something that can get lost on a desk. Time asked Norquist if Trump would sign. Norquist: “I have talked to his staff and they say he will. They have it and he’ll get it but they’ve had a smaller staff so I have a request in for that.”

But Norquist said he could be a stickler. “I don’t consider it signed until it’s on the web for everybody to see—it’s not just me,” Norquist told Time. The pledge still isn’t there, Donald Trump isn’t turning on a dime, and Mrs. Norquist may not be voting Republican. Also, Ronald Reagan has been dead a long time.