Public Will Soon Find Out if Clinton is “Short-Circuited” 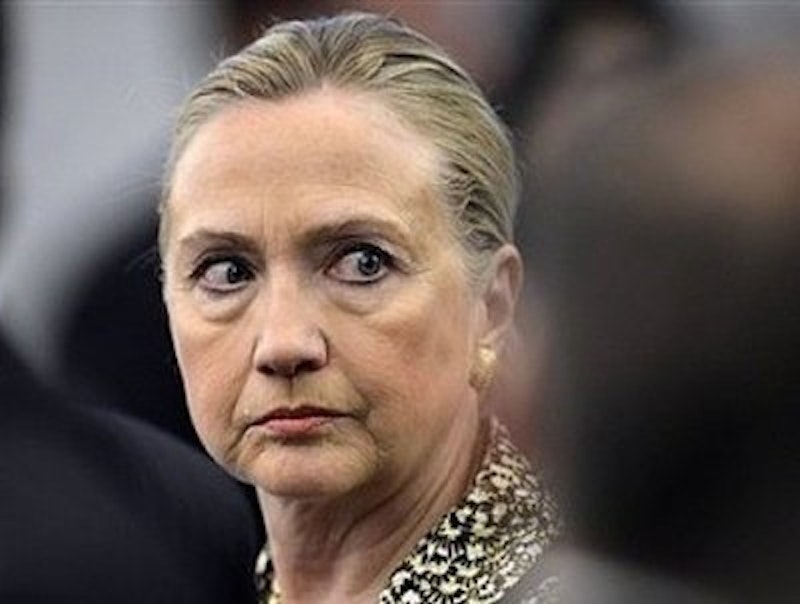 Hillary Clinton’s not a liar. She’s a lawyer. Clinton does exactly what lawyers do, notably lawyers turned politicians—dissemble, fudge, parse, deliberate, shave the truth, reach for ambiguous words and slippery phrases and, when necessary, avoid talking at all. Mental reservation and sophistry are essential to the lawyer’s repertoire. These verbal somersaults, standard practice in hyphenated and apostrophized advocacy firms, are often considered mendacious. They are, but they aren’t. Ask any lawyer.

Thus, we hear Clinton, the former secretary of state, oil her way around the email issue once again: “I may have short-circuited, and for that, I will try to clarify, because I think, you know, Chris Wallace and I were probably talking past each other, because of course he could only talk to what I had told the FBI, and I appreciated that.”

That rambling, evasive string of disjointed sentence fragments is one among many reasons Clinton’s trust factor is in the red zone. She might as well have said she was deliberately being evasive. It’s highly amusing to watch Clinton wriggle when facing hard evidence or a tough question. It’s equally entertaining to watch Clinton agonize in public over how hard she must work to convince voters she’s leveling with them (releasing her tax returns is intended to boost her honesty). She could’ve put the email mess to bed months ago by simply saying she was wrong, yet she leaves the impression that some evil lurks behind those evasive non-denial denials. If Clinton had anyone other than Donald Trump for an opponent she’d be in deep dip.

Another case in point is the Clinton Foundation (and those pesky emails again.) This time the electronic trail revealed a Foundation factotum intervening with Clinton’s State Department on behalf of a generous foreign donor. There, the ubiquitous Huma Abedin had interlocking roles as Clinton’s confidant at the State Department, the Clinton Foundation and a consulting firm with links to the Clinton foundation. In the Clinton world, as was evident during Bill Clinton’s eight years as president, access costs money (remember the Lincoln bedroom sleepovers for deep-pocket donors and those thousand dollar a head coffee-klatches?). And now, as then, instead of acknowledging that smack-in-the-face evidence doesn’t lie, the Clinton campaign dusted off their handy (if over-used) shibboleth that those meddlesome right-wingers are up to no good again. There’s a law-school maxim that Clinton must’ve learned well: If you have the facts, argue the facts; if you don’t have the facts, just argue.

And add this to the pile-on: nobody, least of all the die-hard loyalists of Bernie Sanders, really believes that Clinton had a midnight conversion to the progressive cause. They’re convinced that beneath the pants suits beats the heart of a centrist hawk who’ll chuck the liberal agenda if and when she makes it to the White House. As with any lawyer, Clinton did what she had to do at the time to make her case.

Over the life of the Republic, 25 of the nation’s 44 presidents have been lawyers. And one, William Howard Taft, (1909-13) went on to serve as chief justice of the Supreme Court (1921-30). Both President Barack Obama and his wife, Michelle, are lawyers as are the two Clintons. Bill had to surrender his law license following the Monica Lewinski scandal. In the current House of Representatives, 170 of the 435 members are lawyers, and 60 of the Senate’s 100 members are lawyers. Lawyers dominate legislatures across the country.

Lawyers in high public office have been problematic by their own brand of twisted logic. Many become convinced that they’re not so much above the law but just beyond reach of it. Take President Richard Nixon, for example, who, in his paranoia, imagined he had extra-legal powers that brought him close to shredding the Constitution. His attorney general, John Mitchell, admitted under oath to conducting widespread investigations of Democratic governors and using wiretaps for political purposes. Mitchell even once threatened the administration of Maryland Gov. Marvin Mandel to use his and Nixon’s law firm, Mudge Rose, as state bond counsel or face consequences.

Nixon’s understudy, Spiro T. Agnew, a night-school lawyer, began following the white envelope trail as a zoning commissioner in Baltimore County and continued through the Maryland State House as governor and finally got caught pocketing No. 10s as vice president. Agnew protested his innocence all the way to the courthouse where he forfeited his law license and paid a $250,000 fine that he borrowed from Frank Sinatra. Agnew’s favorite all-occasion lawyerly escape-phrase was, “There’s nothing illegal about that.” He even once defended as perfectly legal the use of his name as a director on letterhead stationary of an Annapolis bank launched by his cronies after he was elected governor.

The legal fudge factor was very much in play during Bill Clinton’s narrow escape over the Monica Lewinski affair. Clinton was impeached, true. But he was also nailed for perjury, and the charge turned over Clinton’s interpretation of what constitutes sex. Clinton’s statement: “I did not have sexual relations with that woman, Miss Lewinsky.” What the lawyerly Clinton meant by that was that there had been no vaginal penetration, a very narrow legal interpretation. He also argued that sex did not occur because the liaison did not result in a climatic finish. Yes, but…

Another lawyer who eventually was tripped up by his own double-talk was Gov. Mandel (for whom I was press secretary.) His most haunting press conference statement concerned whether he acted to benefit political cronies in a race track sleight-of-hand: “I am not involved, I’ve never been involved and I have no intention of getting involved.” A federal jury disagreed. Mandel and five of his political pals were convicted in the racetrack scheme in which Mandel had been accused of using his office to enrich his friends in exchange for money and gifts. The conviction was later overturned after a lengthy series of appeals.

The first advice any attorney gives a client is to clam up and not talk to anyone. Clinton’s taking her own legal advice. It’s been more than 250 days—who’s even bothering to count any longer—since Clinton has held a news conference. She’ll take a question here and there and will sit for interviews with selected reporters. But no wide-ranging, free-for-all facedowns in the mosh pit with reporters who are there to elicit answers for the public. Lawyers advising public officials and candidates frequently forget that their clients also have an obligation to the public. Clinton is giving herself good political advice but bad legal advice.

From a purely political approach, controlled silence is the surest strategy for the candidate who’s ahead. The only risk in facing the press is embarrassing questions and the chance of a flub (Clinton’s “I may have short-circuited…”) and another setback. For example, if Trump had kept his mouth shut following the conventions instead of picking senseless fights and making outrageous statements he might still be even, or maybe ahead, in the polls. The best advice for any candidate who’s ahead is, hop a jet and get out of town until the election’s over.

So in a sense, Clinton is so scripted and programmed that she’s almost mute. The lawyer Clinton is calling the shots and her handlers are following the brief. And every time a crisis develops, Clinton goes into hiding and a team of mouthpieces emerges to defend the candidate and attack the straw-man enemy of right-wing evildoers.

But the day of reckoning for Clinton is a month away when she must face the press and the public in the first of three scheduled debates—that is, if Trump shows up (he boycotted one of the primary debates). There’s no ducking or running for cover in the face of 50 million viewers and a panel of sharp interviewers. Clinton’s responses will be sliced and diced for a week thereafter and maybe we’ll discover what she meant by short-circuited.