Did a Blonde Just Shiv King Jabba of Fox?

Rough justice in the national alleyway. 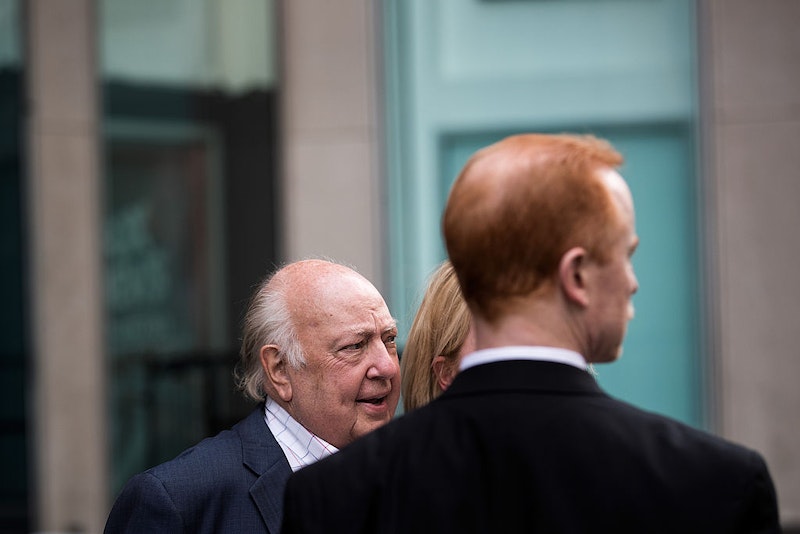 True, Roger Ailes is guilty; look how quickly he cleared out of Fox News. But what about the Shine memo? This is a document in which Ailes informs Bill Shine, his head of programming, that they’re going to give Gretchen Carlson’s TV show “another chance.” The memo is dated September 23, 2015, and follows the one-on-one meeting in which Ailes supposedly told Carlson she’d better put out for him. Carlson said no, and Ailes proceeded to sandbag her career at Fox. Or so Carlson alleges in her harassment suit against Ailes. The memo appears to show otherwise. But, memo or no memo, Ailes is now an ex-head of Fox News.

Possibly the memo’s fake—which would seem like a boneheaded move, but what else is new? For their part, Carlson’s lawyers keep an open mind regarding authenticity while taking an optimistic view of the document’s contents. “This memorandum, if authentic, actually bolsters Ms. Carlson’s claim,” they assert in a court brief. Not to a layman. Instead the memo seems to show some bones being thrown: “Gretchen wants her slot back on Culture Warrior with Bill O’Reilly. Take his temperature on it… We might as well put her on Fox & Friends for a promo segment…” Enthusiasm isn’t evident, but neither is retaliation. And the memo does say, “I met with Gretchen and I think we’ll give it another chance.”

But perhaps Carlson is pulling a bold and risky move, by which I mean she’s lying about the September meeting. If so, her ploy is simple. File the first sex harassment suit against Ailes, and a crowd of victimized women will show up; then your case can blend with the crowd and get taken for fully authentic. Of course, Carlson would have to have known what Ailes was up to. I think that’s possible. “He’s a disgusting pig who’s been getting away with this shit for 20 years,” says an unnamed “former employee.” Barbara Raab, an ex-producer at NBC, indicates that word about Ailes had reached Fox’s competition. She says she finds it “stunning only that he survived so long.” Carlson, there at Fox, heard plenty more and put up with her employer’s boorishness about her looks. Having aged out of usefulness for the network, she added a made-up incident of sexual extortion, talked to a lawyer, and readied her shiv.

Admittedly, under my theory Carlson doesn’t have a secret tape, a lack that throws in doubt the highly probable quote she attributes to Ailes (when discussing how they’d feel after having sex: “Then you’d be good and better, and I’d be good and better”). My theory also assumes that Greta Van Susteren, Neil Cavuto, Kimberly Guilfoyle, Sean Hannity and many others at Fox News are liars or impervious to fact. That’s because they all say they never heard of harassment at Fox. Here I feel more comfortable. Jeanine Pirro says of the charges, “This is something that is totally inconsistent with the man I’ve known probably longer than most people who work in that building.” All right, but it’s Jeanine Pirro. A Fox personality may well be a liar or fool. Or even a shiv artist, as with my hypothetical Gretchen Carlson. It’s hard to trust someone who studied Virginia Woolf at Oxford and now wants to do “Culture Warrior” on The O’Reilly Factor. Did Carlson ever believe what she was telling the public? Should we believe her now? We’re supposed to because she’s telling a story of sexual harassment. But I’ll take these things case by case.

Even a Fox news host deserves sympathy if they’re the victim of harassment. Yes, even Andrea Tartaro, if her allegations are true. But even an alleged victim can be doubted if they work for Fox. By and large, I bet the Fox harassment stories are true (and there are allegations, from victims giving their names, that concern doings by Ailes from long before Fox). But consider the source and look out for counterfeits.

Makeup blogger scores. “It’s like the large-print edition of women,” says Meli Pennington, blogger and makeup artist, who’s explaining why the typical Fox gal has so much makeup and shiny hair. “You think of Hugh Hefner’s girlfriends,” she says. “As he got older, they all get brighter and blonder. Look at Anna Nicole Smith.” Pennington’s quote was first published by The Atlantic and recycled by The New Yorker. Here’s another mention for her (and for honesty’s sake, I’ll admit that the “large-print” sentence comes at the end of the quote, not the start). Hitting the nail on the head is a rare gift, and Pennington whanged that sucker.