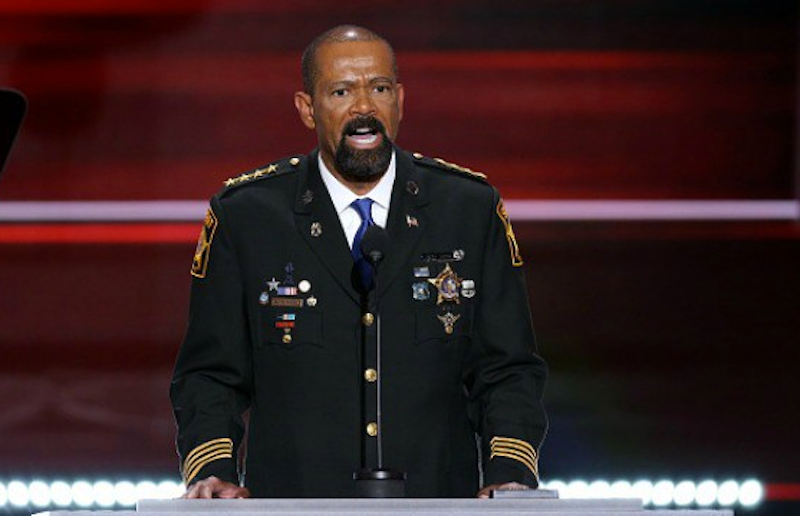 Milwaukee County Sheriff David Clarke doesn't mince words when it comes to the Black Lives Matter movement. He's gone so far as to say they'll eventually partner up with ISIS, and last year referred to BLM members as “black slime” who need to be “eradicated.” Now that a black Milwaukee police officer has shot and killed Sylville Smith, a 23-year-old armed man who refused to drop his gun during an arrest attempt, and there’s chaos in the streets, Clarke is right in the center of the storm.

Such harsh criticism of black activists would easily have earned Clarke the “racist” label in the media by now, but he's black, which calls for plan B. Due to his skin color, the sheriff is a “right-wing extremist,” as Think Progress called him in a recent piece. He’s also a frequent guest on Fox News, where black conservative voices are treasured like beloved pets.

Sheriff Clarke does tend to be hyperbolic but, in his defense, he's responsible for the lives of many law officers, and he perceives BLM as a threat to those lives. Perhaps the group's many instances of street chants calling for dead cops has put him in a state of high alert, which only seems sensible.

Despite its cop-baiting and race-baiting, Black Lives Matter is treated gently in the mainstream media, as they claim victimhood status while ostensibly fighting for justice. Such credentials provide immunization from any objectively frank coverage that could reasonably called “balanced.”

Many may think Clarke’s just a reactionary crackpot for coming down so hard on BLM, but since rising to prominence during the street protests after a white police officer in Ferguson, Missouri shot (justifiably as it turns out) a black man, Michael Brown, they've gained a reputation for lawlessness and mayhem.

Micah Johnson, who murdered five police officers in Dallas in July told hostage negotiators that he was angry on behalf of Black Lives Matter. BLM leader Yusra Khogali posted this on her Facebook: “Allah give me strength not to cuss/kill these white folks and men. Pls plz plz.” She deleted her account soon thereafter, of course, but such unvarnished expressions of hatred are hardly an anomaly within her movement.

David Clarke’s rhetoric can be counterproductively inflammatory, but he knows that his police officers risk their safety every day in Milwaukee's worst neighborhoods, where black men murdering other black men is the real problem. Murder is now the main cause of death for black males between the ages of 18 and 35, and almost all of these murders are committed by black men. Black people are eight times more likely to be murdered than whites, according to Nate Silver.

Sheriff Clarke has said, “Stop trying to fix the police, fix the ghetto,” which cuts right to the heart of the left vs right debate over racial matters, which is essentially a situation where two groups talk over each other. Black Lives Matter and the left see the police as the occupying army of an oppressive regime, all but negating any chance of rapprochement between black inner-city communities and the police. Conservatives see the situation as hopeless unless these urban communities can first heal themselves from within. There's no middle ground for them to meet on.

Black Lives Matter advocates for less police spending, which would certainly be a disaster for the black ghettos of this country. Better policing, rather than less policing, is what's needed, especially in cities like Chicago, St. Louis, and Baltimore where certain sections of town resemble war zones.

According to a Washington Post database that catalogues police killings of civilians, 990 people (758 of them armed) were shot dead by police last year, 258 of them black. Eliminate all 258 of the killings BLM’s concerned about, many of which involved armed men resisting arrest, and that still leaves 6,000 blacks killed by other blacks in 2015. One has to wonder how many of these 258, had they lived, would have been in the high-risk category for murdering other blacks. Dismissing references to black men murdering other black men as merely a right-wing talking point is done because the numbers are so stark, but you can't easily dismiss 6,000 murders, any way you try.

Black Lives Matter speaks of every police killing of a black person as a “murder,” which is simply not the case. To them, Michael Brown was murdered by a white officer, even though the DOJ did an independent investigation and ruled otherwise. Sheriff David Clarke is an “extremist” to the left, but Black Lives Matter is admirable even though there's an undeniable thread of hatred for police and white people in the movement that will lead to its eventual self-immolation.

According to the Milwaukee Journal Sentinel, over 3000 people have shared a Facebook post of the 24-year-old Milwaukee cop who killed Sylville Smith. They've posted his name and contact information, and some have incited violence against someone who hasn't even had a hearing yet. Perhaps Black Lives Matters really just hates cops more than it cares about black people getting murdered. Think Progress says Sheriff Clarke is “fanning the flames in Milwaukee,” but if this cop gets hurt, BLM is the one that will have blood on its hands.