Trump Lies About the “Death Tax”

His proposed elimination of tax is sop to extraordinarily wealthy. 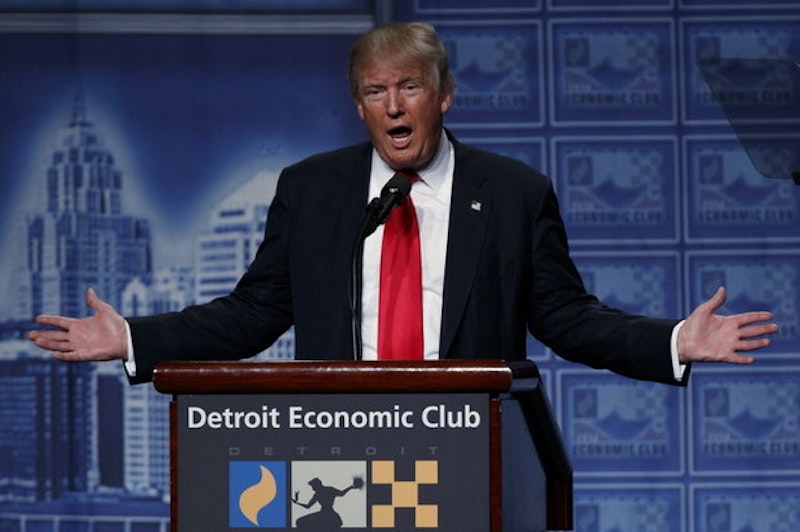 Donald Trump claims he knows of many families that’ve been “destroyed” by the “death tax,” officially known as the “estate tax.” The New Yorker lies with breathtaking aplomb, and it's doubtful that he actually knows of even one family torn asunder by this tax, but if he does, the estate they had to divvy up was at least $5,450,000 if it happened this year, and that's if it was left by just one person. A married couple will be able to shield double that amount. The roughly 998 out of every thousand people below these thresholds get total exemptions.

Trump probably gets big cheers talking about abolishing the death tax at rallies, even though he's about the only one in the building who’ll ever have to pay even a cent of it. Perhaps his fans feel they'll leave behind an estate big enough to get taxed, but odds are they just don't know about the cutoff point. Trump certainly isn't going to tell them that. He's counting on their ignorance to get elected.

Trump thinks the issue is important enough to be a cornerstone of his plan to bolster the economy, which is mostly boilerplate trickle-down material with some deregulation and infrastructure spending thrown in. The exemption threshold on the estate tax has gone up for years.

Eliminate the tax completely and you might see a negligible effect for the lower and middle classes, or you could keep it and use it to reduce the deficits that all the politicians claim are bankrupting us. Either way, its impact on the economy is insignificant, but with current income and wealth disparities the highest they've been since the 1920s, it's hard to make a case against a tax that's essentially an antidote to the generally regressive nature of the U.S. taxation scheme. Oddly enough, as modern Western countries move towards greater income disparities they’re also moving away from the estate tax, with some even eliminating it altogether. The one-percenters are consolidating their wealth now.

The estate tax is 100 years old as of this year. A main reason it was introduced in 1916 was the desire to eliminate the effects of dynastic wealth. Children inheriting great wealth often have little incentive to work. If they're not raised properly, it's easy for them to become leeches on society, producing nothing while consuming scarce resources.

There were over 500 billionaires in the U.S. in 2015. They'll all be able to pass on at least $600 million to their children, minus compliance costs. If people are worried that it’s not fair to tax estates over $10 million per couple at an average of 16.6 percent, then raise the threshold to, say, $500 million and hit them hard. Tax them at 60 percent and upwards and they can still bequeath at least $200 million to their children. Can anyone argue that's unfair or that the children won't be able to live in luxury for the rest of their lives once they get it?

“Fairness” is often brought into the debate over the estate tax. One accusation is that it’s “double taxation” on assets taxed already, but there's no taxation on capital assets until they're sold, so owners who hold them all their lives never pay a cent on them. As unrealized capital gains account for around 50 percent of estates worth more than $100 million, serious tax revenue is being forgone without the estate tax.

Trump, who wants to repeal the estate tax entirely, is a perfect example of why we need it. The real estate developer became rich by gaming the system. He pays relatively little in taxes, doesn't pay his bills to his contractors, and uses the American legal system to weasel out of debts. He hasn't produced anything that benefits society either, nor has he created any software or business systems that increase productivity and, therefore, wealth. He hates the death tax because he wants his kids, raised in luxury and already rich, to get all of his indeterminate wealth.

Trump and the GOP could propose taxing the estates of the extraordinarily wealthy at a rate starting at 60 percent and use it entirely to pay down the national debt they pay lip service to. Not one person would suffer, but they'd prefer to see Social Security benefits cut, hurting many. Their policies are what created Trump, but he offers only the illusion of any real economic solutions.