And the Khans beat them all. 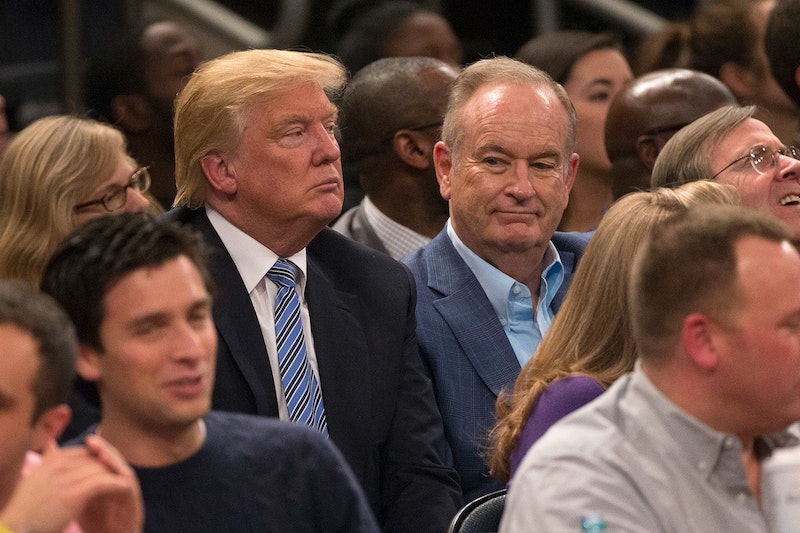 “In hindsight wouldn’t it have been smarter not to respond to Mr. Khan?” Bill O’Reilly says to Donald Trump, whose answer begins, “Well, you know. I was watching television.” O’Reilly presses his theme. “It wasn’t wise to bring the mother in,” he says, and he explains, “That just opens the door for them to hammer at you as a mean kind of guy.” O’Reilly really wants Trump to get this. “You can fight me, that’s okay,” he says. “But if there’s some little Muslim woman who loses a son, you can’t. You just can’t. No matter what she does. She can set you on fire and you say, ‘Thanks, I didn’t like those trousers.’”

Sean Hannity doesn’t throw advice at Donald Trump. “Mr. Trump, good to see you, sir,” Hannity says, and Trump answers with a simple, “Thank you, Sean.” O’Reilly, by contrast, sounds like he’s cutting his guest a break. “As I was saying in the Talking Points today, I think it’s just fair to give you a chance to respond to the President,” O’Reilly says. When the Trump mouth is running over, O’Reilly says “Awright” and takes action. Trump (on Hillary): “Look at the lie. Look at the lie. Look at the lie.” O’Reilly: “Awright. Let me refocus you back on this Khan situation.”

O’Reilly takes a high hand with Trump. Sean Hannity’s is more crotch-level. When Hannity tries a joke, it comes to grief because Trump isn’t listening. Hannity says the tracking poll had Trump ahead every day in July except one. “I’m sure you’re probably mad about that one day,” Hannity says, “if I know you.” On the broad Hannity mug, a pie wedge of a smile is tucked toward the right ear. Trump says nothing, glowers as usual. The Hannity pie wedge blips out of existence. His face drops. “If I you know you well,” he says to his knuckles. Trump laughs as if remembering to. He doesn’t seem interested, that’s all.

Hannity comes off sassiest when lining up topics for Trump to whack.  “I want to go through this issue, if I can, slowly with you,” he says. “You did call this man’s son a hero, did you not?” Later, when Trump is talking to himself about media coverage, Hannity tries to barge in. He says, “Let me ask one other thing on this…” No good, Trump is still musing. Hannity squares his resolve. Hannity: “We’ll get to that when we get back. Respond to this, though.” Now he’s into his question, and Trump waits as Hannity reads off the necessary info. “Six thousand eight hundred and seventy-seven Syrian refugees have arrived through July 31st,” Hannity says slowly, eyes aimed down and off-camera; perhaps he’s holding a card. His other hand, holding a pen, wags into view and then away, entering from screen left and leaving again. It does so twice, and by then Hannity is almost done. “Of the 6877,” he says, still reading, “6834 happen to be either Sunni, Shia or generic Muslim.” Now he looks up. “And yet we have genocide against Christians, in Syria and elsewhere,” he says frankly. “Are we then therefore discriminating against Christians?”

In the course of his answer, Trump says it’s awful what the Christians go through, “with the beheadings and everything else.” He also uses the phrase, “a friend of mine who was very, very well versed on all of this.” For a man who speaks much, Trump dwells on alleged off-camera incidents where other people tell him things. These people definitely include Bill O’Reilly, who seems to regard Trump as a project. “But if you’re president, you’re going to want, you’re going to want as many Republican senators as you can get,” O’Reilly cautions his pal when Kelly Ayotte comes up. Later Trump gets hot about the scandals in books that Secret Service agents wrote about Hillary. O’Reilly: “But you know you can make money writing those books. If you slam Clinton, if you slam Trump, you can make some money. So you got to be careful about that.”

Sean Hannity can’t even chime in with a data point. “Absolutely,” he says when Trump is discoursing on the Democratic primaries. “Well, we know it was rigged now, we have the emails.” The Trump mouth, a tight but lopsided O of white teeth against orange, stops a moment and hangs. That’s because Trump is surprised to find Hannity talking. “Oom,” Hannity says, so quietly it’s a sound in his throat. He shuts his mouth and nods. “And I’m telling you,” Trump says, picking up, and the conversation is back on track. Whereas Bill O’Reilly can deliver life lessons and Trump will absorb them. Like the one about the little Muslim woman who lost a son. The lesson: somebody like that, what are you going to do, you got to let it go. O’Reilly finishes and Trump says, “I know.” He’s quiet, rueful. They both know these things aren’t fair.