Marginal competence should lead to another Obama term. 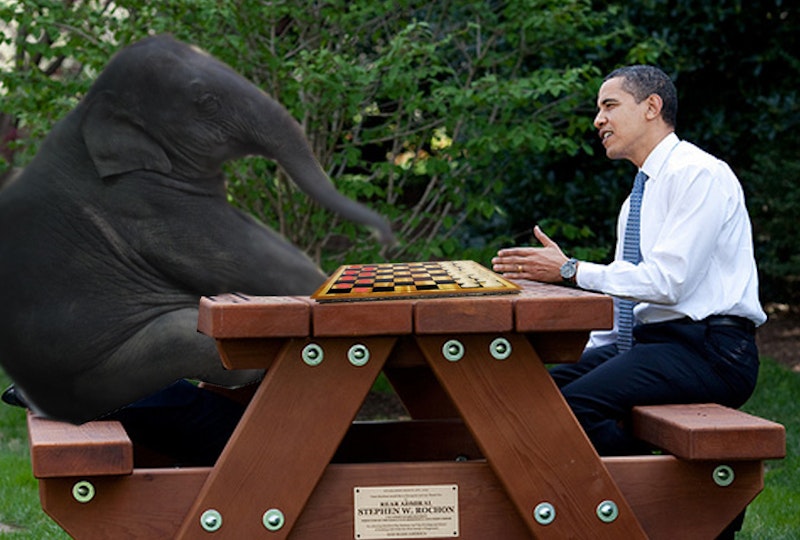 Most people following the presidential election agree that Barack Obama has lucked out in terms of his potential opponents. Chris Christie, John Thune, Haley Barbour, Mitch Daniels and Jeb Bush either really don't want to be President or else have no stomach for fighting an incumbent, no matter how bad the economy. Rick Perry, who initially appeared to be a real Texas-sized threat, choked himself on his Texas-sized foot before hopping offstage and into a gulch. Mitt Romney, Newt Gingrich, Rick Santorum, and Ron Paul are all united in that it seems morally impossible for any of them to win the nomination. It's like watching a marathon in which none of the competitors are able to find the starting line, much less the finish.

Why is the Republican field so weak? Paul Krugman airs one popular view, which is that the Republican Party has gone insane. As a result, the Republican candidates are forced to babble nonsensical and unpopular bullshit to placate the base, making the candidates unelectable in a general election. As Krugman puts it:

The long-running con game of economic conservatives and the wealthy supporters they serve finally went bad. For decades the GOP has won elections by appealing to social and racial divisions, only to turn after each victory to deregulation and tax cuts for the wealthy—a process that reached its epitome when George W. Bush won re-election by posing as the United States' defender against gay-married terrorists, then announced that he had a mandate to privatize Social Security. Over time, however, this strategy created a base that really believed in all the hokum—and now the party elite has lost control.

Another popular argument is that Obama is just so damn clever that he's boxed the GOP into a corner. Andrew Sullivan makes the argument most recently in regard to the contraception flap:

The more Machiavellian observer might even suspect this is actually an improved bait and switch by Obama to more firmly identify the religious right with opposition to contraception, its weakest issue by far, and to shore up support among independent women and his more liberal base. I’ve found by observing this president closely for years that what often seem like short-term tactical blunders turn out in the long run to be strategically shrewd. And if this was a trap, the religious right walked right into it.

There's probably some truth to both of these arguments. George W. Bush's disastrous presidency has left the Republican Party establishment and the GOP coalition in serious disarray. And while Sullivan's knee-jerk Obama-knows-all raptures are ridiculous, the President is a smart politician, and may well turn the contraception fight to his advantage. More likely, he'll simply wait it out without suffering any long-term damage.

Overall, though, it seems like Krugman, Sullivan, and the punditocracy in general is probably engaged in that cardinal sin of punditocracy—over-explanation. To explain the lousiness of the Republican field, you don't need a self-destructing Republican party or a genius president. You just need a bunch of candidates who aren't especially good at campaigning.

And that, in fact, seems to be what we've got. Perry's inability to remember his own stupid talking points was a fairly spectacular example. But Gingrich's failure to register to be on the ballot in his home state seems perhaps more telling. Similarly, Nate Silver reports that, despite oodles of cash, Romney has put together an oddly lackluster organization:

When I visited the various campaign headquarters in New Hampshire, Mr Romney's office was the busiest and the best run (although Ron Paul’s was reasonably close). Still, Mr. Romney’s office in Manchester was the only one he had in the state. In contrast, Barack Obama, Hillary Rodham Clinton and John Edwards each had 16 field offices in New Hampshire in advance of the 2008 primaries there. And if one field office can keep you covered in a state like New Hampshire, where pretty much everything is within a 90-minute drive of Manchester, the same does not hold true in a larger state like Michigan (Mr. Romney’s web site lists only one campaign office in the state).

In contrast, Obama's campaign famously defeated the favorite Clinton by its careful attention to the delegate process, picking up caucus wins around the margins in place like Wyoming and Maine where enthusiasm and ground game could trump Clinton's establishment advantages.

Ron Paul seems to have a better grasp on the nuts and bolts of the campaign. But he's been less than impressive in his handling of the revelations about the racist newsletters he used to publish. When Obama was faced with similarly inflammatory associations, he delivered one of the greatest speeches on race in modern American history. Paul, in contrast, has mostly declined to say anything except, "I'm really not a racist."  I like the guy, and wish him success, but have to admit that with a response like that, he deserves to win exactly as many states as he has. Which is to say, none.

And that leaves Santorum, a candidate with extreme views on social issues who has nonetheless run a scrappy campaign, with strong debate performances and strategic caucus wins. Still, in his last election bid in 2006, Santorum lost his incumbent Senate seat by 19 points.  In most years, that would make him a joke, not a potential victor. But with such ineffectual competition, who knows? One thing's for sure; Obama doesn't need to be a genius with these guys. Marginal competence—with perhaps an occasional flash of oratory—should be more than enough to get him another term.