Cheesy and helpless, the non-frontrunner shows us how it isn’t done. 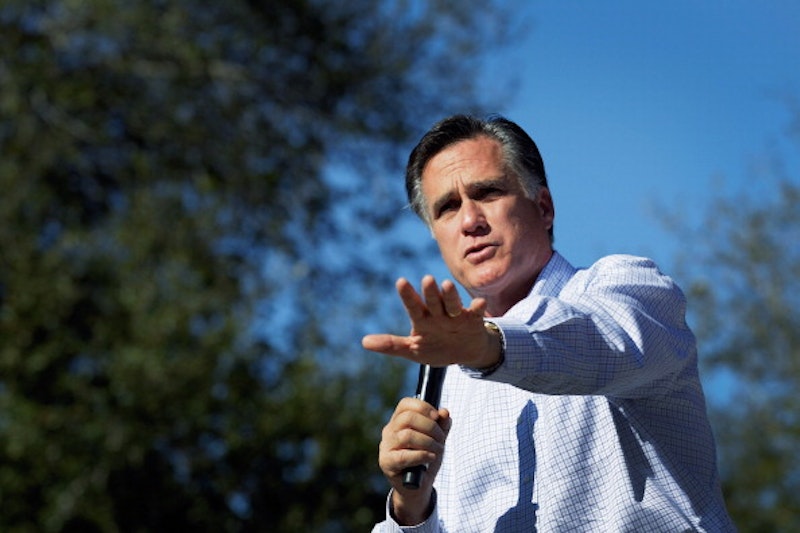 It’s not often that a politician endorses someone for president and then tells the world he picked the wrong guy. But it happened last week and the wrong guy was Mitt Romney. The attorney general of Ohio, Mike DeWine, announced on Friday that he had suffered “sleepless nights” and a troubled conscience because of his Romney endorsement. Now he had to set matters right: His man was Rick Santorum. Why? “To be elected President, you have to do more than tear down your opponents,” the attorney general said. The fellow could have pointed to a policy difference, or a difference in theme—for example, Santorum talks more about blue collar workers. Instead he made his switch all about Romney.

Of course, the man spoke the day after Rasmussen Reports announced that Santorum led Romney by 18 points in the company’s latest poll of Ohio Republicans (and by 28 points when the other candidates weren’t included). My guess is that the attorney general jumped because of these and other indications that Romney isn’t popular, then took cover behind the handiest excuse. But this excuse was Mitt Romney, the man he had just abandoned. DeWine might have wanted to shift the focus off the poor guy getting ditched. But no. A person’s lack of appeal is a real force when a turncoat can say, in effect, “I switched sides because this man doesn’t deserve to win.” DeWine can do it because nobody feels a stick-up-for-Mitt impulse.

One reason is that Romney is a bit meaner and cheesier than most politicians. From the last election there’s the well-known story of how the other candidates made fun of him while taking a pre-debate piss together. They were sick of his bullshit, to use the vernacular, because he kept attacking them for being unconservative when he was the fellow who had done the most flip-flops. This time around Republicans as a whole are getting weary of the giant negative ad barrages that Romney has used to hammer down opponents, which is the point DeWine alluded to.

Romney is supposed to be our fatherly chief executive, but he does not have class. The lack also shows up when he gets onto the subject of himself. The Real Romney, a new biography by a pair of Boston Globe reporters, says this: “Romney became the first Olympics executive to approve a series of commemorative pins bearing his likeness. One pin depicted his face under a heart with the words: ‘HEY MITT … WE LOVE YOU!’” Cheesy and sad, and still cheesy.

The book also says Romney pouted when a disgraced predecessor on the Olympics bid committee was not only acquitted of felony charges but saw the charges thrown out.  Romney had tried to lean on the fellow to take a plea bargain. According to Romney, there was no telling how bad things might get for the man if he went to trial. The man’s view was and is different. He figures that Romney thought it would look nice to have a convicted executive on the list of troubles from which Romney had rescued the Olympics. The man has a point: When Romney’s warnings about jail time didn’t pan out, his reaction was sour grapes. The prosecutors were “inept,” he complained.

To do his leaning, Romney had got in touch with a friend of the potential convict. The friend, talking to the book’s authors, took care to say she doesn’t know whether or not Romney’s attempt at persuasion was out of line with the law. But, she said, it was definitely out of line with something. “Incredibly inappropriate” is the phrase she used. That’s the Romney touch. Nowadays people use “appropriate” and “inappropriate” without bothering to say appropriate or inappropriate to what. Really, they mean a piece of behavior matches or doesn’t match what ought to be expected of a person. Romney’s curse is to be perpetually inappropriate.

That can make him a forlorn figure, the fellow who’s always out of it—it’s no fun to walk into the pisser and have everyone else stop talking. Romney’s “LOVE YOU” pins and pile-ups of negative ads can be seen as examples of how out of place he is among our kind. He doesn’t know how we do things, and he senses as much. Watch him in the debates and you see a man whose eyes plead more often than you’d expect of a presidential candidate. During the Charleston debate, Romney lost the thread and had to ask the moderator for the question again. That wasn’t so bad, but something about the moment caused him to short-circuit. Unable to form words, Romney twitched at the moderator, begging him with his eyes to step in and set him upright. Romney tried to be jolly about it, so he winced and grinned and let his hands flop out in a mysterious heave-away gesture that he repeated a few times. It was 10 seconds of social breakdown. (Go to 53:30 of the debate.)

This was the same debate in which Newt Gingrich tore down the skies and thrilled South Carolina into a standing ovation (the don’t-ask-about-my-ex debate). Meanwhile, Romney looked like he was imitating somebody imitate Woody Allen. Has any presidential candidate done that before? For that matter, has any presidential candidate made a habit of trying to lead sing-alongs? Romney does. “Can you sing that song?” he says to the crowd. “I love that song. You know that song?” Of course they know the song—it’s “America the Beautiful.” Even so, they don’t sing. He has to carry on by himself, and his voice quavers a moment before he picks up again and marches on to the end.

Robert Kennedy used to lead renditions of “America the Beautiful,” but not as a habit. Instead something terrible would have happened—a riot, an assassination—and Kennedy would lead the crowd in easing its feelings. And in fact there was one time that singing in front of a crowd paid off for Mitt Romney. It was right after 9/11. Again, The Real Romney gives the story. He was running the Utah Olympics, and for morale’s sake he addressed “hundreds of staffers and volunteers” gathered outdoors in a plaza. A witness remembers: “By the end he had everyone singing ‘God Bless America’ but not in a ‘Kumbaya’ kind of way.” She means that it wasn’t soppy, I guess. Of course, when feeling is strong nothing seems soppy. After 9/11 everybody was singing “God Bless America,” at all sorts of gatherings—it was appropriate. But here’s what Romney learned from the experience: If you’re in front of a crowd, singing “God Bless America” works. He thinks he’s found a judo hold on us, and he can’t register the fact that he’s wrong.

You can watch as, cheesy and helpless, he sings his song. Some members of the crowd sigh-hum; most keep quiet and wait. Finally he’s done and the applause patters around him. “I love this country!” Romney announces. He thinks it came off, but he would. He isn’t a great judge of the appropriate.