Santorum’s Secret Life Comes Back to Haunt Him

Says he used to earmark, kind of liked it. 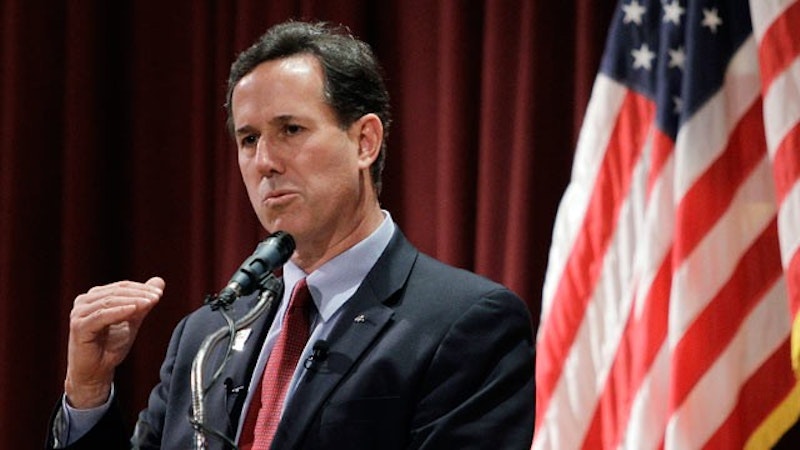 To tell Republicans that earmarks have a use is like telling Rick Santorum that sodomy is a lot of fun. But he did so Wednesday night when the Republican candidates gathered onstage in Arizona. “Because Congress has a role of allocating resources when they think the administration has it wrong,” he said heatedly. Months back in the debate cycle, Ron Paul had already uncorked the idea that Iran might have a point of view too. Now this. We have reached the end of something.

The moderator, John King of CNN, teasingly said the get-together “could be the final Republican debate.” It did have that kind of feel. Not that the contestants were tired. They still launched at one another; maybe they did so at greater length than usual, given that Santorum is (for now) the man to beat and he is not one to let a subject drop. But the experience had some odd wrinkles thrown in, perverse variations for the sake of novelty.

Most notably, the guys were all sitting down at little glowing desks that looked like nodes hatched by the giant backdrop CNN uses when hosting these sessions.  Twenty debates and the only other sit-down I can think of was a special deal: a Family Leader event where they discussed kids and godliness around a dining room table, one that had been set for Thanksgiving with pitchers of water and a ceramic display meant to represent harvest. Now here they were in Arizona, folded in half with their ties parked inches above the Lucite. If sitting is okay, how come they had to do all that standing? If standing is good, why are they now sitting? Pull one thread and the debate experience can unravel.

The ties were strange too. Four men running for president and not one of them could find a plain red tie. The odds aren’t on the side of an evening like that. They didn’t even choose manly ties. Ron Paul’s made an attempt at being red but covered itself with a coy pattern of powder-blue oblongs. Mitt Romney’s was pale blue with white stripes. Newt Gingrich had one that was purple. Rick Santorum’s was lavender—my God. Then, explaining his vote for No Child Left Behind, he said that sometimes you have to take one for the team. “I wonder which team he was taking it for,” Romney said the next day.

Conventionally understood, Santorum meant that he voted for George W. Bush’s education act out of loyalty, and Romney meant that he shouldn’t have because Bush was not on the side of America. “My team is the American people, not the insiders in Washington,” Romney elaborated. But then there’s the lavender tie. You might say Romney, the man with the demure stripes, is in no position to cast stones on this matter. But what else is new?

Romney’s official premise is quite something, of course, since George W. Bush is the last Republican to have been trusted with the White House. Romney may be counting on his listeners not to connect the dots, and he may be right to do so. After all, this form of mental abstinence has become necessary to GOP voters’ self-esteem. The Tea Party was the base’s equivalent of declaring bankruptcy.

Their loyalties and most salient beliefs produced eight years of disaster, so they’ve been disposed of and we’re supposed to take the new ones seriously. Everything that they voted and argued for from 2001 through 2008 has become a blur. Bush wasn’t in charge; he may not even have existed. It was all “Washington.” Santorum is badly positioned for this switch, since Washington is where he spent his career. On Wednesday his secret past caught up with him—turns out the authority on home schooling and Satan’s love for condoms used to be a senator.