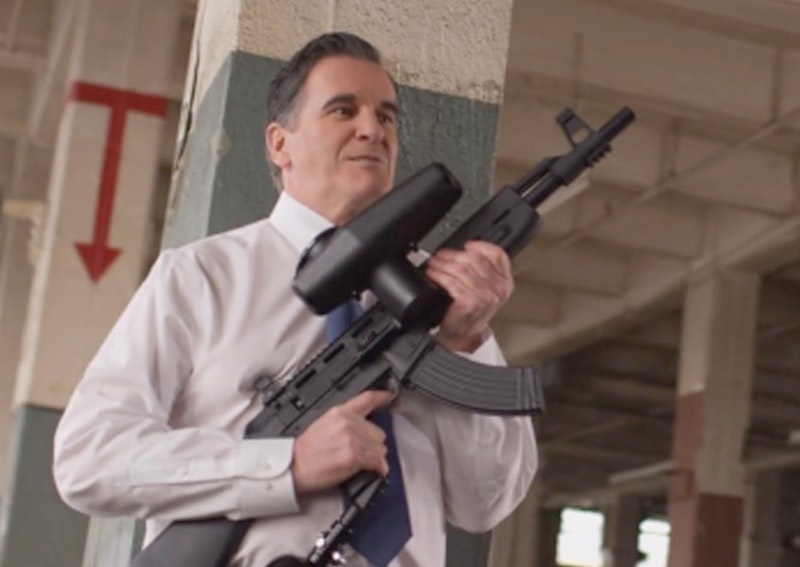 It’s difficult, if not impossible, to follow news of the presidential campaign this year without reading or hearing the harrumphs of this or that pundit revising history and claiming that America’s current politics are at new level of toxicity and a danger to democracy. Part of this is because financially-strapped news organizations are ramping up their political coverage since it’s cheap to produce, but I suspect the main culprit for all this angst—I’ll lose my lunch if I read one more lament about the lack of “grown-ups” in Washington—is that the storyline leading up to Election Day isn’t very compelling. President Obama vs. Mitt Romney? Boring. Obama vs. Rick Santorum? Just plain strange, and not likely to be an all-night nail-biter on Nov. 6.

In addition, the ridiculous amount of Republican candidate debates has made an already tortured process that much more difficult to endure, especially for the “Republican establishment” we keep hearing about, those “grown-ups” who, albeit begrudgingly, simply want the Party to coalesce behind the supposedly more “electable” Romney. I don’t happen to care much for Romney, Santorum, Newt Gingrich or gold bug Ron Paul—Gov. Mitch Daniels or Sen. John Thune were my early favorites before they decided not to run, and the inexplicably laid-back Jon Huntsman was preferable to the survivors—but I’d prefer the hobo outside my office window to Obama. The prospect of the President, unencumbered by reelection concerns is frightening for anyone who fears a lost economic decade—or worse.

Nevertheless, I had a tough time taking the normally erudite Peggy Noonan seriously last weekend upon reading her Wall Street Journal column that was a pox-on-both-houses denunciation of negative political advertisements. I don’t really think Peggy’s gone off the rails, as this particular column suggests; maybe she was just searching for a topic to write about. And in fairness, Noonan is hardly alone in her opinion about attack ads—it’s an evergreen of political journalism—but her piece was especially virulent, and hyperbolic, on the alleged societal malady.

I’m aware that every four years polling organizations release findings showing that Americans, by overwhelming margins, simply hate attack ads, but I don’t believe the numbers. Do you really think a person, contacted by, say, a Gallup representative, is going to say, “Oh yeah, those anti-Romney ads are really entertaining!”

Noonan, who wrote an excellent, prescient book about Hillary Clinton back in 2000, takes a tip from the current Secretary of State’s lifelong syllabus, and does an “It’s about the children” number on her readers. She writes:“Why are attack ads bad? Because at the end of the day they are damaging to our country and its processes, and they are most damaging to the degree their messages enter our children’s heads… [I]magine you are today 8 or 10 or 12. You watch TV, you hear the radio in the car, you go on the computer, you see the [attack] ads. They inundate you. And they make, in the aggregate, an indelible impression: ‘They [politicians] are all bad.’… We are poisoning their minds.

It’s Noonan’s fear that the escalating number of attack ads will cause, a generation from now, a dearth of men and women who choose a career in politics, “Because they want to grow up and be admirable.” That makes little sense to me. For example, after Richard Nixon’s Watergate-related crimes were revealed, not only did it result in a rash of “political reformers” but also a rush to journalism schools, as many wanted to be the next Bob Woodward or Carl Bernstein. More significantly, the urge to enter politics is a career choice that young people make—I doubt school student governments have been disbanded in the wake of Washington’s negativity—just as the law, medicine, media, technology and so on capture different imaginations. A prediction: a decade from now, a number of the more serious Occupy Wall Street protesters will run for office at both the local and national level, and become part of the dreaded establishment.

Noonan concludes with the mandatory spanking of political consultants and advertising men and women. She admonishes them: “Are you thinking at all of the net effects of your dark work? No? Then a curse upon you as you hit ‘save’ and ‘send.’ May your hand be palsied. May it lose its power.”

Negative political ads are so ubiquitous—just like the drug commercials that devote more of the 30-second spots detailing the side effects of the product—that I think people just tune them out. Besides, there are a lot worse things happening in the political world than attack ads. Congressman, for instance, voting on bills they haven’t read. Politicians like Gingrich making the crazy claim that Obama is this country’s most radical president ever. Journalists, after hearing a juicy tidbit from a friend of a friend of a Senator, immediately taking to Twitter to share their “scoop.” Members of Congress obtaining sweetheart deals on, oh, mortgages, or not paying their income taxes.

Noonan does acknowledge that inflammatory rhetoric in political campaigns date back to Thomas Jefferson, John Adams and Alexander Hamilton. The biannual rash of attack ads is, to many people, obnoxious and counter-productive, but they hardly augur the end of democracy.