Misandry and the Trayvon Martin Case

Race isn't the only thing at work here. 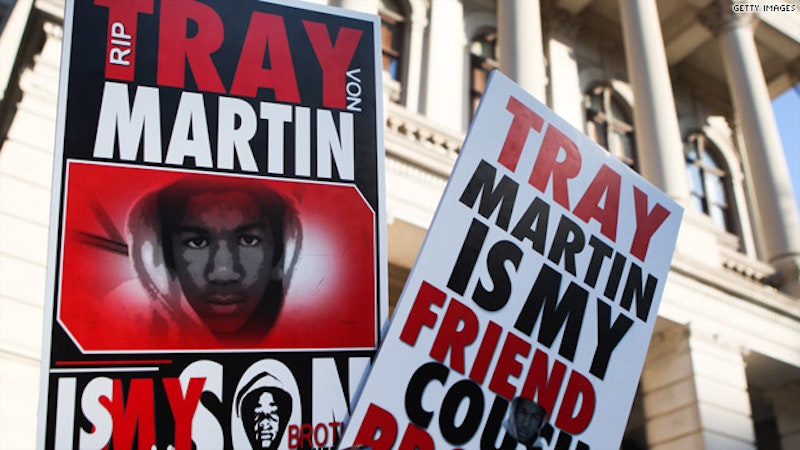 Since the Trayvon Martin/George Zimmerman case came to light, many Americans have pointed out there is a long tradition in this country of state-sanctioned terror against black men. Yes, things have changed in this country since the days when public lynchings were treated as festivals and white people photographed the crime with impunity, secure in the knowledge that they could collect souvenirs as they wished, since they would never be tried. But the Trayvon Martin verdict indicates they haven't changed enough to make killing a black man a crime.

The discussion of the Zimmerman verdict has inevitably, and justly, focused on race—on the "black" part of "black men." But it's worth considering that Zimmerman's anxiety, hostility, and eventually his violence were directed not only against Martin as a black person, but against him as a man—or, in this case, as a boy. There's every reason to believe that if Martin had been white, he wouldn’t have been pursued and shot, and that, if he were shot, his killer would not have gone free. But there's also every reason to believe that Zimmerman would have reacted much differently to a woman, of whatever race, walking nearby. Similarly, in his discussion of the verdict, Cord Jefferson talks about his own experiences as a college junior, when a security guard pulled Jefferson's white girlfriend aside and demanded to know if she was okay. As Jefferson indicates, his race was surely a factor. But so was his gender; if he were a woman, the guard very likely would not have assumed that the white woman with him was in danger.

The term "misandry" is most often deployed online against feminists, who are accused of systematically hating and oppressing men. Feminism has had many successes, but still, you have only to look at the U.S. Senate to know that women as a group are not yet in a position to impose a man-hating matriarchy.

Yet, in other contexts, "misandry" can be a useful concept. In particular, I think it can help explain the experience of how men, and particularly men from minority communities, are targeted for violence—most often not by women, but by other men. Adam Jones, for example, talks about the way that "battle-age" adult Kurdish men were targeted for extermination in Saddam Hussein's brutal Anfal campaign in the late 1980s, or during the Bosnian conflict. Closer to home, in the U.S. men are more likely than women to be victims of assault, robbery, and homicide.

Misandry helps to see these disparate incidents and statistics as related, as part of a system. Men, across cultures, are seen as dangerous and violent, which is how George Zimmerman saw Trayvon Martin. Men, by their simple presence, are an excuse for violence. Because of misandry, violence against men is necessary and justified by the fact that men are men, which can help explain why men are more often the victims of homicide and assault.

Discussions of the oppression African-American men face as men is generally couched in terms of emasculation, and the historical ways in which black men have been prevented from defending and protecting their families or from exercising power. The problem for black men, in this formulation, is not that they are men, but that they are not allowed to be men.

That’s not necessarily incorrect, but it's also useful to look at violence against black men in the light of misandry. In particular, black men, in our culture, are hyper-masculinized in just about every way, from urban myths about black penis size to urban myths about black super-predators to hip-hop's hyperbolic macho posturing. And it's that hyper-masculinization that provides the excuse and the pretext for violence. Part of what racism does is to activate misandry and the violence associated with it. As with Saddam in Anfal, maleness in an occupied people is seen as innately threatening, and must be exterminated. When lynch mobs castrated their victims and held up the penises, they were showing their triumph not only over blackness, but also over a maleness that they loathed and feared, and felt they had pacified.

Black men were not the only black people lynched, and racism can't be, and shouldn't be, reduced to misandry. But think about the ways that prejudice against black men in particular is weaponized through hatred and fear of men and maleness, as well as through hatred and fear of black people. As Andrea Dworkin wrote, in a passionate plea against misandry, "genocide begins, however improbably, in the conviction that classes of biological distinction indisputably sanction social and political discrimination."

Violence against black men is justified on the grounds that blackness and maleness are biologically dangerous categories that must be confronted with genocidal force. We need to re-think all those categories if we want to stop giving ourselves excuses to kill.