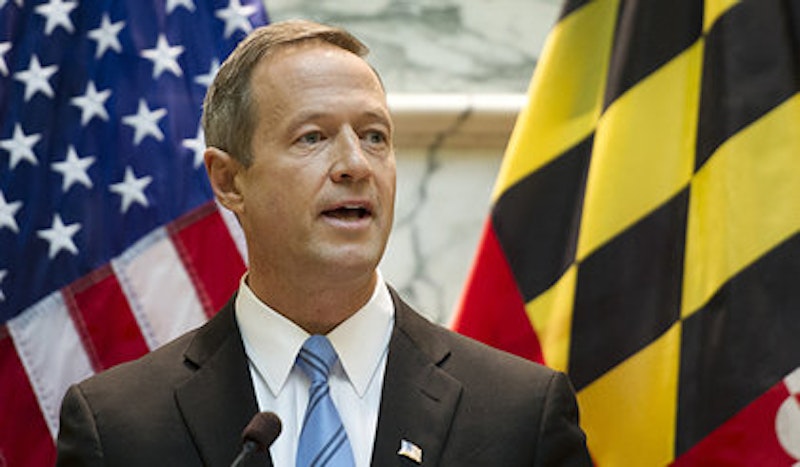 Most Maryland political hobbyists believe that Gov. Martin O’Malley is on the Democratic party’s escalator to a higher calling but nobody knows exactly what. He’s considered a possible candidate for the presidency in 2016 or, at least, a poseur for vice president on somebody else’s ticket (Hillary Clinton). And now his name is being floated as a potential replacement for Secretary of the Department of Homeland Security.

O’Malley has been the subject of media speculation over presidential ambitions mainly because of his frequent appearances on the Sunday TV shows during his two years as chairman of the Democratic Governors’ Association. He has acknowledged that he is entertaining a candidacy.

He’s also established his bona fides in homeland security from his years as mayor and his concern about Baltimore’s deep-water port. He is chairman of the National Governors’ Association Health and Homeland Security Committee and was appointed by President Obama as co-chairman of the Council of Governors, which coordinates national security matters among governors. But no one has raised the all-important question: Can O’Malley survive the vetting process? Or even more delicate, the forensic proctologic intervention euphemistically called opposition research? The theory is that everybody has a “Rosebud.” A candidate’s policies and record are another matter for intense examination.

“Vetting—to evaluate for possible approval or acceptance vet the candidates for a position”—Merriam-Webster Online Dictionary.

Vetting is an investigative process that involves peeling back the layers of an official’s life, public and private, for any hint of misdeed, misadventure or misstatement. Mostly it’s a review of the public record—news stories, statements, speeches, interviews, a casual remark—for actions and statements that do not jibe with the competition’s views or might embarrass the prospect himself. If there’s more to be discovered that could be embarrassing (the revelations about Virginia Gov. Robert McDonnell and his wife’s financial dealings, for example), then the candidate under the microscope had best demur and decline any suggestion or offer of political advancement.

But with the Oprahfication of America, the one exception seems to be sex as long as it involves public confession and contrition. President Bill Clinton overcame the Monica Lewinski embarrassment. Former Rep. Anthony Weiner (D) and former Gov. Eliot Spitzer (D) are leading the polls in New York’s municipal elections. Former South Carolina Gov. Mark Sanford (R) is newly elected to Congress. Clarence Thomas survived Anita Hill and sits on the Supreme Court. Gen. David Petraeus has been elected to top corporate boards. And Sen. David Vitter (R), of Louisiana, retains his seat in the Senate, to name a few re-patriots.

So right up front, let us posit the public fact that O’Malley’s record as mayor of Baltimore and as governor of Maryland is free of any official taint or scandal that involves misfeasance or misconduct by any key official in his administration, including the Governor himself. O’Malley has run, for the most part, state and municipal governments that are clean and straight, perhaps not above reproach but certainly well beyond reach of it. But there’s a backside to the story as well. O’Malley came to elective office as a former prosecutor and crime-buster. But it’s in this very area that his record dips into the red zone, especially if he’s to be given a serious once-over as a potential secretary of homeland security—a report that O’Malley shrugged off by saying he doesn’t want the job.

As mayor, O’Malley struggled to bring down the murder rate in Baltimore, which earned the city the title of the nation’s murder capital—ahead of Detroit and the District of Columbia. He brought in New York consultants to apply their Comstat techniques to Baltimore and he hired a tough New York cop, Ed Norris, as police commissioner. But the murder rate remained notoriously high, then nearly 400 a year, and didn’t begin to drop until after O’Malley left the city to become governor.

Norris, and O’Malley, angered the black community by importing New York’s “zero tolerance” policing policy that led to massive arrests for minor infractions. The arrests, mainly black youths, were rebuked and expunged by the courts as frivolous reasons for having a permanent record. On another matter, Norris was later indicted and sentenced to federal prison for using departmental funds as a personal ATM.

But even more damaging is the current mess at the Baltimore City Detention Center which is under state jurisdiction and is O’Malley’s albatross. It took federal investigators to learn that 13 prison guards were in cahoots with a gang of prisoners, the Black Guerrilla Family, who smuggled drugs, cell phones and other contraband into the jailhouse. The leader of the BGF was a bad-ass named Tavon White who enjoyed the pleasures of home within prison walls. White impregnated four female guards. He is reported ready to plead guilty to a racketeering charge in a plea bargain deal.

Another matter that could impugn O’Malley’s judgment is the city-owned Hilton Hotel, built at O’Malley’s insistence with city financing despite advice to the contrary and offers from private entrepreneurs to finance and develop the project. When he departed for Annapolis in 2007, O’Malley left behind a hotel with a dangerously low occupancy rate and millions of dollars in debt and behind in its bond payments. The city may now have to dip into its treasury to keep the hotel afloat while it seeks alternative financing remedies.

One man’s tax increase is another’s confiscatory policy. Among the revenue sources O’Malley has increased are: The gas tax, sales tax, alcohol tax, the “rain tax,” the “flush tax,” the millionaire’s tax, the tax on incomes over $100,000, the hospital bed tax, the corporate tax, the tobacco tax, the vehicle titling tax, transportation tolls and fees—30 tax, toll and fee increase in all, according to one count. Through it all, though, O’Malley has kept the state solvent and services full-ahead at the same time he trimmed the state payroll and reduced spending while retaining the Maryland’s Triple-A bond rating.

On the policy side of the books, O’Malley is praised by liberals and denounced by conservatives for legalizing same-sex marriage, tightening Maryland’s gun restrictions and repealing the death penalty. The latter could produce a Willie Horton ad if a so-minded opponent materializes.

As for his personal life, O’Malley had been the subject of rumors and titillating gossip—what Shakespeare called “foul whisperings”—during his years as mayor that to this day have proved unfounded. The rumors were never proven or substantiated and have quieted since he moved to the governor’s mansion.

The rumors began as the result of O’Malley’s occasional trips to New York with Police Commissioner Norris as well as his appearances in muscle shirts at local bars with his Celtic band, O’Malley’s March. The concerns about the rumors were given fresh currency at the time when O’Malley’s wife, Judge Katie O’Malley, discussed them in a phone conversation with The Washington Post’s Reliable Source columnist. The ramblings found their way into print, as they usually do, and are available to any voyeur to exploit.

Nonetheless, in the hothouse atmospherics of a campaign (or a confirmation hearing), rumors are often advanced as fact (Rep. Darrell Issa and the IRS hearings). And unproven allegations are often lethal. Often denial is the catalyst for publication for otherwise unprintable gossip. Vetting and opposition research are not necessarily about innocence or guilt. They are more about areas of vulnerability. Findings are matched against polls for soft spots and with today’s micro-targeting, computerized logarithms, talk radio and narrowcasting, an entire campaign can turn on a single errant phrase (Mitt Romney’s 47 percent) or unproven rumor (Obama’s birth certificate).

The above is just a sampling of what opposition research involves. Who knows what else there might be? When the competing campaign’s diggers arrive, the action really gets down and dirty. Though he’s been an effective governor and skilled politician, O’Malley had better be careful what he wishes for.