Texas is an Embarrassment

Legislature allows guns in courtroom, but not tampons. 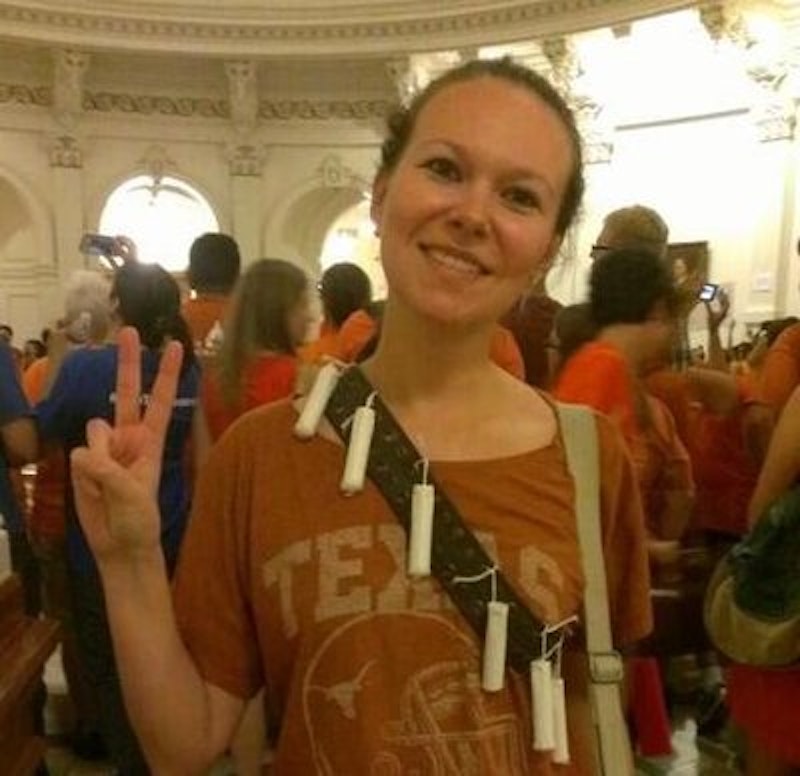 I’m not a political writer. I’ll leave serious discussions of important political and even feminist issues to my colleague Noah Berlatsky; he always seems to say exactly what I’m thinking on a topic.

But I can’t resist weighing in on #tampongate. I was innocently browsing Twitter the other day, and I always check the trending hashtags. I’m embarrassed to admit it, but this is probably where I get most of my news. If I see a city or a name or topic trending, I will click on it, then choose a tweet from a legitimate news source and click on the link to read the story. I saw #sharknado and #tampongate, and had to check out both. Sharknado, as it turns out, is a really stupid and horrible SyFy channel movie about, incredulously, sharks that fall from the sky in a tornado. (Really? I love Shark Week as much as the next person, but who actually pitched “Sharknado” to network executives?)

Alas, #tampongate was more serious. Texas legislators Friday refused to allow abortion protesters into the state capitol building with what we used to refer to in middle school as MFP (Modern Feminine Protection; the acronym coined because that’s what they called it in the stupid beach commercials). No tampons could enter; apparently the douchebags were already inside. You could, however, carry a concealed weapon into the proceedings. In other words, Texas legislators were afraid of being pelted by flying tampons, but not of being shot.

You couldn’t make shit like that up. Chants of “Friday, Bloody Friday” began surfacing on social media, raunchy George “Bush” jokes began in addition to overuse of the phrase “no strings attached,” and no doubt the writers for Jon Stewart and Stephen Colbert raised their Friday happy hour beers to celebrate how easy their jobs were going to be this weekend.

At Rachel Maddow’s blog, Steve Benen pointed out, “Sometimes the war on women is offensive, and sometimes, it's just farcical. When tampons are considered more dangerous than loaded firearms, I think it's safe to say Texas Republicans have gone off the deep end.”

Twitter went nuts. Here were some of the funnier tweets.

@Muckety The end of the Texas GOP. Period. #tampongate

@matthewbaldwin BREAKING: Texas state guard mobilizes antiaircraft guns upon learning that some of the maxipads have wings. #txlege

@YourAnonNews No taxation without menstruation. #txlege

Tweeting live from inside the proceedings, which she live blogged on Twitter: @JennStudebaker “I have been playing “Tampon, Pad or Gun” all wrong. Should have known tampon crushed gun every time.” and “I need to get my concealed tampon license renewed.”

Not all the responses to the events in Texas were taken lightly. Comparisons were made to what otherwise would have been considered a ridiculous hashtag from earlier in the week; #MotorcyleVagina was used to describe events in North Carolina in which the legislature attempted to pass abortion restrictions during what was planned to be a motorcycle safety bill. Feminists around the Internet took serious offense at the shenanigans in both Texas and North Carolina, using them as an example of misogyny and hate towards women.

Elizabeth Plank at PolicyMic asked, “Why are they taking pads and tampons away from women? To punish them for having a uterus? No of course not. That's what SB1, the bill that will shut down most abortion clinics in the state, is there for,” adding, “Anyone else starting to think that Texas is turning into the worst episode of Mad Men ever?”

Eventually, the Texas capitol was shamed into ending the “policy,” and began letting women in with their menstruation management of choice. Before the end of the day, the two massive Twitter storm fronts of #Sharknado and #tampongate hashtags were threatening to become a superstorm #tamponnado hashtag.

And me? I think what I’ve always thought. Government needs to stay the hell out of my vagina.