How Capitalism Screwed Me

The corporation is set up to separate the people who make decisions from those affected by those decisions. 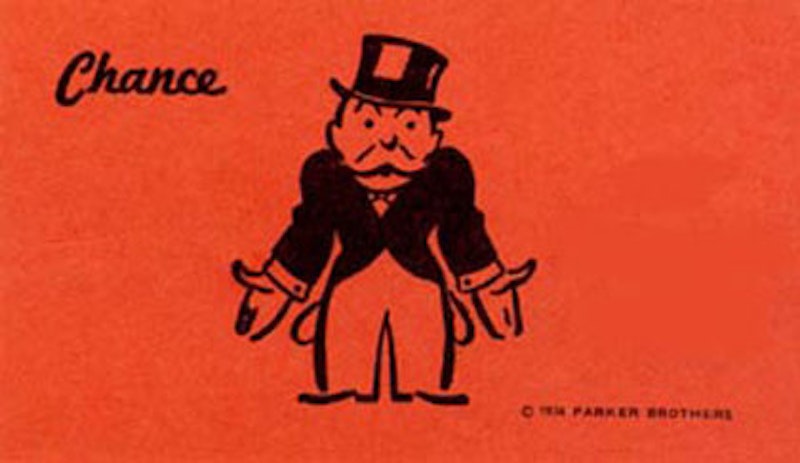 Like everybody else, I wonder when the recession will finally be over and the federal mandate that legally requires everyone in the middle class to constantly worry about money will be repealed. Will it be in months? Years? Decades?

As far as I'm concerned, the answer appears to be "not yet, sucker." Last week, my main client went bankrupt, owing me somewhere in the neighborhood of $10,000. Various corporate minions have attempted to assure me that I will get some portion of that money paid at some point. I'll believe it when I see it, I guess.

In retrospect, I should’ve seen it coming… they've been fucking with me for months. First they delayed all my projects because they were "restructuring." Then they set new due dates, but I couldn't invoice because there was some sort of "new contracting system" which wasn't set up yet. Then they finally issued contracts—but those contracts were back-loaded, so I got paid less up front, and they had longer to futz around waiting to pay me (they established a two-month wait for payment, which is ridiculous.) Around this time, there was some admission about cash flow problems, but I had already done a ton of work, and was stuck. Besides, I finally had contracts. I figured I was safe.

Looking back. I feel like an idiot. Why didn't I see they were going to screw me? But you don't just automatically assume that people are going to screw you. When you talk to folks, you don't think they're lying. And yet, when it turns out they were lying (or relaying someone else's lies), you feel like a dope—like it's your fault, even though they're the ones who are acting immorally and betraying your trust. This is why people are embarrassed to admit they've been scammed. Which suggests that capitalism is maybe one big scam itself—a giant machine for fucking people over and then having them feel guilt and self-loathing because they've been fucked over.

If capitalism has the power to make you feel bad when you're kicked, it has equally impressive resources for insulating the kickers from any similar qualms. Perhaps the most enlightening aspect of last week has been the extent to which corporate procedures not only bracket ethical questions, but also seem designed expressly to bracket ethical questions.

Again, in the run-up to the bankruptcy, the company reorganized. As a result, the folks I had worked with for years were bumped to another portion of the conglomerate, and I was interacting with new people—people who, not coincidentally, seemed to have less authority, and weren't able to do much of anything without clearing it with a superior. When the shit hit the fan, therefore, none of the individuals I was talking to had much of a relationship with me. Moreover, none of them were in a position to tell me anything, or even to vaguely pretend that they had any chance of even figuring out whom I might talk to who could do anything. Similarly, the people at the restructuring hotline were clueless. When one of my editors actually gave me crap about an upcoming deadline, I just assumed that she hadn't been told about the bankruptcy. I mean, there was no official communication to me; I'd had to find out through word of mouth. Maybe even the company’s employees weren't being told. It seemed possible.

The corporation, then, is set up to separate the people who make decisions from those who are affected by those decisions. No one has to look me in the eye and tell me that they're going to rob me; it's always some superior who’s doing the evil deed. As for the minions, they don't even know enough to confirm or deny whether I am in fact being robbed. "Somebody told someone who told me that we'll pay you someday, maybe, if you keep meeting your deadlines like a good little drone. Why are you making trouble or me, anyway? I'm just trying to do my job."

And I’m still a good little drone, to some extent. I'm not revealing the name of the company that screwed me because I hope that maybe they will pay me something, and that I'll be able to finish the projects I've got lined up and get paid for them. So I end up protecting the thugs who held me up because otherwise I'm afraid they'll hold me up again. Blackmail doesn't get any purer.

In some ways it's a relief. I've been worried for months that something was going to go wrong, and now that it has and I know the worst, it's actually kind of freeing. And we have savings and my wife works; nobody can really afford to lose $10,000, obviously, but we can still pay our bills. I'm sure other folks affected by the bankruptcy are worse off. And then, there's something to seeing how the beast works up close. I'd say you can't put a price tag on that sort of knowledge, but of course you can.