Most Americans View Congress as a Distraction

Yet the populace is just as divided as the institution it reviles. 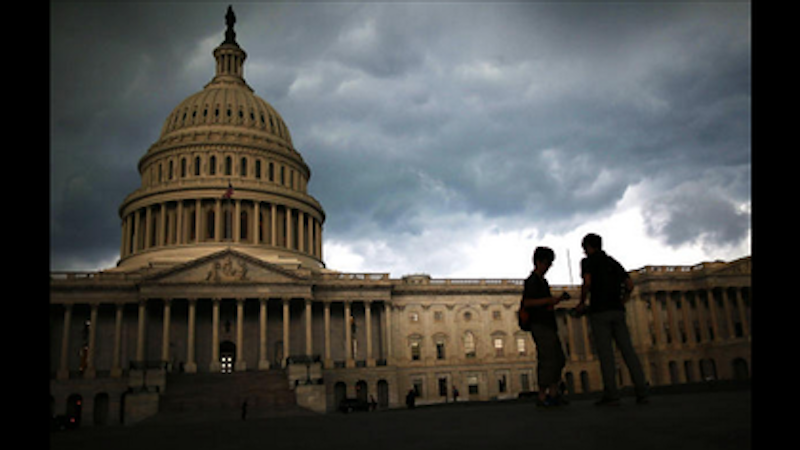 It’s an iron law of governance: Whenever Congress falters, legislative action reverts to the states and the courts to pick up the slack and make new laws or trash old ones. We have, without question, one of the most feckless, unproductive Congresses of all times. In its place, a cohort of aggressive state houses whose legislative output, for good or ill, fills the void where Congress fails and the courts interpret laws to their whim for lack of action on Capital Hill.

There’s no need to remind the public how it feels about Congress. They’re all bums except my bum. He or she is okay. And as a result the same bums keep getting re-elected. But here’s a reminder anyway.

The Real Clear Politics average of five recent attitude surveys toward Congress puts the institution’s approval rating at 13.6 percent and its disapproval standing at an astonishingly high 77.8 percent. Individually the polls are:

The rule of thumb in polling is that any two or more reputable polls conducted at about the same time will show essentially the same results. Five polls, showing almost identical findings, can’t be wrong, nor can the voice of the people. Simply put, Congress stinks. We know it. They know it. Only they don’t care. Why else would they behave like frat house brats?

As an aside, the Supreme Court is not registering much better with voters either, a sure sign that the public has lost confidence in its institutions. A recent Rasmussen Reports survey (which skews Republican) found that the public viewed the high court’s standing at 30 percent poor—the highest poor rating ever—down from four years ago when 48 percent rated the court’s performance as good. The court’s good or excellent rating was 28 percent while 38 percent ranked it as fair. According to Rasmussen, the biggest drop-off was among conservatives and moderates.

The Supreme Court, for example, kicked back the issue of affirmative action to a lower court for further review. But the issue (in Texas) could wind up back at the state level. And when the court overturned the Defense of Marriage Act (DOMA), its decision applied only to states where gay marriage is legal. It left extending same-sex marriage rights up to the remaining 37 individual states. The gay rights lobby has already targeted 12 states where they intend to lobby legislatures for legalization of same-sex marriage. As an example of the tension surrounding the issue, Pennsylvania’s attorney general, Kathleen Kane, said she will not defend the state’s anti-gay marriage law against a pending legal challenge in federal court.

And in gutting the Voting Rights Act, the court not only usurped the authority of Congress but it sent the issue back to the states. Several states, notably Texas, Alabama and North Carolina, took immediate steps to enforce restrictive voting laws. With the 2014 elections in the near future, no one knows what mischief will occur.

To complete the triangle of public disdain, President Obama isn’t exactly knocking the voters’ socks off, either. His job approval rating is in the red zone at 44 percent, below the magic number of 50 percent where the margin of safety begins.

The major problem with the dysfunctional Congress is the partisan divide that began with the emergence of the Tea Party in the 2010 midterm elections and continued through 2012. The Democrats control the Senate 53-45 (with two independents) but lack the 60 votes to break a filibuster under the current Senate rules. Senate Majority Leader Harry Reid (D-Nev), has vowed to change the filibuster rule to a simple majority for presidential appointees who require Senate confirmation

The reverse is true of the House, where Republicans rule 234-201. But the majority Republican caucus is virtually leaderless because of the number of factions within the GOP that prevent it from following party discipline and voting as a majority bloc. The Tea Party-backed candidates control the GOP caucus through their numerical ability to dissent.

Many House GOP members are more concerned about their own re-election than any national agenda or what’s best for the country. Further compounding the gridlock in Congress is the gerrymandering of House districts that is occurring in state houses across the nation. This is especially true of the 30 state houses under Republican governors and the 26 legislatures where the GOP has veto-proof majorities. Their goal is to not only protect their own electability but also the GOP’s House seats in Congress.

A healthy mix of partisanship is the music of Democracy. But the Republican gang in Washington is little more than a wrecking crew that is determined to dismantle popular government programs that have been around since the New Deal and turn them over to their benefactors and profiteers on Wall Street. They also want to eliminate government agencies that stand in the way of their goals.

On no issue is the House paralysis more evident than on immigration. There is no consensus whatever on whether the House will act on the Senate-passed bill or if it will produce several different bills of its own. In fact, the prospect is very real that it may not act on the immigration at all.

As for shooting the dead after the battle, the House has voted 38 times to repeal the Health Care Affordability Act (Obamacare) and now plans a 39th vote following the White House’s announcement of a year’s delay in requiring businesses to offer employee health care coverage or pay fines.

And on the initial farm bill go-around, Speaker John Boehner (R-Ohio) suffered a humiliating defeat when he was unable to muster a majority of Republican votes. On a second try, the House passed the farm bill, 216-208, by stripping out supplemental nutrition programs, i.e., food stamps, Meals on Wheels, that provide food for the poor, children and the elderly. They did, however, add $195 billion in “pork” for corporate farmers.

So as a result of Congress’ inaction, state houses are bustling with activity, especially on social issues which allow Republicans to play to their base and to solidify support among white conservative voters. Democrats, too, have been equally forceful on issues that make their hearts go pitter-patter.

No Democratic state house has been more aggressive than Maryland’s. Following Congress’ failure to act on gun control legislation in the bloody aftermath of the Newtown school shootings, Maryland, along with New York, Colorado, Connecticut and several other states, adopted some of the strictest new gun controls in the nation. Maryland also abolished the death penalty and joined 11 states and the District of Columbia in legalizing gay marriage.

By contrast, there has been an almost fanatical push in Republican state houses to force anti-abortion legislation to the margins following Congress’ refusal to deal with the issue raised by Rep. Trent Franks (R-Ariz.). This is especially true in Texas, where two special sessions of the legislature were convened before strict new abortion limits were finally adopted and sent to Gov. Rick Perry (R) for his signature.

North Carolina, Wisconsin and Ohio have also moved aggressively on the abortion issue. In Ohio, for example, a strict anti-abortion measure was defeated but the same language was incorporated into the state budget at the last minute without public notice or hearings. Gov. John Kasich (R) signed the budget (and the anti-abortion language) into law.

In another extreme case, Republican Gov. Terry Branstad, of Iowa, has given himself the authority, under a new state rule, to personally decide, case by case, which Medicaid patients can get abortions. The state of Iowa pays for about 20 Medicaid abortions a year. According to published reports, there have been 40 measures restricting abortions adopted in conservative states houses so far this year and more than 170 enacted since 2011.

States like to call themselves the test tubes of democracy. They describe themselves as showcases of innovation and a vanguard of experimental legislation. State governments are, after all, closer to their constituents than Congress and theoretically more responsive to the needs and wishes of the people. To many Americans, Congress is almost an abstraction. Many voters may never actually see a representative or a senator except on television.

Yet in a larger sense, the voters are as divided as members of Congress. The lines of demarcation are along class, race, religion, demography and geography. Democrats control population while Republicans lay claim to geography.  Democrats are packed into warrens along both coasts and Republicans occupy the vast open lands in between. In many ways, the electorate mimics the very Congress they complain about. H.L. Mencken observed that “Democracy is the theory that the common people know what they want, and deserve to get it good and hard.”