Why the naked Donald Trump statue isn’t as funny as you think. 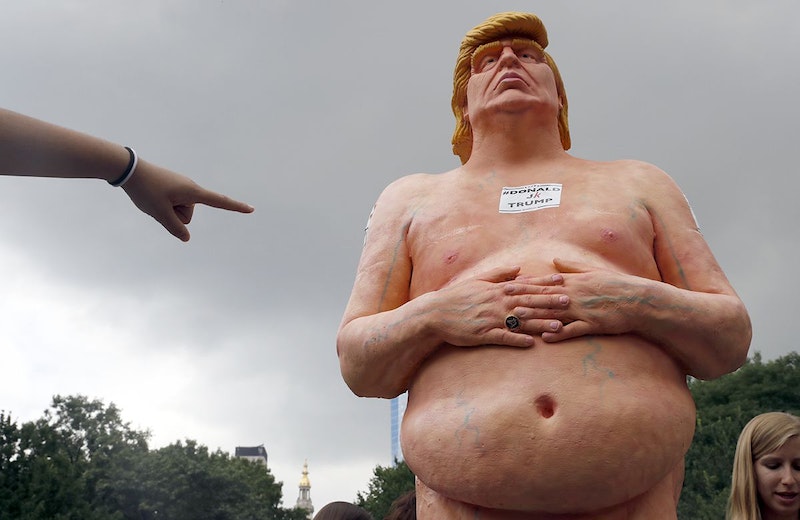 Recently, someone erected a likeness of a naked, shriveled Donald Trump in a New York City park. A great many people videotaped it, photographed it, favored associated memes and Tweets, and generally made merry, yukking it up. I’ll confess to being tickled by the NYC Parks’ department’s withering, coded rebuke to artist and subject alike—more incisive, in its way, than the artistic statement itself.

The symbolic vilification of politicians has a long and storied history; our nation’s leaders have been viciously caricatured, demonized, bafflingly juxtaposed with dictators, burned in effigy, taunted via billboard and bumper sticker alike. None of that stuff is new, and to be politically involved is, over time, to become inured to the other side portraying your champion as the scum of the earth. That’s inevitable; that isn’t going away.

Within this campaign season, though, the goalposts have shifted. I’m not referring to memes that posited Bernie Sanders as a beacon of muso authenticity and Hillary Clinton as the epitome of normcore. I’m not referring the video where Sanders is presented as the leader of a ridiculous noise band from Vermont.

For reasons that have been enumerated by pundits and writers on this site, I’m no fan of Donald Trump. He’s vain, reckless, unstable, and a cancer on civility and measured discourse. Whether he wins or loses the presidency, he’s had a net negative effect on this country. He has without question brought out the worst in many of us.

But to stoop to his level by stripping him bare, by rendering him unclothed and displaying his imagined nakedness as freakishness is a bridge too far. It portends far, far worse, in representation and character destruction, and it’s hardly impossible to foresee paths the far right may travel in this vein to crucify the first female president of these United States. The line has already been crossed.