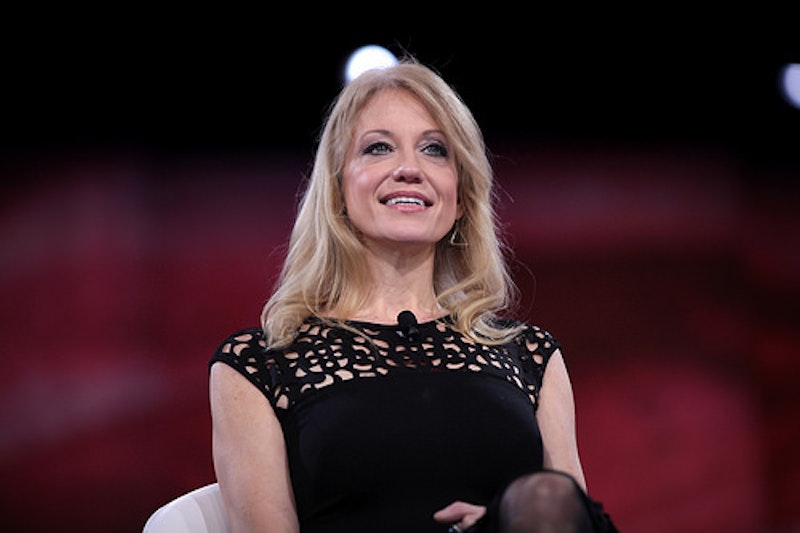 1. How does she expect this to turn out?

Kellyanne Conway’s going to sit next to Donald Trump and tell him all the things that he doesn’t want to hear. She'll "provide Trump with what he has lacked for some time now, which is a seasoned hand who will travel with him on his plane and who can try to keep him focused," says The Washington Post. NBC tells us,“Conway will travel with Trump day-to-day, giving her a chance to try and keep him on message between events. Two campaign sources predicted she would be a 'calming presence' who could say 'no' to Trump when he needs it.”

Conway's title is campaign manager, but so was Corey Lewandowski's. The main thing Lewandowski did was just be around the candidate. Lewandowski got forced out by Paul Manafort, who wanted Trump to stop mouthing off randomly for the microphones. Manafort engineered the coup without being physically near the candidate. Now Conway will be the campaign manager who does nothing but hover by Trump, and instead of telling him to go ahead and mouth off--the Lewandowski approach--she'll be telling him he shouldn't.

Meanwhile, the rival who's off scene but directing the campaign will be Stephen Bannon, who owns Breitbart and wants to get in America's face. Bannon will be thinking up ways for the campaign to generate turbulence (did Hillary strangle Paula Jones' cat?), and then Conway's job will be to keep Donald Trump from responding with turbulence of his own. I suppose Ivanka and her husband figured Conway on the plane was the best they could do as Dad decided to go all-out crazy.

2. Does this bother anyone else?

Paul Manafort was given a clue on May 5. He warned Trump not to do that taco bowl picture. Trump did it anyway. A "family member," suggested it, writes Howard Fineman, who relays the story in the Huffington Post. A family member? Supposedly they want Trump to stop his nonsense, just like Manafort does. Now this odd switch in behavior. Leaks always come with an agenda, so one looks at the description of whatever unnamed source told the reporter about this episode. But the copy's bare of any such description. Paragraph after paragraph of inside stuff, and nothing on where it came from.

The best I can surmise is that the article's very first paragraph doubles as an attribution for almost everything the article tells us. The paragraph: "This spring, as he was becoming chairman of Donald Trump's campaign, Paul Manafort told friends that the candidate knew all about his work for foreign leaders and thought the criticism he received for it was a 'badge of honor.'" There, that's it: "friends." Either that's doing the work or Howard Fineman's byline is doing it.

Katie Packer is the Republican operative who started Our Principles PAC, which tried and failed to stop Trump during the primaries. The group's one success was an ad showing women who read aloud some of Trump's piggish quotes. Kellyanne Conway, the woman on Trump's jet, specializes in helping conservative Republican candidates get through to women voters. In practice, this appears to mean helping the candidates lose the women's vote by less than they might have. The Washington Post says her client Mike Pence "lost women by five points" when Indiana elected him governor.

Katie Packer says this about her fellow operative: “With all due respect, Kellyanne is very good at understanding Republican women. But working with candidates like that and trying to not make them look like cave men—that’s a tough job. She has created a niche where candidates can check a box and say, well, they've got a woman advising them.”