Whether in the EU or U.S., let 'em work, says Todd Seavey. 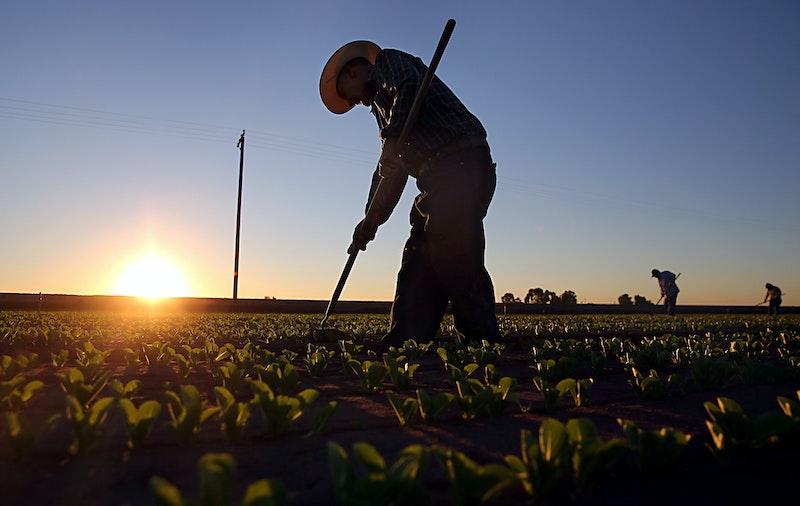 I want people to live wherever they choose without regard to political borders, only with regard to property lines. So, in principle migrants, whether from Mexico to the U.S. or from Syria to the EU, have my sympathy.

At the same time, I can readily understand people in either the U.S. or EU fearing they’ll be swamped by hordes of moochers or vandals if they’re not careful. Far from building walls and deploying troops (or landmines at the border or whatever the latest desperate plan is), though, this is all the more reason to handle this issue the cheap way: Just abolish the welfare state. Or at the very least forbid government to give resources to immigrants. A crisis might be just the time.

To some it will sound harsh—but then, so do border controls. So do military interventions aimed at altering conditions back in the migrants’ homeland, interventions that might not even work or might make things worse. And so does extracting the wealth of the native populations in the U.S. and EU to give to the newcomers.

So why not just tell the newcomers: hello, get a job, and if you don’t break anything, kill anyone, or demand a government handout, we’re good? Problem (virtually) solved, roughly zero government dollars spent, no chasing people around in the desert.

I’m reminded of a simple insight shared by Ayn Rand and Polonius from Hamlet. Rand advises being a trader rather than either a parasite or a self-sacrificer. Polonius famously advised his son, “Neither a borrower nor a lender be.” Yes, Polonius was supposed to be the goofball in Hamlet, but bear with him, as Shakespeare’s works lacked the economic sophistication of Rand’s, obviously. His advice still isn’t bad.

Both Rand and Polonius, it seems to me, were getting at the almost Taoist deeper point that sometimes you can most easily avoid problems by doing nothing, at least if you think your other two options are “attack” and “subsidize.” They also sound a bit like Calvin Coolidge saying it’s often best to just stick calmly to the middle of the road and let approaching boulders roll off to the side of the road before they reach you. Again and again, pro-government people insist we must do something—either suppress or support, forbid or mandate—and we usually end up with some incoherent mix of the two, when we could more easily have done neither and gotten better results.

Refraining from either arresting or government-subsidizing migrants also increases the odds they’ll assimilate smoothly into everyday life. Why does the native-born population assimilate to non-violent approaches to life after tumbling out of their mother’s wombs as barbarous and ignorant as any refugees, after all? Basically because when they grow up they have to keep going to work each day.

If a prosperous, non-violent civilization is our end goal, do we think we’re more likely to get there putting large numbers of people in detention centers or simply letting them work at Arby’s (or the French equivalent)? Trust in Arby’s. And the economic arguments against newcomers are as absurd as arguing against births on economic grounds would be. In time, more people mean more innovations, new forms of efficiency, and more flexibility for companies needing workers before being able to create even more desirable and cushy positions, as it has been since the invention of the wheel.

And immigrants have been leaving their old homelands’ conflicts—really ugly ones—behind in favor of new jobs for centuries. You’d be surprised how quickly they can calm down and become respectable (like the Irish among my ancestors). And if that doesn’t sound like a welcoming enough option for newcomers, swell—maybe they’ll choose to go elsewhere and once again you’re problem’s solved.

In the meantime, we now really do live in a country where, for example, your company can be fined for asking people their immigration status but also fined for hiring illegal immigrants. Government keeps trying to push or pull when it should just stand aside. How about just leaving everyone alone—and thereby letting them get to work?