Bobby… What's His Name? That Guy Who Hates Trump?

Jindal is the saddest Republican. 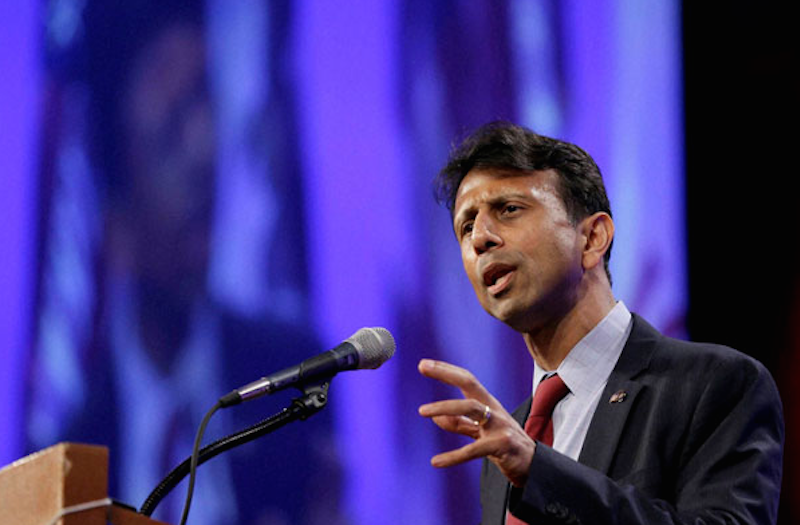 Of all the sad Republican presidential candidates, Bobby Jindal’s the saddest.

Presidential candidates crave attention like flies crave fresh dung. Without news coverage, polls lag, and donors don't even know you exist, much less where to send you money. A presidential candidate without news coverage is nowhere. That's why Mike Huckabee and Rick Perry are nude Jello-wrestling each other for the privilege of standing next to a county clerk. Does either much care if Kim Davis goes to prison for refusing to grant marriage licenses to same-sex couples? Of course they don't care. But they know someone is pointing a camera at Davis. They want to be in front of that camera, nude Jello and all.

Obviously, the main person in front of the camera these days is Trump. When Trump sees a camera a complex scientific process takes place involving the bilious gases in his gut and jowls and he expands and expands. That’s the power of Trump. Once his inflated bulk has reached full Trumpness, there’s no room for anyone else to stand anywhere amidst the fumes and bluster. Better to be hit by a tree than befouled by the wake of a reality star.

So, what do you do if you're a piddling little presidential pipsqueak with no gas in your jowls? How can you trump the Trump? The answer is clear. All the media cares about is Trump. So provide them with Trump content. The media will have to pay attention to you then.

The scheme is so obvious it's surprising that all the desperate GOP Lilliputians, from Christie to Kasich to what's-his-name, haven't tried it already. But Louisiana Gov. Bobby Jindal this week is giving it a go.  Jindal’s been paddling around in the bottom bit of the bottom bit of the Republican field; in first debate back in early August, his poor polling relegated him to the second-tier runner up debate, where he was outshone by Carly "never-held-public-office" Fiorina.

So in a desperate bid for relevancy, Jindal’s gone on an anti-Trump offensive. In the last 48 hours, he's called Trump an "unstable narcissist," and mocked Trump's inability to pick a favorite Bible verse ("Trump hasn't read the Bible because he's not in it"). Jindal's campaign manager rather bizarrely said, "Charlie Sheen is clearly Donald Trump's spirit animal," which doesn't make a ton of sense, but sure sounds mean.

I'm all for people elaborately insulting Trump, and Jindal's gambit seems sound. It's humiliating to sink to schoolyard taunts, but if you had any dignity, you wouldn't be running for president anyway. Jindal's pugnacious piffle is getting a lot of press, and if only Trump will respond in kind, the Louisiana governor is in with a chance to get those poll numbers up and sneak into the adult-table debate. You can't blame a guy for trying.

Here's the sad part, though. Check out this Business Insider link about Jindal insulting Trump. Notice the headline? It reads, "Rival campaign says Charlie Sheen is Donald Trump's 'spirit animal.'" Or this post from the same publication: "Rival unloads on 'egomaniacal madman' Donald Trump, says he hasn't read the Bible 'because he's not in it.'"

"Rival campaign." "Rival unloads." Business Insider’s editorial has apparently decided that Jindal is so irrelevant, so unknown, that putting him in the headline would just confuse readers. They know who Trump is—and that's all they need to know. Jindal can leap up and down, he can call Trump out, and what does he get for his trouble? He gets headlines identifying him only as Trump's "rival." He could be Ted Cruz or Lawrence Lessig for all the newspaper cares.

Other publications have deigned to mention the word "Jindal" in their headlines. And thanks to their generosity, the man may get a polling boost out of this stunt, and good for him.  But there's something painfully apropos about those Business Insider stories. Bobby Jindal, governor of a whole honking state, is currently running, not for President of the United States, but for that heady position: Rival to Donald Trump.