Kanye and Collins: Shredded by Intersectionality

A wigger and a drag queen. 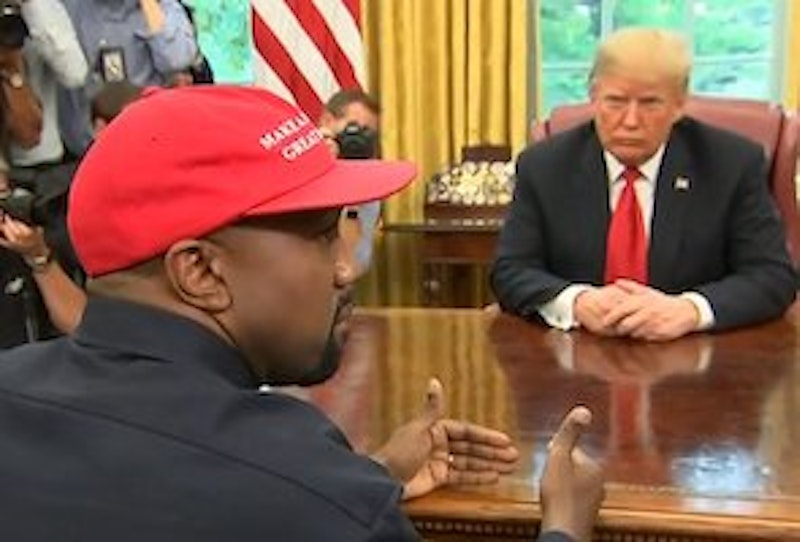 A lot of people who assert that Kanye West has gone mad are also angry at him, which lands him in the worst of all possible worlds: held not to be responsible for his actions by the very same people who are blaming him. I've been there, brother. But Kanye is being ripped apart by forces larger than insomnia. He's like the Jesus of intersectionality, crucified for our sins on the cross of fallacious reasoning. The problem isn't that Kanye makes no sense—though he doesn't—it’s that everyone talking about Kanye make no sense either. The Sufferings of Kanye have been sent to us as a message from God: if you don't generate a coherent way of thinking about race, gender, and politics, I'm going to come over and smack you.

Sen. Susan Collins has been tacked to the same wretched cross, which defines a four-box grid: male, female, minority, white. That's the menu from which we each get to pick who we are, because it's as many identities as political consultants can keep in their heads simultaneously.

People find a lot of ways to say “race traitor” and “gender traitor” without saying it, and now Kanye knows what it feels like to be a wigger in the whitebread suburbs, and Collins what it's like to be a drag queen. But though Kanye betrayed his politically-unanimous race—because Donald Trump is a racist—he kept faith with his politically-unanimous gender, because Trump’s also a sexist. The people most outraged by Kanye are also those (Michael Eric Dyson, for example) who believe that a progressive future is demographically inevitable, because of a growing coalition of women and minorities. But that inspiring coalition includes one half of Kanye West (and for that matter one half of Dyson and Collins) and excludes the other.

The American political spectrum is largely collapsing into demographics: it's not defined by what you believe, but skin-tone and gonads, and both sides are engaged in internal gender cleansing. This is one of the things you identitarians had better talk about when you talk about “intersectionality”: people like Kanye and Collins—black men and white women—have intersectional identities alright, identities that land different bits of themselves on different sides of the political spectrum. No wonder they seem a bit bewildered.

On this way of thinking, the inmost identity of each of us is a simple matrix of group memberships. But only half of Kanye's identity is invited to the progressive party. The minority member should be piping up while the man quiets down and listens to the people he's oppressed. That's how you get the Kanye we saw in the Oval, or the Collins we saw address the Senate: several people at once or no one at all. Identity politics as currently conceived confronts us all with a fateful question: is Kanye blacker than he is male, or more male than he is black? Perhaps some sort of DNA test could help with this?

What's remarkable is that Kanye is conscious of this, and he explains his own support for Trump directly as a matter of gender.

West: “You know, they tried to scare me to not wear this hat—my own friends. But this hat, it gives me—it gives me power, in a way. You know, my dad and my mom separated, so I didn’t have a lot of male energy in my home. And also, I’m married to a family that—(laughs)—you know, not a lot of male energy going on. It’s beautiful, though. But there’s times where, you know, there’s something about—you know, I love Hillary. I love everyone, right? But the campaign ‘I’m with her’ just didn’t make me feel, as a guy, that didn’t get to see my dad all the time—like a guy that could play catch with his son. It was something about when I put this hat on, it made me feel like Superman. You made a Superman. That was my—that’s my favorite superhero. And you made a Superman cape.”

Then on to the "hero's journey" and "dragon energy": straight out of the “men's movement” circa 1986.

Our politics appears to be breaking down into two race/gender coalitions, which is a remarkable development, among other things, for how disgusting it is. But the good part is that the politics it describes is impossible, because it not only separates us from one another, but separates many of us from ourselves. It's evil, but it's also silly, so I suppose we just have to watch it play out.

I’d expect no wave in the midterm elections; if you ran a computer model on this incoherent way of understanding the electorate, it would show a stalemate in perpetuity. The greater the proportion of minorities, of course, the greater the proportion of minority men, who may well respond to dragon energy and hero's journeys. More women in the Senate may well mean more white women in the Senate.