“A Scary Time” is Wrong Anthem For #MeToo Movement

The message is dismissive of #MeToo’s flaws, and the lyrics aren’t totally honest. 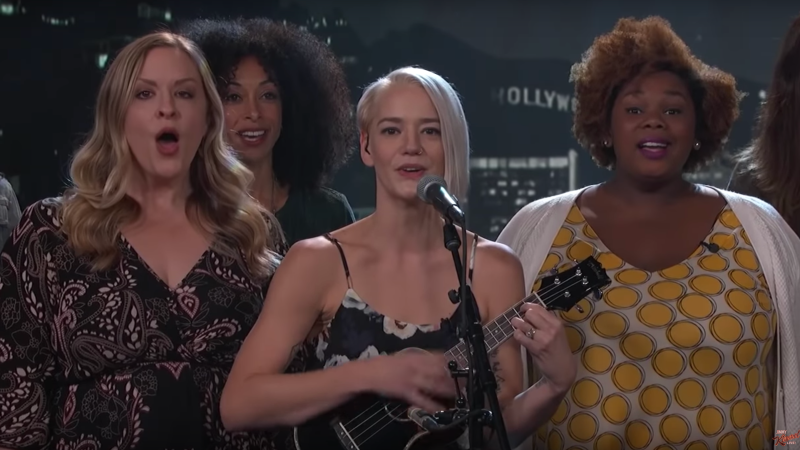 Last week, Jimmy Kimmel—reformed lad turned hyperwoke dad—had Texas singer Lynzy Lab on his show to perform her viral parody song, “A Scary Time.” Lab started off accompanied by just her ukelele, but by the time she’d finished about 20 women had drifted onstage to sing with her. To provide maximum emotional wallop, five young girls joined the group at the song’s conclusion, which brought on the tears in many homes. Kimmel, in the Trump era, has become a specialist in providing his needy audience with emotional bonding moments like this one.

Lab’s song was a reaction to Donald Trump’s post-Kavanaugh hearing remarks: "It is a very scary time for young men in America, where you can be guilty of something you may not be guilty of," he said. "This is a very, very—this is a very difficult time. What's happening here has much more to do than even the appointment of a Supreme Court.” Trump, such an arrogant pervert that he used to barge into the women’s changing rooms at beauty pageants he owned, is familiar with accusations of sexual improprieties. He wants to make sure he’s lumped in together with the men who’ve been falsely accused since the #MeToo movement began a year ago, so he’s prone to this sort of self-serving rhetoric.

His predatory past notwithstanding, Trump was making a valid point. Men accused of sexual misconduct were already assumed guilty on college campuses, due to the Obama adminstration’s interpretation of the Title IX law, but when #MeToo exploded and the mantra became #BelieveWomen, presumption of innocence went out the door everywhere. Any movement built upon faith—in this case, that people will always tell the truth—is automatically flawed. Emotions ran high when #MeToo began, so faith-based exhortations often overrode reason, but the tone has to be worked on if a movement’s going to grow in the right direction and not become a mob.

To be clear, people have had no idea how much men harass and abuse women because women tended not to speak about it until recently. In no way does the collective pain of falsely accused men even come close to what women have experienced. But a false accusation can wreck your life. Lab sings, “It's really tough when your reputation's on the line.” She means it sarcastically, but it really is tough if you’re innocent, and #MeToo should keep this in mind. It’s not that surprising that Lab wrote the song, but its message trivializes the #MeToo movement’s single worst aspect—its overzealousness—in order to lampoon a loathed president. It’s saying, “Because I have it worse than you, please shut up about your pain.”

While the song’s lyrics reveal some brutal realities women must face—“And I can't ever leave my drink unattended”—they don’t hold up to scrutiny. Lab sings that she “can't go to the bar without a chaperone.” Seriously, are we really to believe that she, and women in general, only goes to bars accompanied by a “chaperone”? Also, Lab tells us she can’t wear a mini-skirt even it’s if it's the only one she owns, and can't use public transportation after seven p.m. Then why are so many women wearing mini-skirts and other revealing garments, and why are so many of them on public transportation after seven? If she really thinks she “can't go to the club just to dance with my friends,” is it possible she’s being dramatic?

Some of the lyrics are incoherent: “Can't speak to any woman or look her in the eyes. It's so confusing, is it rape or is it just being nice?” Who’s unable to do these things—men in general? Who confuses rape with being nice? This line puzzles me: “I can't be wearing silk pajamas when I answer the door.”

Maybe I missed something and feminists are now fighting for this right, but I haven’t seen any protesters carrying signs about pajamas. I do know that if it’s late enough for you to be wearing pajamas, you better be sure you know who’s knocking before you open the door, no matter what you’re wearing, whether you’re a man or a woman.

The final line of the song is, “And I can't ever speak earnestly about all these fears,” but the reaction the songwriter received belies that claim. Lab’s gotten 125,000 retweets of “A Scary Time” so far and she’s appeared on Jimmy Kimmel—she’s become an overnight sensation by singing earnesty about her fears. Good things are in store for her.

If you have any doubt about the excesses of the #MeToo movement, then consider that its first two heroes were actors Rose McGowan and Asia Argento. The two became fast friends, but it didn’t take too long for McGowan to accuse Argento of forcing sex on a 17-year-old boy, and then for Argento to claim that her ex-friend was trying to ruin her with texts that she presented out of context. The 17-year-old said Argento raped him, and she said he raped her. What an unholy shambles, all under the banner of #MeToo.

#MeToo’s a valid movement, but it needs to be aware of the damage it’s capable of. The popularity of “A Scary Time” makes that even less likely to happen, however. Any man falsely accused will now have an even harder time if it happens now. This song’s the new #MeToo anthem because Trump said something when people were already stirred up about the Brett Kavanaugh confirmation hearing, but it’s disingenuous.