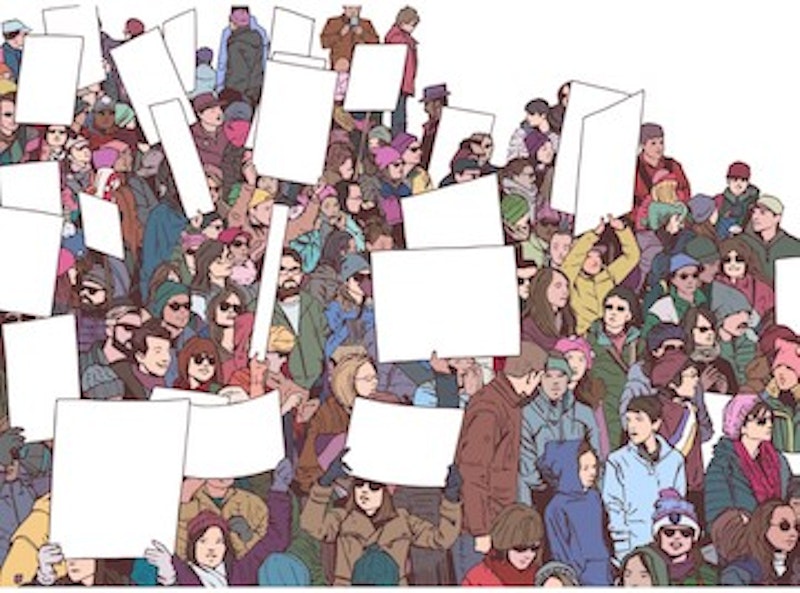 About 80 percent of Americans dislike political correctness, according to a study reported in the Atlantic. In fact, p.c. is slightly more popular among whites than other ethnic groups, which may confirm the long-held suspicion p.c. isn’t kindness and sensitivity emanating from the oppressed but an affectation of smug elites. They’re the ones least worried about whether politics sets us at each other’s throats because for them it’s a beloved hobby.

Then again, political polarization, a slightly different phenomenon than p.c. but surely one that overlaps with it, may be a good thing because it gives us clear-cut political choices, says a National Review columnist—who may sound perverse but actually echoes early/mid 20th-century thinking on this matter. Political scientists used to lament the fact that the two major political parties were so alike that the common person couldn’t tell the difference. I don’t think that’s our main problem now, though. Now we worry the two main factions are full of opposing extremists who’ll kill each other or make Thanksgiving dinner awkward.

Clearly, p.c. can yield hate in many areas of American life—though I admit so too can just plain hate-hate. Somewhere in between the rude yell of the right and the offended hiss of the left, I’m pretty sure there used to be something called civility that would seem to serve both factions’ best interests rather well. I mean, the right ultimately wants a society of conventional ladies and gentlemen and the left wants a world where people aren’t constantly insulting each other, or something like that, so maybe etiquette is the sanest solution rather than political codes or street brawls, eh?

When a Colbert writer or a Google executive tweets about wanting to see Republicans tortured or burned in Hell, the most effective response—the one with solid majority support, I’m still betting—would be to tell the world those Twitter users are rude rather than trying to figure out how to reorganize the nation or their respective companies to prevent people like those from ever happening again.

A refusal to politicize things is the biggest defeat the extremists on either side, but especially the left, could suffer. If we keep resolutely dealing with problems as matters of personal etiquette rather than collective political conflict, we not only short-circuit totalitarian schemes, we humanize individuals. It’s the humane, bourgeois thing to do.

I have to disagree with my fellow libertarian Brian Doherty on this topic to a degree, though. He goes so far as to say that the right’s warnings about creeping “Cultural Marxism” are essentially a hoax, an attempt by the right to smear apolitical weirdoes—anyone of an unusual sexual orientation or hair color, say—as part of a conscious leftist scheme to undermine civilization. Well, as I’m suggesting here, I do want all of those people to resolve their differences as polite individuals instead of political mobs, but Cultural Marxism, by contrast, has been a real plot by many on the left to set us at odds. The left started it, so to speak, not the right (at least in this round).

As I wrote a couple of months ago, back in college in the 1990s I met leftists who were quite explicit and literal about wanting to replace the failed Soviet economic model with a subversive cultural war inspired by Frankfurt School Marxists. Undermine bourgeois social norms and aesthetics, and you erode the very foundations of capitalist society, was the idea. The menace of Cultural Marxism is certainly not some hobgoblin dreamed up by the far right.

Of course, the schemes of academia may be of little relevance to the behavior of hundreds of millions of Americans who aren’t on a college campus, and most of whom never were. But we shouldn’t be too quick to let our guard down around those who would like to, say, turn every lesbian punk into a Stalinist foot soldier (and I’m not blaming the lesbian, to be clear).

Despite the real danger of resurgent racism and tribalism on the right, let’s admit that leftists have been race-obsessed/group-obsessed grievance-mongers for decades, and they’re not really hiding it anymore. They, not mainstream society, want a world where all of your benefits and opportunities hinge on which group birthed you. Mainstream society, imperfect though it surely is, mainly just wants peace and quiet.

Professors and students who take note of that Atlantic report about how much the rest of America hates p.c. should pause to ask themselves whether they’re truly more enlightened on these matters than those of us off-campus. Maybe the academics (young and old) need to begin thinking, at long last, about the possibility that they have a sort of Stockholm Syndrome, trapped on combative campuses and so becoming convinced that must be the model for all of society.(Some of the campus professors and activists of a quasi-libertarian bent have lately even attempted to infect libertarianism with the p.c. virus, whether in the form of sweeping “social justice” visions or just false, petty claims that libertarians have been cruelly indifferent to the suffering of marginal peoples, which is a lie and a serious betrayal.)

Before the campus activists and the professoriate make their next push, with the inevitable attendant revision in jargon, to tell the rest of us how to think and live, they might take note of a battle brewing in their own house. A lawsuit is being heard in federal court in Boston this week over whether Harvard discriminates against Asian students—not out of traditionalist or white-supremacist hate but simply by having affirmative action policies, which peg the number of students from a given ethnic group to the proportion of that ethnic group in the general population, restricting high-achieving Asians to something closer to the few percentage points they occupy on census forms.

The left will spin hard if affirmative action ends up looking oppressive—or even ends up being struck down by the Supreme Court one day—as a result of this case. And a libertarian argument can be made for letting Harvard have whatever crazy admissions policies it wants so long as it’s open and honest about them. But most of the public will get the deeper message that the enlightened tried to carve up the populace along racial lines and ended up hurting people. That should put an end to the current version of p.c. once and for all, if there’s real justice in this world.

Meanwhile, another word of caution: even in this #MeToo era, which is in some ways admirable, falsely accused men can sue. Maybe many groups who have stoically put up with p.c. nonsense for the past half-century will turn out to have run out of patience. I urge the left to try dealing with those people politely instead of politically (and the same goes for the right), while there’s still hope of salvaging things.