Jon Stewart Is to Blame

For what? Oh, the awfulness, says New York Times op-ed. 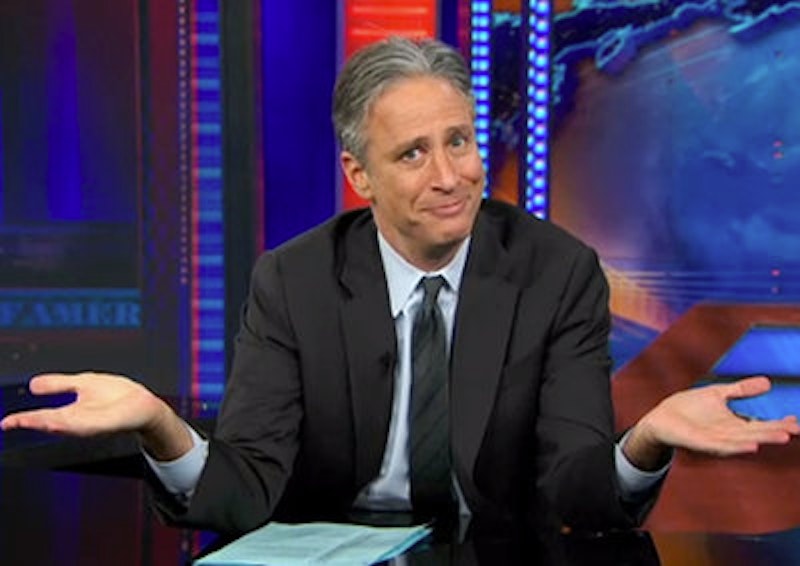 Now here’s a sweeping analysis. “The explosion of the smugs-versus-trolls phase of our political discourse is traceable to a 2004 confrontation between Jon Stewart and the political commentator Tucker Carlson in the waning days of ‘Crossfire,’” writes Katherine Mangu-Ward, editor-in-chief of Reason magazine, in The New York Times. She means that this broadcast is why conservatives have been trolling those smug liberals so ferociously. She gives no reasons for that belief, but I can give plenty against it.

First, the right has been trolling liberals, and trolling them hard, since Jon Stewart was a baby. It’s a need the right has, one that (in my opinion) inspires this unique tribe to its best mental efforts. Check out t-shirt designs from the late 1970s: “Nuke the Whales” is a beauty. Even better, look at Tom Wolfe’s “Radical Chic: That Party at Lenny’s,” published in 1970 and a masterly piece of lib owning. He baited us but good, and a ton of liberals ate it up and applauded because we’re like that. Being liberal, I’ll give Mangu-Ward the benefit of the doubt and emphasize her use of “explosion.” Maybe she means there’s a markedly greater degree of left-right hair-pulling. If so, the short answer is this: social media has exploded, and it’s done so alongside a series of public crises (the Clinton impeachment, 9/11, Iraq, Afghanistan, the 2008 crash, the Trump administration, life with firearm massacres). A shorter answer might be Jon Stewart and how he spent an afternoon in 2004. But I’d like to see some evidence and there’s none in Mangu-Ward’s op-ed.

Second, remember Paul Begala. He was co-host of Crossfire and Stewart laid into him along with Carlson. Stewart was there to talk against cable news and its showbiz tendencies, its pretend aspect. This aspect includes the rat-a-tat confrontations that Crossfire used to dish up. Cable news wants to see people shout, so the programs take an issue and turn it into a vs. b, thereby making us stupid. That was Stewart’s point (by clip or by transcript). Mangu-Ward acknowledges as much, but… well, watch.

The article makes this switch because Stewart’s Crossfire appearance, we’re told, is what hurtled conservatives into their relentless trolling of the left, and it’s implied that this reaction was self-defense: “For many on the right, the real lesson of the Stewart-Carlson exchange was ‘Do as I say, not as I do.’ Mr. Stewart urged sincerity and good-faith efforts at dialogue when lecturing Mr. Carlson but practiced the opposite when it suited him. Mr. Stewart’s smugness was itself a form of trolling. And conservatives, no matter what liberals might think of them, are not stupid. The clear lesson was if you want to win, stop being the debate team kid in the bow tie and start being the class clown who gives that guy a wedgie.”

Mangu-Ward wants to pretend that this response makes sense. Huh. First, she must establish that Stewart has a record of flouting sincerity and good-faith dialogue, as opposed to a record of making points the right doesn’t like in a tone it doesn’t appreciate. Second, she must establish that he made a call for niceness, as opposed to a call for a political discourse unstructured by the storytelling needs of the broadcast industry. Third, how did she get “Mr. Stewart’s smugness was itself a form of trolling”? Fourth, can we pin down the smugness? What did Stewart do that was smug?

I always found Stewart, as on-air personality, to be Mr. Cutesy; he was so pleased with those faces he pulled, and he indulged himself with sloppy, trail-on interview questions. But that day on CNN he didn’t rub his nipples at Carlson. We’re told he said something, made a point that counted as smug, and this smugness was so great that it set the American right on course toward its Trump-level beastliness. What did he say? If, as the article implies, he came out with something insufferably high-minded and then, in practice, transgressed against his lofty proclamation, can we see the quote and be told the transgression? Well, no. We can’t even be told what smugness means. Word search reveals that the article uses “smug” and its derivatives almost a dozen times. But the word is never defined and only one example is given. What we’ve got here is a leitmotif, not an argument.

What Mangu-Ward means, but can’t say, is that a liberal is smug if a liberal makes a point instead of keeping quiet. When a highly visible liberal speaks at length and a conservative looks bad, that liberal must have been frightfully smug. The consequent revulsion explains all that follows, and there we have Mangu-Ward’s history of American political dialogue in the 21st century. This belief of hers is sub-intellectual and almost sub-mental. It doesn’t look for cause and effect; it looks for somebody famous and slaps him in the middle of the author’s fantasy. The result is inane, self-serving, and cockeyed, and the perpetrator of this blotch calls the shots at one of our better-known publications against the left-liberal agenda. Does this surprise me? No, and don’t pretend that response is smug. I know despair when I feel it.