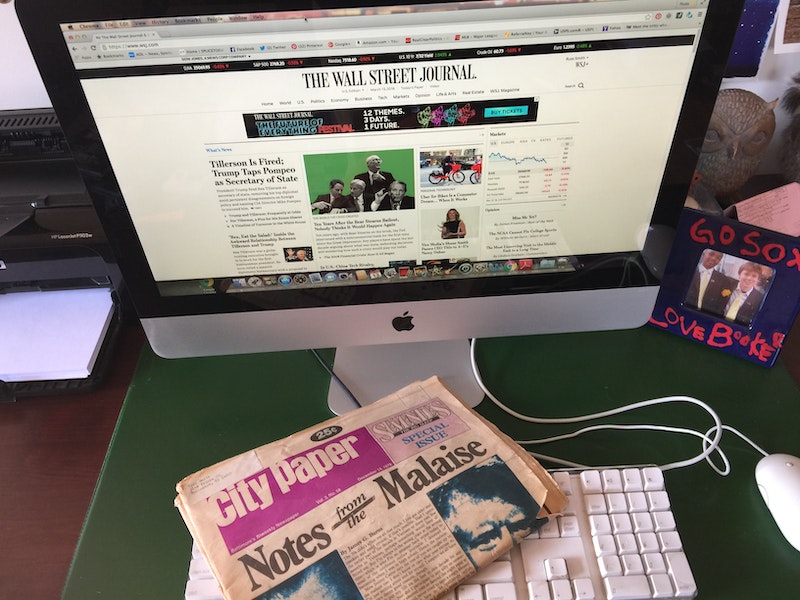 The single best sentence in Farhad Manjoo’s irritating New York Times story about the virtues of taking a break from following news online came at the end: “Farhad Manjoo will be taking a leave of absence from the column to write a book.” I wonder if the “book” break is a cover: maybe Times editors decided their technology writer had worn out his welcome and this was a graceful explanation for his sabbatical. Unlikely, I suppose, since there’s little evidence that many editors are actually left at the Times, and this isn’t how a company mired in quicksand operates.

Manjoo’s unsolicited how-to primer about negotiating the news—presumably, and condescendingly, for younger readers—was offensive for more reasons than the number of Bob Dylan bootlegs I own. First, it’s an unoriginal idea, although usually phoned in by someone older than the author, who’s 39. And, like other belated, and by now anachronistic, entreaties about the everlasting glory of print newspapers and magazines, the lessons Manjoo lays down will be ignored.

Did you know that social media is a fast-moving medium that’s often fouled with unverified information and vulnerable to bad men and women manipulating what consumers read? Or that digital platforms are usually aimed at people who already agree with their content? And that print, for people under 30, is the least important source for keeping informed? I’m joking, entirely, for you and I have read some version of Manjoo’s manual several times a year since at least 2008. The only difference now is that these stories have become more pathetic and self-serving.

He writes: “In January, after the breaking-newsiest year in recent memory, I decided to travel back in time. I turned off my digital news notifications, unplugged from Twitter [although a Columbia Journalism Review story hilariously—the first time CJR’s been hilarious in years—debunked this claim, providing evidence that during Manjoo’s time-travel he was in fact active on Twitter] and other social networks, and subscribed to home delivery of three print newspapers… plus a weekly newsmagazine, The Economist.”

Whether or not Manjoo’s telling the truth—and I doubt it—doesn’t really matter: it was a waste of column inches (although I read it online). How many funerals and wakes are (mostly) older media professionals and diligent citizens expected to attend and eulogize the slow death of the newspaper? Reluctantly, for I don’t care for the likes of Vox, BuzzFeed, The Huffington Post or The Daily Caller, to cite just four horrific websites, I’ve moved on and reconciled that the business I’ve earned a living in since the mid-1970s has come and gone. There’s no upside in gnashing your teeth about it; if you follow current events, you accept what’s now on offer, which is a media that’s amazingly a grubbier gutter than ever before. Which is saying something.

Really, who needs to read this shit: “Now I am not just less anxious and less addicted to the news, I am more widely informed (though there are some blind spots). And I’m embarrassed about how much free time I have—in two months, I managed to read half a dozen books, took up pottery and (I think) became a more attentive husband and father.”

Maybe his real or imaginary book will be a picture-laden coffee-table (in time for Christmas) number about his pottery accomplishments.

Manjoo claims that reading print newspapers (The New York Times, Wall Street Journal and local San Francisco Chronicle) has given him more accurate information, for the hard-working journalists producing the stories have had time to chase down facts and digest breaking news. In truth, most, if not all, of a daily’s news stories are available online 12 or more hours before a print subscriber’s edition is delivered and they’re identical. If updates (or, for the papers that still issue corrections) are called for, they appear digitally. And it’s not just news stories: last weekend I read the nothing-new-under-the-black-sun profile of Keith Richards in The Wall Street Journal’s magazine. It was stale (although not to me) since it first went online Feb. 28th and Richards had already tweeted that he apologized to Mick Jagger for a nasty crack about his bandmate that appeared in the story.

There are benefits to following Manjoo’s advice. At least for now, print publications don’t ape Internet language—“I’m so old I remember when…,” “I’m so tired of all this winning,” “So yeah, I wrote this thing,” “idk, it might be super-smart for Democrats to renounce Pelosi,” and “I quite literally needed two cups of coffee this morning”—but I suspect that won’t last long. I don’t read the Times’ Gail Collins, and it wouldn’t be surprising if her too-easy-to-parody columns are larded with such linguistic atrocities.

I’ve tangentially followed a Twitter/Facebook squall from “progressive” Democrats who complain the Times’ op-ed page has become too conservative (don’t fret! Bret Stephens will shill for Bernie starting in December!), and it’s very silly. Aside from the now really weird Washington Post—which seemingly, loaded with Bezos cash, publishes anything it receives—there’s not a more liberal paper than the Times. Better for the progressives, if they’re really interested in the future of the “Gray Lady,” to aim their fire at drivel like Manjoo’s.