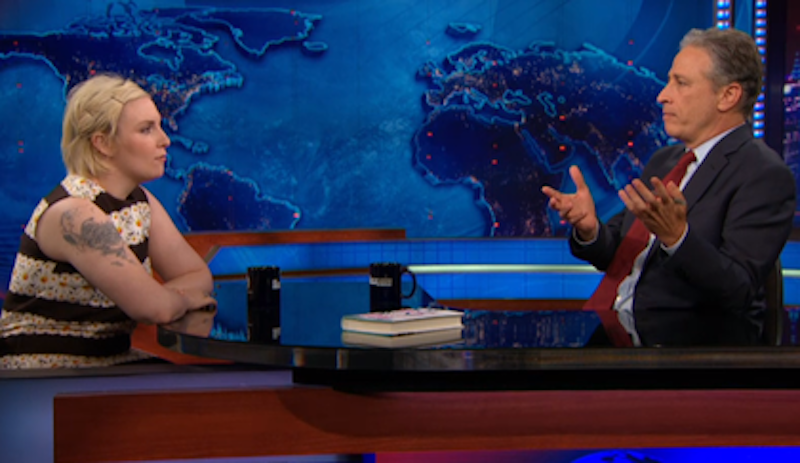 Jon Stewart to Lena Dunham: “You know, you know what I very much admire about you, your ability, uh, at, at a young age to articulate motivations of your behavior that even you don't, uh uh, that, that—to understand yourself well and, and the reasons you behave in ways that, you know, you end up being self-critical of and things like that. [With marvel:] Your ability to understand that, where does that come from?”

He just sprawls out there. Old-time TV interviewers were supposed to be incisive. They had salt-and-pepper hair and crinkled their eyes as they looked past the smoke from their cigarettes. “The nub of the gist,” one of them might say. “In this case it's better to be pulled than pushed. Is that fair?” A careful nod from the arms control negotiator or the consumer activist or the professor with a book. “I think that's on the mark,” the guest might say, measured.

Today we have Jon Stewart trying to haul his thoughts from past his tonsils and within range of the table: “your ability, uh, at, at a young age to articulate motivations of your behavior that even you don't, uh uh,” and so on. He's trying to say that Lena Dunham, in her new book, shows a lot of self-awareness about her motives. She's on to herself, or the younger self that she's writing about. This isn't a difficult or new idea; you expect the writer of a good memoir to be on to herself. But Stewart takes his 25 seconds to wrestle with that squid of a sentence. If he can just get it out of his mouth, he'll know he will have said something worth being said.

He pulls this kind of thing with celebrities like Dunham, and he pulls it with ambassadors and policy experts and human rights activists. A guest's importance and/or poignancy can cause him to cut back, but the sentence bobbling doesn't go away completely. Hillary Clinton decided not to let him speak; she amiably drilled past him. Bill Clinton, more august, settled back in his chair and put up with the occasional trace element of Stewart bobble. Go down the ladder and those trace elements expand fast. A governor will smile, trapped, and watch the half-minutes trundle by.

Stewart doesn't take up time by preening—he doesn't try to frame an epigram or winkle out some fragrantly nuanced verb. He's just trying to get his act together. The thing is, he's in no hurry to recognize that his act is very far apart and needs emergency measures. He can go ahead and pile up the seconds. The guests don't jump in and they don't point to his fumbling as a sign that maybe they know more than the host. Everybody has agreed that Stewart's brain deserves this extra time to thrash out the one question that must be asked, whatever that turns out to be.

The audience knows what airtime is worth. So does everybody within a thousand feet of Stewart, and most of them care intensely about how the airtime is spent. They know what Stewart is doing with the pile sitting between him and the guest: he's taking big mouthfuls and he's being sloppy about it. I'm not saying his guests would be right if they whipped Stewart's head with his verbal ineptitude; people who fumble can still be on to something. But he doesn't have to wallow in his ineptitude.

My theory, an incomplete one: broadcast media turn seconds into gold, so wasting those seconds counts as conspicuous consumption. Jon Stewart, who on the whole comes off as a humble enough fellow, has found a way to backdoor preen by letting his thoughts gargle in his throat before they present themselves. But why him, why now? I can only suggest that the old-time salt-and-pepper types, the laser-eyed men with their erect cigarettes, all faced competition from one another. Today we don't need a crew of them. Just a couple will do it, and they can handle the duties part-time, on top of reading jokes and helping stars talk up projects. Stewart is the interviewer who's watched by young people, the youngish and a lot of the middle-aged. You want them, you go through him, and you mind your manners when you do it. The man is going to take his time.