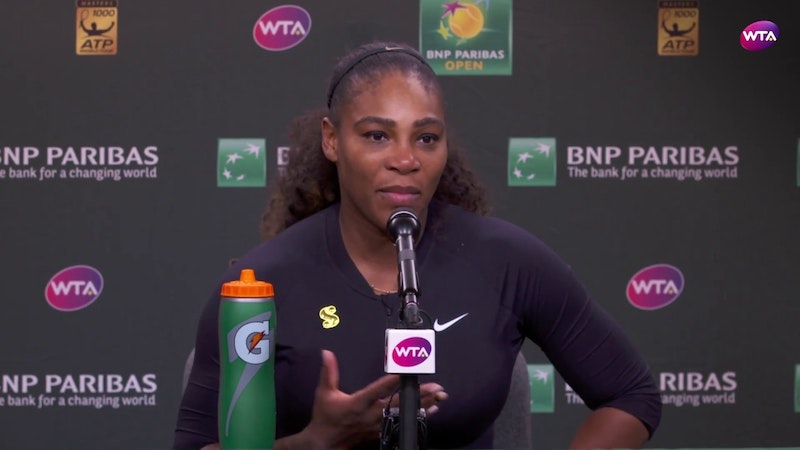 On March 9, at the BNP Paribas Open in Indian Wells, Ca., a reporter asked Serena Williams about a backdated “therapeutic use exemption” she said the tennis player had received for taking a prohibited substance around the time of the 2015 French Open championship. T.U.E’s are granted to players when their medical condition requires they take a normally banned substance, which in this case was a decongestant.

Williams, who didn’t appreciate the inquiry, proceeded to explain, without rancor, that she's never tested positive for banned substances. She instructed the reporter to do some fact checking. The tennis superstar then went on to explain why she’d never try to give herself an unfair advantage with artificial help. She didn’t raise her voice or betray any hostility towards her interlocutor.

Ben Rothenberg, who writes about tennis for The New York Times, tweeted that Williams and the reporter had engaged in a “heated exchange,” an inaccurate characterization of the interaction that brought swift opprobrium down upon him. Williams’ fans are legion, and many of them are particularly sensitive towards any comments that may have a negative racial undercurrent, which some detected in this case. One of her supporters came back with, “How dare a black woman speak her truth!”

As it turned out, Rothenberg hadn’t even seen the video. He said on Twitter that he'd relied on an audio recording. Still, he felt comfortable commenting on the story publicly. Then, in a surprising development, the writer admitted to having “an embarrassingly shoddy handle” on the word “heated,” which most eighth-graders probably understand, explaining that he'd always thought it just meant “a bit tense.” To illustrate his point, he included a collection of synonyms for the word from an online dictionary, which included “acrimonious,” “bitter,” and “feverish.”

An angry mob on Twitter dragged Rothenberg hard, with many suggesting that he'd been unfair towards Williams in a manner that played into racial stereotypes. Eventually, this prompted his admission that he'd “unequivocally” used the wrong word to describe the tennis great’s response.

Then there was this: “And I understand that such a mis-characterization evokes the unfair demonization and diminishment that women of color have faced with ‘angry black woman’ tropes. I understand that reaction, but please believe that it was not remotely my intent to paint Serena in any such light.”

The irony of the writer imploring people to believe that he had no bad intentions wasn't lost on those who remember that ESPN announcer Doug Adler was once in the same situation and that one of the prominent people who declined to give him the benefit of the doubt was Rothenberg. That was when Adler was calling a Venus Williams match at the Australian Open last year and he referred to her “guerilla effect,” an obvious reference to her on-court tactics, which Rothenberg incorrectly heard as “gorilla effect” and implied on Twitter that Adler had made a racial slur.

Rothenberg, as a representative of The New York Times, stoked an online mob that day, which led to ESPN’s cowardly firing of a person who’d done nothing wrong. Adler had a heart attack shortly after, which his doctors attributed to the stress he'd undergone in losing both his career and reputation overnight. Rothenberg has never spoken a word to Adler, neither to ask him what he'd meant that day nor to apologize. He did, however, express his annoyance with the former All-American tennis player for tweeting at him in all caps one time.

It's hard to find much sympathy for a man who once was eager to impugn another person in the tennis business but still wants understanding when he's in the same hot seat. Before the Adler incident, some had suggested that Rothenberg had written a racist and body-shaming piece on Serena Williams for the Times in 2015. He also claimed innocence at that time, but felt no compunction about giving the same treatment to Adler shortly thereafter.

The Adler incident showed that Rothenberg doesn't know the game he covers very well (“guerilla tennis” is known in the tennis world), in addition to revealing that he doesn't hold himself to the most basic ethical standards of journalism. This current situation indicates that he still comments on things he doesn't understand and that he may lack the vocabulary to write for a publication that once had people like novelist David Foster Wallace writing about tennis.

Despite the numerous accusations against Rothenberg over the course of his career, I wouldn’t say that he's a racist. I’d only say that he's unqualified for his job and lacks empathy for someone he's wronged seriously. That people are ludicrously claiming that Rothenberg's amateurish use of the word “heated” was racially-oriented is simply testimony to the stupid times we live in, when people are just looking to tear others down for any perceived offense they can come up with. Ironically, for Ben Rothenberg, he's been a part of creating these stupid times.