Jeb Reminds Us Why the Bushes Suck

There's something in the Middle East we're all supposed to be scared of. 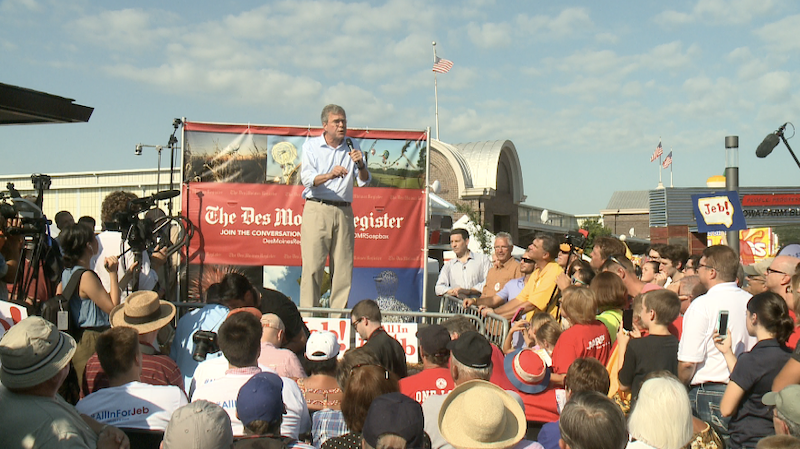 “A caliphate the size—larger than Iowa,” Jeb Bush says. He's at the Iowa State Fair. “Thousands and thousands of trained forces organized to destroy Western civilization,” he continues. “I'm not exaggerating. Today the FBI director says the thing that keeps him up at night is home-grown terrorists. They're inspired by ISIS.” I like that switch. We hear how terrible ISIS is. Then we hear about the one thing that really scares the boss of the FBI. That thing, as it turns out, is not ISIS. Then Jeb pretends he just demonstrated how scary ISIS is.

I remember in the old days. George W. would stand on one foot and reach around his back, trying to make it sound like Saddam had something to do with al-Qaeda. Now Jeb with his ISIS and his homegrown terrorism. And those forces organized to destroy Western civilization—“thousands and thousands.” George got people scared about an Iraqi atomic bomb. Jeb doesn't have that kind of material.

“Each and every day that they exist, they gain more power, they recruit more people,” Jeb tells the people sweating in Iowa. Every day that we don't destroy them, they do all right. Therefore, we must destroy them. Jeb calls that “taking out,” as in “We should be taking out ISIS.” Breezy, but that was the style of W's crew, especially when it came to messing about the Middle East with our soldiers.

A friend once told me about little Gypsy kids in Rome who tried to scam her. She caught them the first time, and then they tried the same dodge—it involved some shoelaces on cardboard—all over again, and then again. Not bright enough to vary their routine. Well, here in the U.S., once again we're supposed to be so scared of something in the Middle East that we have to let a Bush do something—whatever the Bush figures is best. “We should have a strategy to deal with ISIS, rather than admit we don't have one,” Jeb says, because of that time Obama said his people were still putting together their ISIS strategy. Jeb seems keen on strategy. “We will have s strategy on day one to take out this grave threat too our national security and to the world,” he says. “I promise you that.”

Imagine. A Bush facing the public, and he figures there's one thing everyone wants to hear: that he'll have a plan to get us deeper into Iraq. He promises to have such a plan! “We need a competent leader who will accept responsibility,” says the brother of George W. He has no idea how that sounds coming from him. The Bushes are children.

Scout report. They say Jeb is out of shape for campaigning. They aren't wrong. Physically, Scott Walker looks like he's been honing himself to a fine edge (for whatever good that's done). Jeb looks like something big that has crumpled. Put him under the sun in a white Oxford shirt and he's a depleted sofa cushion, a cushion with two overlarge arms clipped to its sides and his great noggin placed on top and listing forward. Getting through his speech, he sounded like someone getting through a speech. He was much better at taking questions, which I suppose is a good sign.

Upside view, there are reasons people thought he could pull off the race, and some of these reasons haven't gone away. His voice is good, and it sounds like the voice of a manly man who might ruffle a little kid's hair. One imagines radio announcers in the Midwest taking a moment to respect Jeb's modulation. Jeb has a knack for joshing with the crowd, and for seeming like life feels pretty good to him even though there are heavy chores that need doing. His backers say he's sane, down-to-earth, that he's responsible but pleasant. That's how he comes across. But he's also a depleted pillow using turn-of-the-century GOP lie tactics as if they were new.