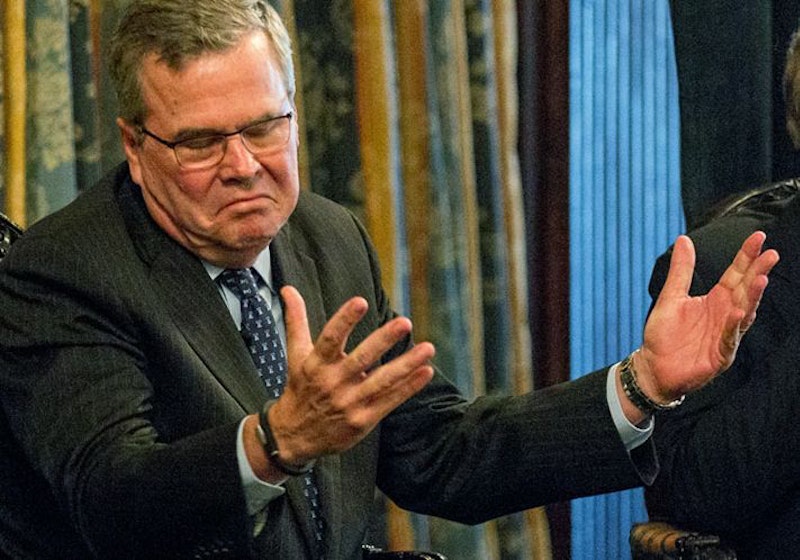 On Monday, I’d have bet two bits that haggard New York Times op-ed columnist Frank Bruni would’ve weighed in on the paper’s long hit job on Jeff Bezos and his company Amazon that ran on Sunday. It was a natural for Bruni: income inequality, corporate behemoths run amok, mourning the loss of independent retailers and a sense of bewilderment at the strange America of 2015. Maybe, if he were feeling energetic, Bruni would’ve noted that the Amazon article buried the fact—which belonged in paragraph one, two or three—that Bezos also owns The Washington Post, which is competing with the Times on the digital front. Good thing I didn’t make that wager.

Instead, Tuesday’s column was another display of Bruni on auto-pilot: he goes out on a limb and writes that Jeb Bush’s campaign isn’t going according to plan. It’s entirely possible that the Times veteran doesn’t read any political articles aside from his own, but even then it’s astonishing that a copy editor (remember them?) didn’t give Bruni a call, and say, “Hey, Frank, anybody home?”

Bruni starts off wrong: “In politics, the smallest things often turn out to be the most telling ones, and so it is with the man [Bush] who was supposed to be the Republican front-runner, who once inspired such rapture among party elders and whose entrance into the presidential race they yearned and clamored for.” Really? Where was the “rapture”? Jeb’s own mother said, in a soundbite widely quoted, that America’s had enough, for the time being, of the Bush and Clinton families. I suppose it’s possible that “elders” like James Baker, Karl Rove and Paul Wolfowitz, as well as the campaign donors they’re cozy with, were in favor of a Bush run, but it was only in the mainstream media that the man with a (temporarily) damaged last name was considered a front-runner. In fact, long before Jeb officially announced his candidacy (while raising money at a whipsaw pace), Gov. Scott Walker had eclipsed him in the polls. Walker’s since dropped back—his own fault, muffing foreign policy questions as if he was a middle-aged man who’d never once left Wisconsin—and even fellow Florida Sen. Marco Rubio didn’t play 20th century politics and defer to the man who was considered his mentor.

It gets worse: "’I’m the tortoise in the race,’ [Bush] told a group of Florida voters not long ago. ‘But I’m a joyful tortoise.’ And Donald Trump’s a demented peacock and I’m a crotchety hippos. Reverse anthropomorphism is a fun game, but if you’re playing it in the service of selling yourself, best not to summon a sluggish creature with a muted affect and an impenetrable shell."

What? I’d no idea that “reverse anthropomorphism” was such a kick—never played it myself—but it’s not like an invocation of “the tortoise and the hair” hasn’t been a political cliché since at least 1948. Fact: Jeb is a crummy candidate. Allegedly more glib, off-the-cuff, than his brother George, Jeb’s miscues—on ISIS, abortion, garbled positions on immigration, hiring his father’s geriatric advisers—might not even merit a chapter in the countless 2017 books on next year’s election. That’s how desultory his candidacy is: far from a “front-runner,” Jeb’s campaigning like an also-ran. He looks good—lost a lot of weight, unlike Donald Trump, whose beefy, sweaty bod must worry his family that he’ll keel over at some point—after shedding weight, and he’s tall, but that’s about it.

Bruni shares his insight with readers, writing, as if he’s been in a restaurant or movie theater for the past six months, that voters are “alienated” and “enamored of outsiders,” like Trump and Bernie Sanders. No shit, Frank. I risk repetition commenting on the sclerotic roster of Times op-ed columnists, but it’s still a head-scratcher as to why Times management, which boasts about its uptick in digital subscribers (but not revenue as a whole) lets its onetime popular writers, now out of gas, burble on about subjects that are either dated or self-promoting.