He doesn't measure up. 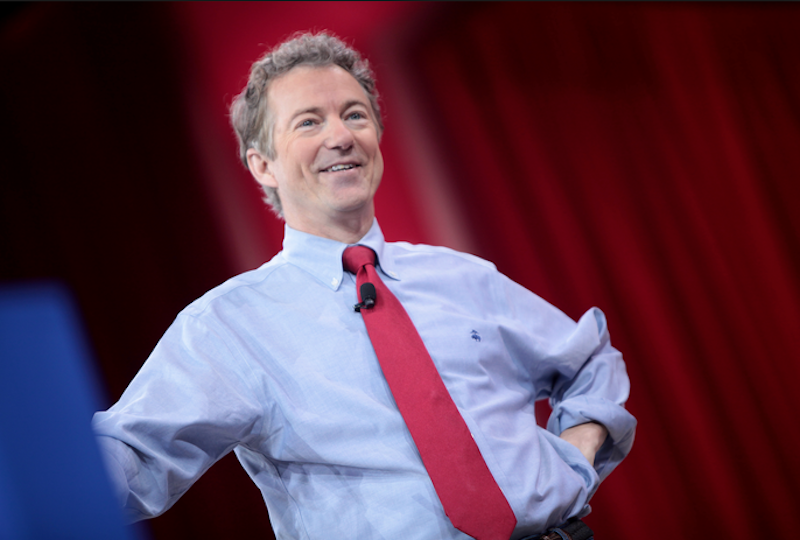 Rand Paul is coming into focus as a man whose mouth keeps tripping him up. He just said Donald Trump's children were spoiled, basically. "If we're talking about who's a spoiled brat or not, my two kids all work minimum-wage jobs," Paul said to some reporters. "Do you think the Trump kids have been working at the local Pizza Hut?" Trump had issued a tweet saying, "Truly weird Senator Rand Paul of Kentucky reminds me of a spoiled brat without a properly functioning brain. He was terrible at DEBATE!" With all that to respond to, Paul opened his mouth and insulted the other candidate' children. He thought he was making a point, too, turning the situation on his opponent.

No response from Trump that I've seen. Possibly this is something he can let pass, like the yipping of a dog. “You're having a hard time tonight,” Trump said in the debate, patronizing. It was true and Paul seems determined to wear the fact. He's drowning, not waving, and he puts energy into it. “News flash!” he blurted at the debate, and “Hey, look, look!” He was jumping out of his shoes, and his voice is naturally high anyway. With his nest of curls wagging, he looks like a male cheerleader who's ticked about something and wants to act it out.

At a campaign stop, Trump took note of a Rand Paul attack ad (not of the Paul comment about Trump's kids) by leveling a hand in front of his chest. “I've had it up to here with Rand Paul,” he announced, and everybody laughed. Paul is short and easy to dismiss. But he just insulted Ivanka Trump, the apple of her father's eye. Maybe she pleaded with her dad to let it pass; she's a nice girl and a moderating influence, one reads.

A candidate who's talking about Donald Trump isn't talking about the federal government, which makes Rand Paul a misfired candidate for libertarians. True, he has staked out something new in public life, but it's this: a candidate can roll his eyes at 9/11. Rand Paul did so in the debate, when he didn't like something Chris Christie had said. The something involved hugging 9/11 victims, and Paul's eye roll was an embossed beauty, a demonstration of an eye roll, an exhibit ready-made for YouTube. Yet it has done him no harm. Instead of batting off questions about his patriotic loyalties, he's hopping up and down about Trump.

Paul is the presidential version of his dad. Ron Paul seemed to be a role written for some beguiling old character actor, a crickety fellow who chirped in a frazzled way of nice, unworldly things (we didn't really need the government, we shouldn't be mean with our missiles, things ought to be fairer for blacks up before judges). The son is taller and broader, and he's aggressive. Rand Paul comes off as a quick-witted, sharp-eyed fellow unimpressed by your bullshit. A few slices by his tongue and he'll cut through it, and you'll both be talking some sense for once. Given that Paul jawed his way into the Senate, he has probably lived the experience I just described. It may even be common for him. People spend years remembering the one time they pulled off a discussion like that, when the moments fell together and the poor chump proved as smart as they always suspected, and the other person gave way, acknowledged the chump's rightness and mental supremacy. My guess is that moments like this add up to Rand Paul's reason for thinking he, personally, ought to be boss of the nation. His father just wanted to spread a message, but the new Paul thinks America needs him as its leader.

But now he's floundering. “News flash!” Watching him in the debate, playing tumler on that crowded stage, I thought of how superheroes have proliferated until now they have rankings. There are mighty superheroes like Batman and lowly ones like Blue Beetle. In either case they're a notch above ordinary humans. They have iron-molded physiques the way your natural contender for president has an iron-molded emotional structure, one that lets him look at the weight of government and think Yeah, give that to me. Or that lets him jump into a noisy dispute before 25 million people and then roll his eyes when it doesn't go his way, and then pick up the next morning and keep telling people he ought to be president. Even though they're not listening. Rand Paul is capable of deeds that go beyond the human as I know it. Yet he doesn't measure up. Among these creatures—the candidates—there are big ones and small ones, and Rand Paul is there for scale.