Conservative Gospel, based on misinformation. 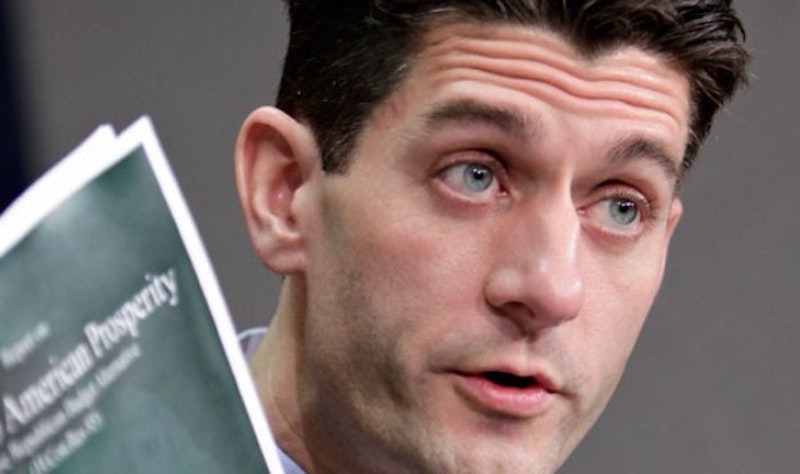 The day after President Obama delivered his inspiring Tucson speech, New York Times columnist Paul Krugman wrote that the quest for compromise is utterly quixotic because the two sides of our political debate can’t agree on basic principles. One believes the safety net is a moral imperative, while the other considers its very existence immoral; one side perceives government the key driver of prosperity, while the other views it as the enemy, and so on. Last week’s State of the Union address and Republican responses illustrated this paradigm quite clearly. While Obama expressed a desire to work with Republicans, Reps. Paul Ryan and Michelle Bachmann emphasized the need to repeal health care reform and dismantle the President’s agenda.

All this would be fine in theory. As Obama said, we always argue about everything, and compromise is the pillar of our democracy. But the Republicans do not want compromise. And this becomes obvious when we consider that every single major point raised in both Republican rebuttals was based on a transparent lie or a nasty half-truth designed to attack Obama.

It’s not necessary to spend much time dissecting Bachmann’s diatribe, since she discredits her argument by implicitly comparing Obama to World War II tyrants and once again repeating the non-partisan politifact.com’s lie of the year, that “unless we fully repeal Obamacare, a nation that currently enjoys the world's finest health care [a dubious claim in itself] might be forced to rely on government-run coverage.” The only important thing about her speech is that, in representing the Tea Party, she proves what everyone must understand about this movement—that its political ideology is steeped in disinformation.

But what about Ryan? Ironically, his speech was worse. As a face of the Republican Party, he had to exert some self-control by omitting terms such as “Obamacare,” “government takeover,” and “socialist,” but his message was identical to Bachmann’s, and his address was filled with falsehoods.

On the economy, he lied about the impact of the stimulus and the level of government spending. He asserted that the stimulus package “failed to deliver on its promise to create jobs.” At best this implies that the Recovery Act failed to create as many jobs as expected, and at worst this means it created no jobs at all. Both claims are false, as many independent analyses have confirmed that the stimulus created or saved between 800,000 and 2.4 million jobs, and the CBO says the figures are between 1.4 and 3.6 million.

Ryan also sought to misinform America by claiming that under Obama discretionary spending, or, as he called it, money allocated to “domestic government agencies,” has increased by 84 percent when including the stimulus and almost 25 percent without it. The first figure is grossly inaccurate. As politifact reports, 84 percent applies only to the fiscal year 2009, when most of the stimulus money was distributed. But in total, when we calculate expenditures over two years, including stimulus, the amount is around 25 percent, as 2010 saw a significant decrease in spending.

More broadly, Ryan intended to create the illusion that Obama has drastically expanded the size of government. At one point he declared, “the size of government is at an all-time high.” In reality, as politifact pointed out late last year, “federal and state government jobs… have increased by 1.7 million in eight years under Bush and fallen by 357,000 since President Barack Obama took office.” Furthermore, spending as a percentage of GDP has been around 25 percent under Obama, nowhere close to the all-time high of 43.6 percent during 1943-44, according to the non-partisan factcheck.org. Ryan may have avoided calling Obama a socialist, but his distortions of government‘s size and spending are designed to characterize the president as such.

Predictably, Ryan’s comments about health care reform continued this trend of misinformation. He charged that “the President's law is accelerating our country toward bankruptcy” when in fact the non-partisan CBO predicts reform will reduce deficits by $143 billion over the next 10 years and that repeal would add $230 billion (pdf), which makes laughable Ryan’s purported commitment to cutting costs and replacing “Obamacare” with fiscally responsible legislation. Ryan also blamed rising premiums on reform, which, as factcheck.org reports, is a huge exaggeration; the prime culprit is skyrocketing healthcare costs, and mandatory insurance pools designed to lower expenses won’t fully be in place until 2014. He then claimed that “millions of people will lose the coverage they currently have,” another half-truth exposed by factcheck. The Affordable Care Act will cover over 30 million Americans who are currently uninsured.

His last lie about reform, that it has “stifled job creation,” is based on blatant misrepresentations of various studies according to factcheck, and it touches upon perhaps the biggest overarching issue of the state of the union. What’s really at stake here is the ideological battle over the role of government, which, ever since the Reagan revolution, has come to be popularly perceived as “the problem.”

President Obama admirably laid out the case for government intervention, citing the mission to the moon, the Transcontinental Railroad, the Interstate Highway System, and the Internet.

But according to Ryan and co, it is “limited government, low taxes,” and “reasonable regulation” that “has done more to help the poor than any other economic system ever designed.” A simple glance at the historical record eviscerates this outlook. Between Kennedy and Reagan, when top bracket tax rates were consistently between 70 and 90 percent and the New Deal/Great Society welfare state was still strong, poverty decreased dramatically, but between Reagan (specifically 1987) and today, when the top one percent has paid between 28 and 39 percent in taxes and Republicans have hacked away at regulation and the safety net, the number of people living in poverty has shot up, in an era characterized by shocking growth in inequality (the top one percent now earn 23 percent of all pre-tax income compared with nine percent in the 1970s), reduction in benefits (the average amount in a 401 (k) in 2008 was a mere $12,655) and decline in membership of private sector labor unions (down to seven percent of all workers, compared with nearly 25 percent in the early 70s), as the authors of Winner-Take-All Politics explain.

This makes Ryan’s pathetic attempt to promote himself and his party as providers of “a safety net for those who cannot provide for themselves” utterly disingenuous. It’s also false in its own terms, since at another moment during his speech he referred to the safety net as “a hammock, which lulls able-bodied people into lives of complacency and dependency” in the context of rising debt.

While Ryan’s purported obsession with the debt (let’s not forget that he voted to increase the debt limit twice when George W. Bush was in office) is warranted, since we are indeed headed for eventual catastrophe at the current rate, now’s not the time to focus on this problem, since fiscal austerity is the last thing we need with an unemployment rate over nine percent—imagine the devastation that would be caused by firing hundreds of thousands of police officers, teachers, and firefighters, shuttering countless schools and public construction projects, and slashing unemployment benefits for the millions without jobs. Like most mainstream conservatives who feign concern over deficits and nonetheless idolize Ronald Reagan, the man who popularized the idea of running structural deficits in times of prosperity, paving the way for Bush 43 to continue this policy, Ryan is obviously just bashing Obama by blaming him for (responsibly) engaging in deficit spending to stave off a depression (something President Hoover failed to do) created by 30 years’ worth of conservative free market fundamentalism. His rebuttal, together with Bachmann’s, reinforces the notion that conservatives consider taxing Americans a sin, the welfare state immoral, and their leaders have to lie to make their case to America.